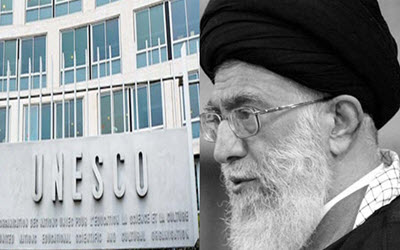 NCRI – On May 7th Iran regime’s Supreme Leader, Ali Khamenei officially stated his regime will not abide by the UNESCO 2030 initiative terms to expand and equalize education for all.

The cabinet of Iran regime’s President Hassan Rouhani that signed the document last winter was not obliged to do so, he added.

In this initiative, what Khamenei has stood firmly against, is the issue of gender equality in education.

“One of the main mistakes of Western mentality about women is raising the very issue of gender equality,” Khamenei said prior to this.

Khamenei and his faction believe Iran has its own culture and there is no reason for Iran to sign a document that others have prepared for us, and thus destroy our own culture?

In the face of this misogynist Iranian regime, the 10-point-plan presented by Iranian opposition leader Maryam Rajavi, reiterated once again four years ago at a gathering of over 100,000 Iranians in Paris (meaning three years prior to the 2030 UNESCO initiative adoption), sheds light on two different viewpoints in this regard. Article 5 of Mrs. Rajavi’s 10-point-plan states:

“We believe in complete gender equality in political, social and economic arenas. We are also committed to equal participation of women in political leadership. Any form of discrimination against women will be abolished. They will enjoy the right to freely choose their clothing.
They are free in marriage, divorce, education and employment.”

Previous articleKhamenei: Anyone Acting Against National Security Will Receive “Slap in the Face”
Next articleKhamenei Bans Talk of 1988 Massacre in Sham Election Campaigns