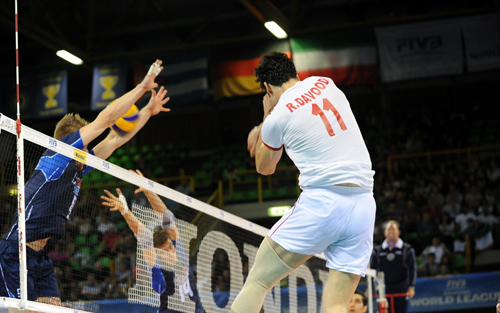 ‘The entry of women at volleyball matches is forbidden,’ an official of the Iranian regime’s volleyball federation said on Friday, state-run ISNA news agency reported.

As part of the International Volleyball Federation’s (FIVB) 2015 World League, a match between Iran and the United States is scheduled to be held in the Azadi Sports Complex in Tehran on Friday.

The Iranian regime previously prohibited women from attending an international men’s volleyball match in June 2014, in contravention of the principle of gender non-discrimination in sports.

State-run ISNA news agency reported on June 17, 2015 that a source inside Iran’s volleyball federation had confirmed that the “entry of all women to the Azadi Sports Complex during the World League matches has been prohibited.”

In November 2014, the International Federation of Volleyball (FIVB) sanctioned Iran from hosting international events for as long as women are not allowed to watch games.

A spokesman for the international federation told AFP on 9 November 2014 that the FIVB will “not give Iran the right to host any future FIVB directly controlled events such as World Championships, especially under age, until the ban on women attending volleyball matches is lifted”.

“This does not include other volleyball tournaments or next year’s World League tournament because the fixtures are already confirmed,” the spokesman added.
The Iranian regime’s then police chief General Esmail Ahmadi Moghaddam said in June 2014 “we cannot allow the presence of women in stadia” because gender mixing “is not yet in the public interest”.

The current Iranian regime’s police chief said on Thursday his forces have acted based on their natural duty in banning the entrance of women into sports stadiums or cancelling various music concerts.

The commander of the police Hossein Ashtari said in a trip to Qom: If we prevent the presence of women in concerts and sports stadiums, we are acting based on our natural and sharia duty,” the state-run Entekhab website wrote.