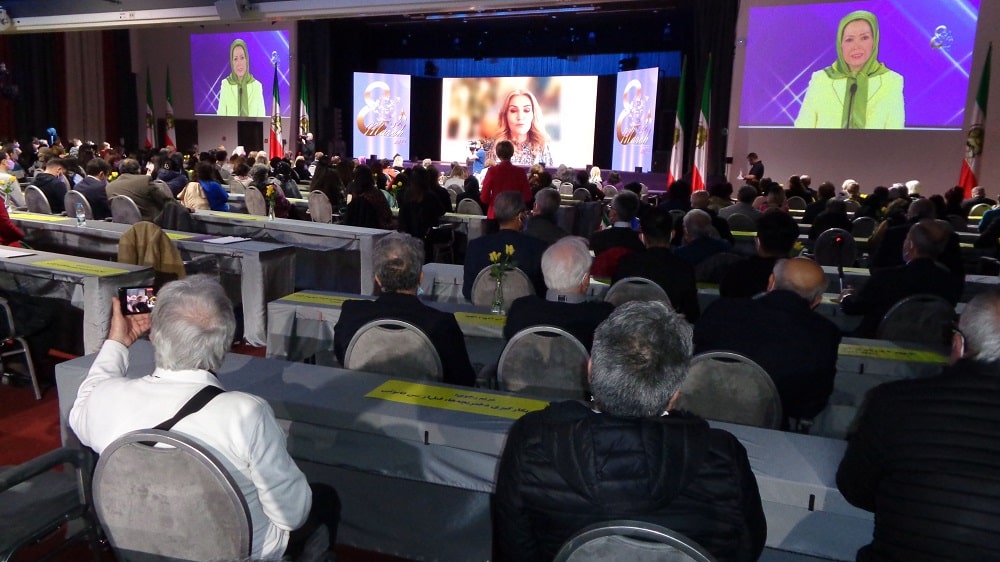 On March 5, 2022, hundreds of renowned female leaders from four continents joined the Iranian Resistance conference in Berlin on the eve of International Women’s Day.

With the landmark speech by the Iranian opposition’s leader, Mrs. Maryam Rajavi, and remarks by the brave resistance of women in Ukraine, this conference demonstrated the pivotal role of women in the struggle not only for gender parity but also for freedom.

Mrs. Rajavi praised Ukrainian women’s “epic” resistance. She also hailed the brave Iranian women and girls, who, in the forms of the “Resistance Units,” act as the trailblazers of the struggle against Iran’s misogynous regime.

Mrs. Rajavi, under whose leadership, women in the ranks of the Iranian Resistance have achieved unrivaled positions of authority and command,  shared the experience of women’s emancipation from all forms of shackles in the male-dominated world within the Iranian opposition, Mujahedin-e Khalq (PMOI/MEK).

“The PMOI women firmly stood up to the barrage of slanders. They persevered for years under military and missile attacks, stood empty-handed in front of tanks, and pushed them back. Thus, they proved their competence and capabilities on the battlefield,” Mrs. Rajavi said.

International Women’s Day is a day of pride and honor for Iranian women. Because throughout this year, as in the past four decades, they have stood against the monster of misogyny, coercion, plunder, and oppression. #IWD2022https://t.co/4TN9N1yu5Z

She also underlined the essence of equality in the Iranian Resistance. “The men and women of this movement, who are at the forefront of the Iranian people’s struggle against religious tyranny, have revived the value of resistance. They have chosen not to succumb to oppression and keep paying whatever the price necessary for eliminating it.”

The male-dominated world, particularly the backward thinking of religious fanatics in Iran, prevented women from demonstrating their leadership qualities for decades. On the contrary, a new breed of women leaders in the Iranian Resistance has been upending those old dogmas, embracing traits like empathy, courage, and collaboration to accomplish challenging tasks while refusing to suppress the qualities that make them who they are.

This fact was underlined by Urška Bačovnik Janša, a women’s rights defender and the wife of the Slovenian Prime Minister. “As a Muslim woman, Maryam (Rajavi) has had to overcome extraordinary political, social, cultural, and ideological challenges put in place by the ruling regime in Iran. I commend Maryam’s courage and commitment to empowering Iranian women. Under Maryam’s leadership, women have risen to hold key positions in the Iranian Resistance movement,” she told the audience on March 5.

.@bacovnik: Iranian women have been on the frontline of protests against Iran’s Islamic regime. They have shown enormous courage, intelligence, and strength.
#InternationalWomensDay #IWD2022 #WomenForce4Changehttps://t.co/SMhtMysbT8

For centuries, even in modern countries, women were forced to “act like men” to get ahead at work. They had to play by the rules to acquire the position of leadership. The “man’s world” causes the women’s voices to go unheard; their ideas to be overlooked, making it clear that there is no space for them at the table.

But the women in the Iranian Resistance, and now the Ukrainian women, have turned this “table,” and demonstrated their capabilities to lead the arduous struggle for freedom and equality. Thus, they have become the source of inspiration to many female leaders.

While praising Iranian women’s struggle, Rita Süssmuth, former President of the German Bundestag, said, “Don’t believe that we are too weak to show resistance. We must speak inside and outside the parliament. We are all part of one and in unity with men.”

Rita Süssmuth, former President of the German Bundestag@Maryam_Rajavi is a woman that I admire. She wants to achieve freedom and democracy.#IWD2022 #WomenForce4Changehttps://t.co/Fs9tWfVlmj

Saturday’s conference also hosted two Ukrainian MPs, who have now joined the ranks of Resistance. “My life changed ten days ago after the war came to our country and Russia invaded Ukraine. This was for a reason. Everything we do will make us stronger. Ten days ago, I was a Member of Parliament. It turned out that my life will never be the same,” Ukrainian MP Kira Rudik told the audience.

I’m so proud that women are ready to do this here in Ukraine and have joined me in my resistance team. When planning to attack Ukraine, Putin only counted the men. He miscalculated.

.@kiraincongress: I’m so proud that here in Ukraine, women are ready to do this and have joined me in my resistance team. We will overcome. We will fight for our values and for our freedom. #IWD2022 #WomenForce4Changehttps://t.co/BH7XmI0ame

“If we lose faith, we will never win. It is very important to keep the faith. To everyone who is listening, don’t give up on your country,” Ukrainian MP Lisa Yasko join Ms. Rudik in the call to action and underlining the role of women in the war in Ukraine.

.@LisaYasko: If we lose faith, we will never win. It is very important to keep faith. To everyone who is listening, don’t give up on your country. We’re fighting for all of you. If we don’t defend our freedom now, history will never be the same.#IWD2022 https://t.co/kUsAmecrbM

The conference on March 5 showcased women’s power in making meaningful change. The messages of dozens of Iranian women, members of the MEK “Resistance Units,” vowing to continue their effort to bring down the misogynous regime, along with solidarity expressed by renowned female leaders, proved the vital role of women in realizing a historic change in Iran that will affect the Middle East and beyond.

The conference and its participants helped form a lens on the world, leading to tremendous changes, a more effective leadership style. In a word, the creation of an equal world that cherishes pure humanitarian values.