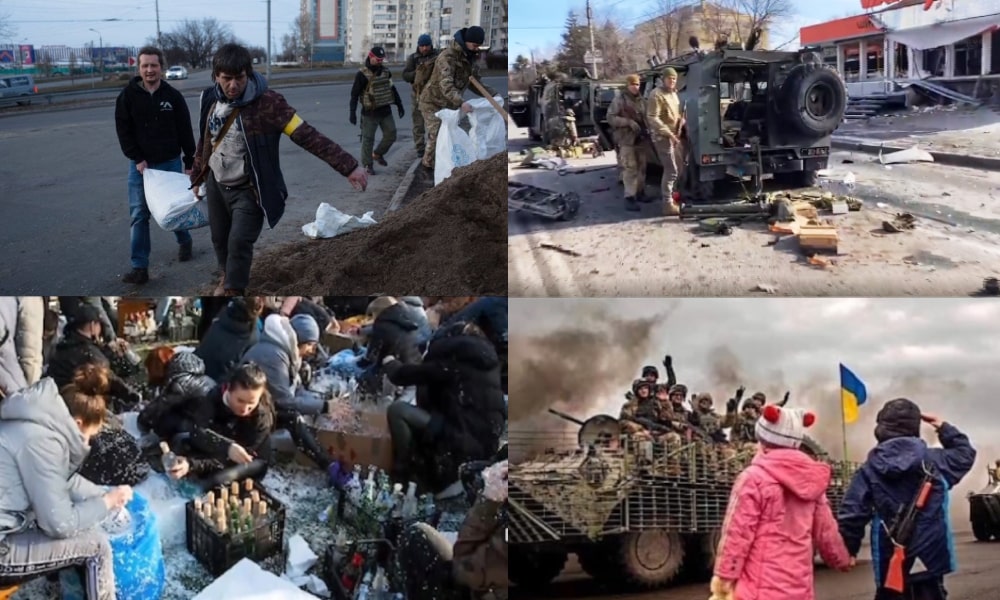 “What is our duty?” was the first question I asked myself when Russia invaded Ukraine. I could see the entire European democracy threatened by violent aggression. War and totalitarianism is on the loose.

I wondered what Ukraine’s response to this clear violation of the UN charter would be? Then came the news that the people are actually fighting back. Ukrainian President Volodymyr Zelenskyy chose not to lead from behind and flee his country in the face of Russian aggression. Instead, he called for “Resistance,” which gave me the answer to my question. I saw how the light of Resistance can once again overcome the shadow of inaction and pacifism.

On Tuesday, President Zelenskyy addressed European lawmakers. In an emotional and rousing speech, Zelenskyy said Ukrainians were literally fighting for Europe’s future. He is right.

When I was the European Parliament’s Vice President, I always tried to cherish the value of “Resistance.” At that time, my colleagues and I supported the Iranian people’s organized Resistance movement, which has been fighting against the clerical regime in Tehran. Members of this movement were under attack in Camps Ashraf and Liberty in Iraq by Tehran’s mercenaries and its puppet regime in Baghdad. The U.S. and European governments did not live up to their commitments to protect Ashrafis, but those brave men and women chose to wage resistance on their own. Much like the Ukrainian people, they confronted a much better equipped and much more violent force. The Ashrafis, in fact, had absolutely no weapons and could only defend themselves with their bare hands and industriousness. Their perseverance led to a global mobilization and finally resulted in their safe relocation to Albania, where they are passionately continuing their struggle for overthrowing the Iranian regime.

The world is watching and admiring the Ukrainian people bravely holding their ground. As President Zelenskyy said, we should honor our democratic values, for which millions of Europeans were slain during the Second World War.

Much like the Nazis in that destructive war, nearly all rogue and authoritarian states in the world are backing Russia’s invasion of Ukraine. The ruling religious fascism in Iran welcomed the war in Ukraine with open arms. The terrorist regime in Tehran is desperately trying to exploit this catastrophe.

After facing eight major nationwide uprisings in the past four years alone, and as more people in Iran choose to join the resistance against the religious fascism, and amid Tehran’s increasing international isolation, the warmongering mullahs are trying to grasp at anything to protect their crumbling rule.

Ebrahim Raisi, the Iranian regime’s mass-murdering president, and his Foreign Minister, backed Russia’s invasion, laying bare the expansionist nature of this unjust war for both Iranians and citizens of the free world.

Raisi’s remarks were not unexpected. As the “hanging judge” who sent tens of thousands of political prisoners to the gallows during the 1988 genocide in Iran, it is no surprise that he supports the bloody war in Ukraine, which has led to thousands of civilian deaths so far and hundreds of thousands of refugees.

If the premeditated and unprovoked Russian aggression has taught Europe any lesson, it is that appeasement and weakness towards bullies and tyrants produces more chaos and destruction. Europe should not give in to Tehran’s nuclear extortion and bullying. The mullahs have been breaching their commitments under the terms of the 2015 nuclear deal. Besides, the Iranian regime has expanded and increased its support of international terrorism. Europe’s democratic values are diametrically opposed to the regime’s tyrannical nature and its horrendous human rights violations.

The recent war of occupation in Ukraine is a perfect example that inaction and appeasing a warmongering state will ultimately lead to war. Historic examples abound. Following the Munich Agreement in 1939, British Prime Minister Neville Chamberlain claimed he had brought “peace for our time.” Shortly afterwards, Nazi Germany attacked Poland, and a total war descended Europe and the world into unimaginable death and destruction.

On Tuesday, European Council President Charles Michel said that the Council will not “escape” its responsibilities. Indeed, we shall not give in to the demands of dictators. The era of appeasement is over. And, most importantly, as the courageous Ukrainians are teaching us all, actions speak louder than words when it comes to protecting democratic values. It is high time that we stand for our European values of resistance and democracy and in parallel with backing Ukrainian independence, also support the Iranian people and their quest for freedom from tyranny. Such actions reinforce each other and ultimately strengthen a unified Europe.