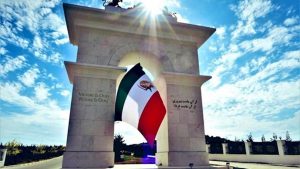 Since the relocation of members of the People’s Mojahedin Organization of Iran (PMOI / MEK) to Albania, the Iranian regime has been trying one way or another to either attack the MEK or tarnish their image through its agents. Riddled with crises, the regime has been desperately trying to annihilate its viable alternative. The regime’s embassy in Albania was tasked with implementing the regime’s malign plans against the MEK.

The Iranian regime’s terrorists once tried to bomb the MEK’s gathering in March 2018, celebrating Nowruz, the Persian new year. This event was attended by Mrs. Rajavi, and other distinguished guests such as former New York City Mayor, Rudy Giuliani. In addition, on several other occasions, the regime sent its agents and terrorist to Albania under the pretext of “Journalists” or the MEK’s “Family members.”

Simultaneous with its terrorist efforts, the Iranian regime has been launching a demonization campaign against the MEK. The ‘regime-friendly journalists’ on several occasions used their journalistic covers and the reputation of their news agency to repeat the regime’s allegations against the MEK, such as calling it a “cult” and claiming the people in the MEK camp in Albania are practicing “terrorist activities.” Most notable cases are the reports published by Germany’s well-known publications “Der Spiegel” and “Frankfurter Allgemeiner Zeitung.” Both publications were ordered by courts in Germany to remove their bogus allegations against the MEK and its members.

Yet, the Albanian officials and people have rejected all the regime’s efforts and expressed their support and solidarity with the Iranian Resistance.

The Albanian government, in response to the regime’s terrorist activities, expelled the mullahs’ ambassador Gholamhossein Mohammadnia in 2018, along with the head of the regime’s Ministry of Intelligence and Security (MOIS) Station in Albania. These two diplomat-terrorists, along with several other regime agents, were expelled and considered as “persona non grata” for “involvement in activities that harm the country’s security” and “violating their diplomatic status.”

The major setback for the regime and its agents was the “Free Iran Global Summit,” which was attended by many Albanian political and social figures from different political tendencies, who expressed their solidarity with the MEK, Ashraf 3, and the Iranian people’s struggle for a free Iran.

Remarks made by the Albanian figures during the 3-day “Free Iran Global Summit” show the Iranian regime’s absolute failure in dealing with the MEK and Ashraf 3.

“I think this summit finds your resistance as the only real hope for the liberation of your strong nation and closer to the realization of its major goal: a free Iran. I am proud to support your movement and that Albania is your second home today. I have appreciated the expulsion of the Iranian ambassador from Tirana, abut I think the complete severance of diplomatic ties with the mullahs’ regime would be the most necessary response to the terrorist acts planned against you,” said Sali Brisha, former Albanian prime minister, in a message to the “Free Iran Global Summit.”

Pandeli Majko, former Albanian Prime Minister, and current Minister of diaspora said: “You are in our faith. The Mojahedin (MEK) is a standard-bearer of the future freedom of their country. They are the unwritten rule of freedom. This is a reason why they are the flag of hope where the choices reflect their bravery.”

The Albanian opposition leader Luzlim Basha who addressed the event said: “Our position is clear. We stand firmly against the Iranian regime continuous reverting to illegal and terrorist practices on our soil and to its structured drive to export fundamentalism in Albania and our region. We support the Iranian people in their goal for a democratic, secular, and non-nuclear republic of Iran. We support the Iranian people’s desire for change and commend Madame Rajavi’s 10-point plan for the future of Iran.”

Emiriana Sako, Mayor of Durrës, the second-largest city in Albania located near Ashraf-3, said: “It is in our tradition to open our doors for people who are in danger. During the past three years, the MEK has established friendly relations with the local communities. Ashraf-3 has played a positive role in the area and provided humanitarian aid to the locals. I wish you a fast return.”

Members of Manzë Municipality, a town near the MEK camp in Albania, while expressing their support for the MEK said: “We, like many Albanians, support Ashraf-3, and we understand the lies of the mullahs. We hope the region and the world will be liberated from the mullahs. We wish for Iran and Albania to have friendly relations.”

Since their relocation to Albania, the MEK members have built a strong relationship with the locals. Following the 2019 earthquake in Albania, which damaged some towns and villages, MEK members provided humanitarian aid and donations to the disaster-stricken people. In addition, opposition leader Mrs. Maryam Rajavi personally visited residents of Manzë, where she was accompanied by Mr. Muharrem Sula, the mayor of the city. During this visit, Mr. Sula said that since the establishment of Ashraf-3, the MEK has developed sincere relations with Albanian citizens in the area.