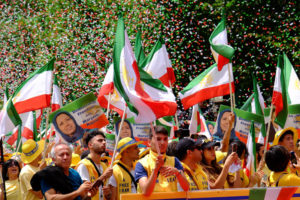 Those allegations relate both to the circumstances of the Albanian compounds founding and the treatment of its residents. The Hamburg regional court ordered that three specific passages from the article, titled “The Devil Should Be Living in Tirana,” should be removed from online versions of the story, and must not be repeated in subsequent publications. The judgment also levied a financial penalty of “up to €250,000, to be determined by the court, for each case of the offenses.” Additionally, the defendant is ordered to pay the court fees, and failure to meet the financial obligations could result in up to six months in jail.

The defined maximum amount of the fine is identical to that handed down for another news publication, Der Spiegel, in March of last year. That case, too, had been initiated by the NCRI in response to an article that conveyed similar allegations against the MEK in general, and the Albania compound in particular. The offending article, published roughly a month earlier, referred to the compounds residents in its title as “Prisoners of Their Own Rebellion.”

Both Der Spiegel and FAZ provided a platform for individuals who presented themselves as former MEK members and portrayed them as having fled their Albanian residence in the wake of mistreatment at the hands of MEK leadership. But the NCRI’s legal challenge identified the originators of these allegations as operatives for, or collaborators with, Iran’s Ministry of Intelligence and Security (MOIS).

The 2019 court case barred Der Spiegel from repeating any claims about torture having taken place at the MEK residence. It also affirmed the falsity of the article’s account of militant training that was supposedly occurring on a regular basis there. The latter claim was notably reminiscent of longstanding efforts to characterize the MEK as a terrorist group. Through these efforts, the Iranian regime enjoyed early success in having the opposition group so designated in the United States and Europe. But by 2012, all such designations had been vacated following court cases which showed no evidence of wrongdoing by the MEK.

Still, the impact of false terrorist allegations continues to linger, and it appears to influence the credulity that some international news outlets extend to those who levy allegations against the Iranian Resistance movement. This has at times led to operatives and affiliates of the MOIS, such as Massoud Khodabandeh and his wife Anne Singleton, to be cited as experts or given their own bylines in coverage of the conflict between Iran’s theocratic dictatorship and its pro-democracy activists.

Representatives for the MEK and the NCRI were evidently not heard by FAZ in advance of its May 13 article, either. Accordingly, the judge overseeing the challenge to that article ordered that the paper remove and avoid repetition of claims regarding forced severance of contact between MEK members and their families, and regarding connections between the MEK’s Albania compound and the government of Saudi Arabia. This claim, also, was reminiscent of pre-existing defamation by Iranian regime authorities, who tend to portray domestic protests under MEK leadership as being actually directed by foreign “enemies” including the Saudis, Israelis, and Americans.

The reason behind regime’s demonization campaign against the MEK

The full range of these allegations was applied to protests that began emerging all across Iran at the end of 2017. It was then that expression of economic grievances in the city of Mashhad began morphing into demands for a wholesale change of government. Over the course of January 2018, that message spread to roughly 150 cities and towns throughout Iran, marking the most substantial uprising against the clerical regime since the 2009 Movement. Though apparently smaller in absolute terms, the latter was arguably even more significant on account of their demographic diversity and their more provocative slogans, including “death to the dictator.”

The 2018 uprising was also noteworthy for its apparent contribution to a change in the Iranian regime’s strategy for dealing with the democratic Resistance movement. On one hand, regime officials followed the old pattern of blaming foreign infiltration for the unrest, with Supreme Leader Ali Khamenei specifically citing a “triangle of enemies” consisting of all three of the aforementioned rival nations. But on the other hand, January 2018 marked the first time that Khamenei publicly accused those enemies of using the MEK to plan and facilitate the actual street protests.

The supreme leader’s speech on this topic reversed a longstanding taboo on mentioning the MEK in the context of serious challenges to the regime’s power. Previously, the group had always been publicly dismissed as weakly organized, cult-like, and lacking in meaningful support among the Iranian people. This narrative evidently became difficult to sustain in the midst of the 2018 uprising, whose message of regime change reflected the MEK’s platform, while its spontaneous spread reflected a high level of organization that is only possible in the presence of a well-developed network of MEK activists.

No other group has ever credibly claimed to possess such a network, and the MEK has been widely recognized as the most organized opponent of the clerical regime since the immediate aftermath of the Iranian Revolution. This perception has been repeatedly reaffirmed by the regime itself, ever since the 2018 uprising. Although that nationwide movement was disrupted following the shooting deaths of several dozen protesters, it inspired a series of localized protests throughout 2018, which prompted the NCRI’s President-elect Maryam Rajavi to describe it as a “year full of uprisings.”

That in turn set the stage for another nationwide protest in November 2019, which once again showcased MEK leadership and explicit calls for regime change. The more recent uprising resulted in an even more violent crackdown by Iranian authorities. The Islamic Revolutionary Guard Corps quickly attacked participants with live ammunition, shooting to kill. It is estimated that after just several days, 1,500 protesters lay dead.

Such domestic repression has always constituted just one part of the regime’s dual strategy for suppressing dissent. The other part of that strategy involves disseminating false and injurious information to portray this picture that the clerical regime has no alternative and the MEK has no support at home, and abroad.

The MEK has played an important role in leading the Iranian society toward regime change, as well as exposing the regime’s nuclear activities. The activities of the MEK and its Resistance Units inside Iran during the November 2019 and January 2020 uprisings, has added to the regime’s recent bout of derangement. The MEK’s revelation of the regime’s terrorist proxy groups in the Middle East and the regime’s nuclear program in 2002 has also resulted in the regime’s international isolation.

Having no way out of crises, the Iranian regime sees no other solution than engaging in a reprehensible campaign of demonization of the MEK, which it views as an existential threat to their rule.

Engulfed with crises, the regime has stepped up its propaganda machine against the MEK. It is using its Ministry of Intelligence and Security (MOIS) to spread lies and falsehoods against the MEK through “friendly journalists.”

These “friendly journalists,” by violating all the journalistic rules and regulations, regurgitate four-decade-long lies and fake news spewed by the regime against the MEK and its leadership. The regime’s demonization campaign has two goals:

1- discrediting a viable alternative to the ruling theocracy.

2- preparing the ground for terrorist attacks.

Like the demonization campaign outside of Iran, the regime has published numerous books and articles, and produced movies inside Iran to portray the MEK as a demonic cult, which has been widely rejected by the Iranian youth. The regime uses its agents, disguised as “former members” or “critics” of the MEK. These agents are the “sources” for both the regime’s state-run media and the western “friendly journalists.”

The flip side of this coin is the forced televised confessions of prisoners, to discredit the resistance against the regime. In this regard, the Associated Press in a report published on June 25, 2020, wrote that the regime’s “state television has broadcast the suspected coerced confessions of at least 355 people over the last decade as a means to both suppress dissent and frighten activists in the Islamic Republic on behalf of security services.”

In a nutshell, terrified of the enthusiasm exhibited by young people towards the MEK and the cause of regime change by the people, the regime desperately tries to divert people’s attention by using its propaganda machine. For years the Iranian regime’s strategy has been to demonize and tarnish the image of the MEK, to claim that its rule has no alternative. In this regard, an article titled “The religion of Islam and the sinister charisma of eclecticism,” published by the state-run “Rahyaftegan” identifies the MEK as the main threat to the regime’s existence and reveals the names of some of the regime’s agents. “The office of Mr. [Mahmoud] Alavi, the honorable minister of security and intelligence, is working around the clock and has hired some of the MEK’s repentant defectors such as Soltani, Khodabandeh, Ezati, Hosseini, Karimdadi, Mesdaghi, Yaghmai, Pour-Hossain, and… By putting a lot of energy and of course, financially backing them, it uses them to psychologically confront the MEK, which is great, but is it enough?” read the article.

“No, these moves are not enough. Because the supreme leader raised an alert about the eclectic ideologies because we see how our youth, on a scale of thousands are being trapped by Rajavi’s charisma and turned from an elite student into a destructive person with the melancholy of arms and bombs,” the article reads.