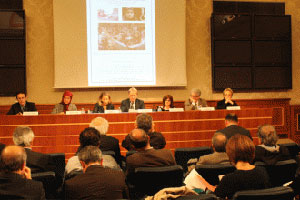 Abuses and discrimination against women in Iran has been strongly condemned at a conference of the Italian Senate in Rome.

Lawmakers highlighted the paradox that while women are subjected to inhumane treatment within the regime, a Muslim woman is leading the struggle to remove the Islamic dictatorship from power.

Senator Silvana Amato, secretary of the Senate recalled years of working with the Iranian Resistance and praised Mrs. Rajavi’s leadership in the fight against fundamentalism.

She said: “It is our duty to be vigilant that the issue of human rights and women’s rights are at the heart of all the negotiations and our country’s relations of with Iran.”

Senator Luigi Manconi, President of the Extraordinary Commission for the Protection of Human Rights, added: “We thought that they belonged to a barbarism that had become part of history, but instead we find that entirely present in our world today.”

Farideh Karimi, a member of the women’s committee of the National Council of Resistance of Iran, said that a report by the UN’s Special Rapporteur for Iran Ahmad Shaheed had shown human rights abuses had increased under so-called ‘moderate’ president Hassan Rouhani.

Senator Stefania Pezzopane, vice-chairman of the Committee on Elections and Parliamentary Immunity, insisted Iran’s abuses were not the true face of Islam, and that the world must ensure that the International Day for the Elimination of Violence against women is ‘not only a ritual’.

Antonio Stango, president of the Italian Helsinki Committee for Human Rights, said he had worked with many women of the Iranian Resistance, had met them at Camp Ashraf, and praised their stand against fundamentalism in Iran.

Senator Elizabeth Zamparutti reiterated the commitment of the Italian Parliament’s support for the struggle of the Iranian people and their resistance, and pledged to strengthen Italy’s commitment to ensuring the safety of the members of the People’s Mojahedin Organization of Iran in Camp Liberty in Iraq.