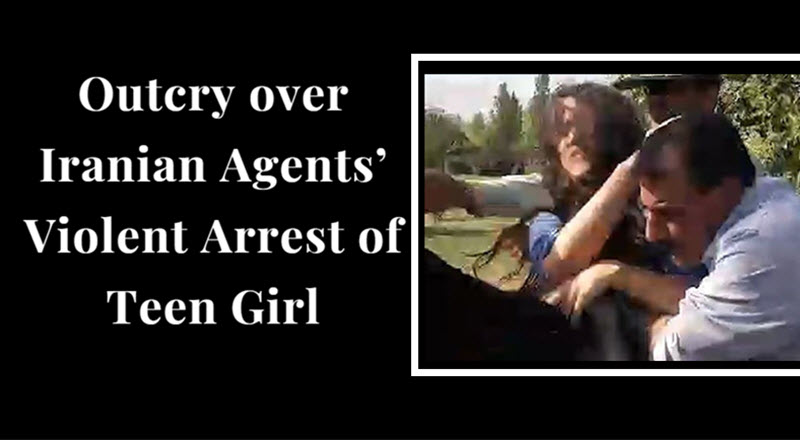 The violent arrest of a teenage girl in Tehran on Saturday, for doing nothing more than playing in the park with her friends, has caused a public outcry in Iran.

In a video clip that is being shared widely on social media platforms, a male plainclothes agent of the State Security Force grabs a young woman, said to be 15 or 16 years old, and violently pushes her into a police car. The driver and all other surrounding agents were wearing plainclothes.

In total, five young women and men were arrested by plainclothes agents in a Tehranpars park on June 22 for merely playing with water guns, according to eyewitnesses.

On Monday, June 24, Hossein Rahimi, Chief of Tehran’s Police told reporters that the five young people had been arrested and charged with “refusing to comply with the orders of the police, breaking the social norms, clashing with police agents, and also removing the veil”.

The young people are still in the custody of the police, but one might well wonder how they could be charged with refusing to comply with police orders or clashing with police agents if the agents weren’t in uniform. That doesn’t even to take into account the ridiculous charges of “removing the veil” or “breaking social norms”, which are specifically designed to repress the people of Iran.

This violent arrest had caused outrage among the people of Iran to such as extent that even a state-run news agency printed a condemnation from a social pathologist.

The pathologist said: “This type of behaviour, is neither punitive nor humanitarian or Islamic. We have laws. The law does not allow anyone to act in any way they want. At the same time, we have policewomen. In such cases, where women are involved, policewomen have to take action and speak.”

The public outcry even caused the commander of the State Security Force of Tehran to order the dismissal and detention of the two police agents directly involved in the arrest, just a few hours after the news broke. However, he walked back this order on Tuesday, June 25, claiming that he was postponing it until the “conclusion of investigations”, which sounds like code for “until this all dies down”.

In a related matter, another video circulating on social media shows a sobbing young woman who was beaten up by State Security Force agents in a Tehran metro station for improper veiling.

Reportedly, the regime is seeking to station patrols in recreational areas in the coming days to monitor women’s compliance with the forced veil and give verbal warnings, but it seems clear that these may well turn into physical warnings.