Syrian Women Inside Stadium, Iranian Women Behind Freedom Gate! And the Aftermath 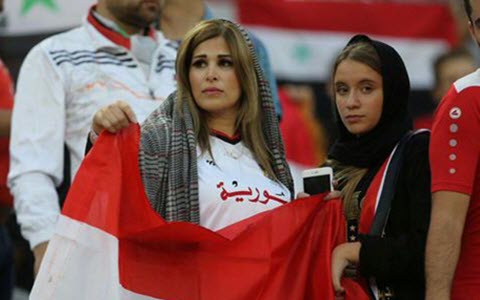 NCRI – While the Iranian regime’s reactionary, misogynous policies during a 2018 FIFA world cup Russia qualifier held on September 5, 2017 between Iran and Syria prompted overwhelmed people to react in protest, they also revealed more than ever the benighted nature of this medieval regime and its true face to the world.

In Iran under the rule of mullahs, women and girls are not allowed to get in stadiums to watch sports competitions, including football matches. This is while Syrian women and girls, no matter if they were wearing hijab or not, were free to attend a September-5 football match in Azadi Stadium, to watch the game and cheer for their favorite team.

Even compared to Korean or Japanese women who had previously attended the stadium, Syrian women were more freely dressed, so much so that their released images highlighted more than ever the discrimination between Iranian and non-Iranian women in their right to attend the stadiums.

“The paradox of Syrian women’s hijab”, wrote a state-run newspaper in this regard, adding “Iranian women were shocked watching their Syrian counterparts being allowed into the stadium despite the fact that Iranians were dressed much more properly than the Syrians, who were so-called ‘loosely dressed’.” (State-run Aftab-e-Yazd newspaper, September 6, 2017)

The issue soon turned into the subject of conflict between regime’s rival bands, with a newspaper close to Hassan Rouhani releasing a photo of the event, writing “Syrian women inside stadium, Iranian women behind Freedom!”, implying that Syrian women were allowed to get in Azadi (freedom) Stadium while Iranian women were not. (State-run Etemad newspaper, September 6, 2017)

Also state-run Aftabnews website has quoted ISNA news agency as saying “the more catastrophic part of the story is that according to a number of Iranian women standing outside the stadium, they were apparently told that they could get in the stadium by holding the Syrian flags in hand! If that’s true, then the question that arises here is whether an Iranian (woman) needs to hold another country’s flag so as to be allowed to enter a place.” (State-run Aftabnews newspaper, September 6, 2017)

Meanwhile, regime’s Ministry of Sports and Youth Affairs resorted under pressure to a ridiculous move, sending two women, both regime officials, to the stadium. “Ministry of Sports and Youth Affairs, however, selectively invited a number of women officials, making it possible for some Iranian female directors to attend Azadi stadium” writes state-run ISNA news agency on September 6, 2017, adding “Leila Soufizadeh, vice chairman of Women Football, and Tayebeh Siavoshi, MP, could watch Iran-Syria football match from inside the stadium.”

On the other hand, a number of Iranian female sports fans announced in social media networks that they’d been able to purchase the football match tickets. Shortly afterwards, however, regime’s Football Federation denied the possibility of Iranian women watching football matches from inside the stadiums.

The option to select gender was first available on the website selling tickets online, so women could buy tickets while selecting ‘female’ as their gender, following which they expressed their happiness since they’d succeeded to buy a football match ticket for the first time. Less than an hour afterwards, however, regime’s Football Federation’s head of security announced that nothing has changed in this regard and that women will continue to be disallowed to enter stadiums for watching football matches.

“I emphasize that ticket selling regulations are the same as before and that no changes has been made in the process. So, all such rumors saying otherwise are unrealistic”, said head of security of regime’s Football Federation in an interview with state-run ISNA news agency.

Regime’s sports officials had ordered the company responsible for selling online tickets to remove the gender option from their website. The company, Borhan Mobin, then announced in a statement that the tickets had been sold to women due to technical mistakes.

A state-run newspaper wrote in this regard “the first contradiction was to create restrictions for Iranian women despite their obtaining ticket. This is a point to ponder on, the fact that foreign women are allowed but Iranian women are not! Syrian women were happily and cheerfully entering the stadium while Iranian women were regretfully watching them, having to make do with their torn tickets and some futile protests in social media. (Aftab-e-Yazd, September 6, 2017)

The interesting point is that the ticket selling company claimed that only eight women had bought tickets. In reaction to that, women tweeted their names, maintaining they were more than eight.

Previous articleIran Regime’s Concern Over the Inspection of Military Sites
Next articleIran: Load-Porters, Part of the Army of Unemployed