Iran: Load-Porters, Part of the Army of Unemployed 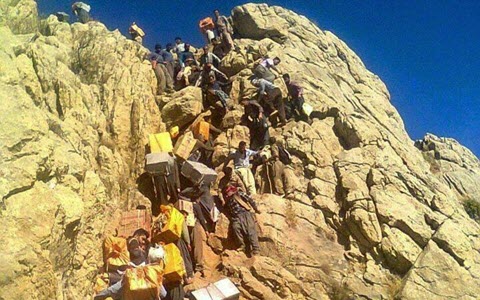 NCRI – Porterage is one of the most common jobs in the border areas, especially in western Iran. Choosing porterage as a job by people in these areas is only due to poverty and poor economic conditions.

Recently, killing of two porters was so criminal that state-owned media were forced to criticize, in the form of Crocodile-tears, the approach of the Revolutionary Guards and the police towards this issue.

The state-run Sharq newspaper affiliated to Rouhani, admitted on 6 September 2017, the fact that porterage itself is “a sign of chronic economic disease of the country,” and that the aspect of this illness among the people living in the borderline is extreme poverty and unemployment, and porterage is also a caused of this situation.

The state-run Jahan-e San’at (World of Industry) also writes in a confession on 6 September 2017, “While the large and organized gangs of smuggling are parading in the country, and these gangs carry around millions of tons of goods easily every day, nobody throws them out. And also whenever the government speaks of the fight against smuggling, it prevents the load-carriers from earning a living.”

The newspaper describes the porterage as a phenomenon created due to unemployment of various strata of the population, especially the people of the border regions: “Porterage is one of the hard and difficult jobs that, for many years, has dragged even children because of lack of work in the border regions. So that the daily needs of people in that region is provided in this way.”

“A porter is not a smuggler, and only because of the lack of industry and proper work, as well as for livelihoods in order to earn a living, he is forced to carry goods at his back and relocate the products in the impassable border areas.”

The fact is that the deplorable livelihood and hard working conditions of load-carriers, is the other side of the coin of astronomical plundering and institutionalized smuggling and rent-seeking and bribery by the regime’s leaders and government agencies, such as the Revolutionary Guards and the Police force.

The Iranian regime is targeting the deprived and impoverished porters, rather than stopping the organized smuggling gangs involved in smuggling billions of dollars of goods every year.

According to the confessions of the Iranian regime officials and the media, a figure of between 15 and 40 billion dollars smuggling goods enter and leave the country every year. This volume of goods is smuggled in a situation where the volume of foreign trade in the country in 2015 was about 84 billion dollars.

It is clear that this large volume of smuggling goods and the uncontrolled entry of goods into the country, through the organized smuggling by regime officials and government institutions such as the Revolutionary Guards, results in closure of many thousands of Iran’s productive workshops and causing unemployment of a large number of workers and millions of Iranians seeking work.

The hardworking load-carriers are part of the millions of unemployed people who according to the state-run media form the army of unemployed.

Previous articleSyrian Women Inside Stadium, Iranian Women Behind Freedom Gate! And the Aftermath
Next articleIran’s Psychiatrists Association: One out of Every Four Iranians Has a Mental Disorder