Women in Iran banned from wearing hats as head covers 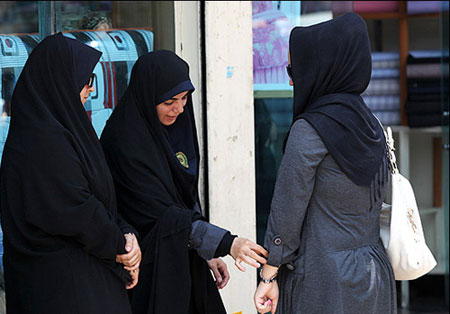 NCRI – Women in Iran have been banned from wearing hats as head covers this winter, according to the regulation announced by ‘moral police’.

Chief of the moral police Colonel Mohammad Massoud Zahedian described the wearing of hats as an example of ‘improper dress’, adding: “It will certainly will not be considered as a complete veil for the women.”

He said that being ‘covered up for women was not necessarily acceptable to the police’.

He added in remarks published on the official police website: “Covering up by wearing clothing could even constitute a show off that targets public chastity.”

Since the repressive ‘boosting public security plan’ was first imposed in 2007, the regime has issued warnings about clothing and arrested thousands of women every year.

In late October, cities across Iran witnessed a series of massive public protests against the targeting of women and young girls by state-sponsored gangs following calls by the ruling mullahs to act against ‘improper dress.’

In November, several young Iranian women, including at least five university students, were stabbed in the southern city of Jahrom.

The attacker said he had been motivated to attack after one cleric said that ‘killing a Bad-Hejab (improperly veiled women) was permissible’ and he acted to ‘prevent vice’.

The latest restrictive measures on hats coincide with the regime’s parliament approving legislation empowering the para-military Basij force with officially enforcing the restrictions under the ‘Promotion of Virtue and the Prevention of Vice’ laws.

In the 35 years of its rule, the misogynistic regime has done nothing for Iranian women except institutionalize violence, discrimination and ceaseless suppression against them.

The heinous knife and acid attacks on women and restive measures, are but the reaction of the clerical regime to the growing hatred of Iranian people for this regime, especially the growing women’s movement, in order to confront the rising protests and the explosive state of society.