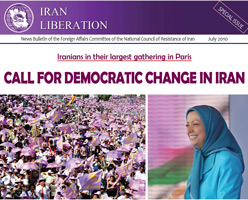 Previous article
At Last, Serious EU Sanctions Against Iran
Next article
Call to save the lives of two political prisoners on hunger strike

Free Iran World Summit July 10-12, 2021: The Democratic Alternative on the March to Victory

For A Free Iran: The Three Key Pledges Of The Iranian Resistance-Free Iran Gathering 2020