Thousands demonstrate against Ahmadinejad in New York
Thousands of Iranian-Americans rallied in New York on September 23 to protest the presence of the ‎Iranian regime’s President at the UN. Messages:‎

Mryam Rajavi: We must at the outset tell the mullahs that by sending Khamenei’s loathed puppet to ‎the UN, you cannot 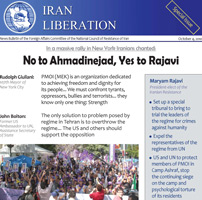 put a lid on the demands of the Iranian people for the overthrow of the ruling ‎theocracy.‎

Rudolph Giuliani, 107th Mayor of New York:  It is time for the rest of our Congress to join 83 members ‎who have supported House Resolution 1431 which calls for the lifting of the unjust, unfair and ‎inaccurate terror designation. It should be lifted by the US Congress and President Obama should ‎support it.‎

John Bolton, former US Ambassador to the United Nations: … The evidence is overwhelming that ‎during the Clinton administration the MEK [People’s Mojahedin Organization of Iran] was put on the ‎terrorist list because it was thought to be a way to open dialogue between the United States and ‎Iran. That is an illegitimate basis to make a decision about any organization;  …‎

Prof. Raymond Tanter Chairman of Iran Policy Committee, former member of the US National Security ‎Council: A core of the Iranian opposition is in Camp Ashraf. Tehran infiltrates intelligence agents who ‎stand at the gates and encourage Baghdad to withhold medical supplies from the Ashraf residents. ‎This will not stand…‎

Free Iran World Summit July 10-12, 2021: The Democratic Alternative on the March to Victory

For A Free Iran: The Three Key Pledges Of The Iranian Resistance-Free Iran Gathering 2020