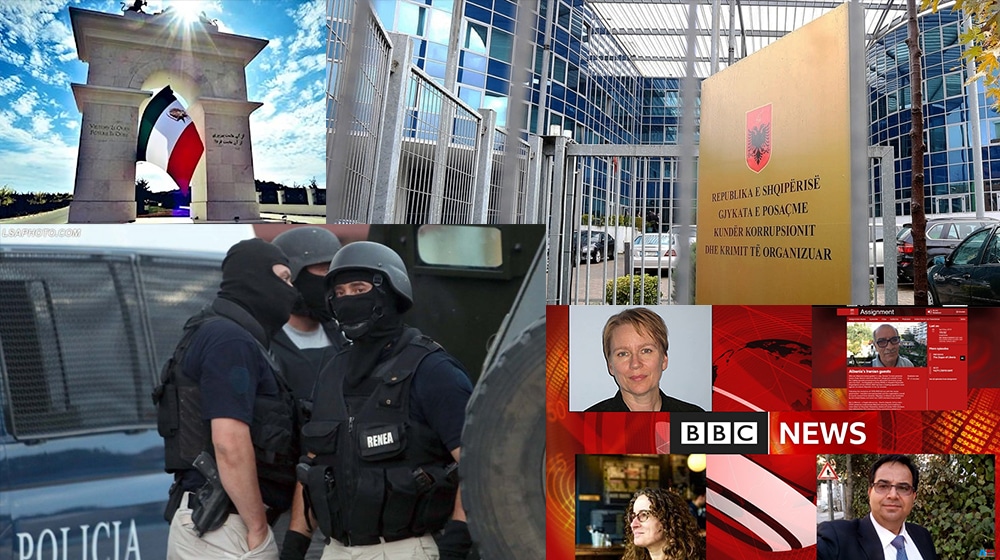 On July 16, 2022, the Albanian media reported that the country’s Special Structure for Combatting Corruption and Organized Crime (SPAK) acting on the request of the Special Prosecutor’s Office, detained and interrogated 20 Iranians for espionage in the service of the Iranian regime. Albanian Police raided eight apartments, four offices, and several buildings where they stayed and conducted prohibited activities. The premises of the ASILA Association was also searched.

According to the Albanian Police, these individuals had been under investigation for four years. They are suspected of carrying out espionage activities on Albanian territory on behalf of the Islamic Revolutionary Guards Corps (IRGC), an entity designated by the United States as a Foreign Terrorist Organization (FTO), and the Ministry of Intelligence and Security (MOIS), according to EuroNews Albania.

According to the court order, as reported by Albanian media, these activities were carried out to prevent “any possible terrorist attack.” The order further stipulated that these persons are accused of “receiving money from Iran’s secret services, the Qods Force, and the IRGC to obtain information about the MEK in Albania.”

The Balkan Web wrote on July 16, that the Special Structure for Combating Corruption and Organized Crime (SPAK) had been conducting investigations for four years about a cell that intended to attack the People’s Mujahedin in Albania. SPAK raided a terrorist cell in 2019. News 24 has disclosed the complete investigation file, which showed that the terrorist cell had planned to target Mehdi Abrishamchi, a senior official of the MEK in Albania. The members of this cell were also monitoring other members of the People’s Mujahedin in Albania. The arrests and investigations of the espionage and terrorist cell were in connection with the arrest of another mercenary of the regime named Bijan Pooladrag two years ago.

“The individuals in question are suspected of being members of a spy group, where Bijan Pooladrag, a former member of the MEK, was previously arrested… He is accused by SPAK of being part of a terrorist cell that intended to attack senior officials of the Iranian opposition, who live in Ashraf 3. He received orders and instructions through the Telegram application. And according to the investigations, the assassination of one of the senior members of the Mujahedin Khalq was being planned.  One of Iran’s intelligence officers had ordered the defendant to procure a Kalashnikov machinegun in the black market and find trained people who could commit murder,” News24 added.

On February 17, 2021, another Iranian national, Hadi Sani Khani, who had left the ranks of the MEK in 2016, wrote a letter to the Secretary General of the United Nations, Antonio Guterres, revealing that for four years he had collaborated with the same individuals, especially Hassan Heyrani, who had acted as the ringleader and liaison between these individuals and the Iranian embassy in Tirana. “During this period, I began to collaborate with official agents of the MOIS in the Embassy in Albania…. and MOIS agents, including Ebrahim and Massoud Khodabandeh, Gholamreza Shekari and Ehsan Bidi, and later Hassan Heyrani. They used me in demonization, espionage, intelligence gathering, and reconnoitering schemes to carry out terrorist actions against the MEK,” Sani Khani wrote.

Although Albanian media are now reporting on the espionage and organized terrorist activities planned by this ring of ex-MEK employed by Iranian secret services inside Albania, this ring’s outreach to western news outlets in the mainstream media is another more elaborate aspect that requires scrutiny and investigation.

The anti-MEK ring run out of Tehran and residing in Albania was able to dupe or manipulate a dozen journalists from such news media as The Guardian, Foreign Policy, The Independent, Der Spiegel, MSNBC, and even the BBC and the New York Times, as well as others, to publish derogatory and outlandish accusations against the MEK, which is the main opposition movement seeking to overthrow the regime in Tehran, and which the Iranian regime seeks to discredit and demonize internationally to blunt the spotlight the MEK has put on its human rights violations, its secret nuclear weapons programs, its terrorist-sponsoring activities, and its meddling in the Middle East region to foment war and conflict.

These operatives told eager and willing “friendly journalists” lies and false stories about the MEK and its leadership and aim, to sow distrust and confusion in the minds of the Western public and to make it difficult for Western policymakers and public figures to support the movement against the Iranian regime.

For example, the New York Times, the Guardian, Der Spiegel, BBC-4, and several other mainstream media outlets wrote scathing tabloid-grade stories against the MEK, that began to appear after September 2018, based on accounts by these Iranian secret service operatives, and in particular, Hassan Heyrani. Heyrani had been expelled from the organization only a few months before this media blitz by the Iranian MOIS by way of its operatives and friendly journalists and producers in the Western media.

On February 17, 2020, Patrick Kingsley of the New York Times, despite visiting Ashraf for nine hours and speaking privately with several residents, published a highly derogatory article entitled, “Highly Secretive Iranian Rebels Are Holed Up in Albania.” Kingsley based his reporting on interviews with the ring of “MEK defectors, including Heyrani and Mohammadian,” who are now under investigation for espionage on behalf of the regime, to cast aspersions on MEK members by saying that “Inside the group… contact with family is highly restricted, and friendships discouraged,” and “members have to confess to their commanders any disloyal thoughts they had.”

By highlighting alleged behavior that the public associates with anti-social cults, the Iranian secret service’s ring of agents was feeding Kingsley and other receptive journalists material for scandalous gossip pieces that would damage the reputation and integrity of a long-established progressive political movement against the regime. An image that was the polar opposite of what many public figures who had contact with the movement’s members and leadership had formed through direct experience.

A BBC article dated November 11, 2019, also gives voice to the Iranian regime’s propaganda, calling the MEK a cult. It writes: “The movement’s manifesto includes a commitment to human rights, gender equality, and participatory democracy for Iran. But Hassan Heyrani does not buy it anymore. Last year he left the MEK, rejecting what he saw as the leadership’s oppressive control of his private life.”

In another piece on July 15, 2019, by an Iranian journalist, The Guardian quoted Heyrani that “he (Heyrani) worked in a ‘troll farm’ of 1,000 people inside the Albanian camp, posting pro-Rajavi and anti-Iran propaganda in English, Farsi, and Arabic on Facebook, Twitter, Telegram and newspaper comment sections.” The article went on to claim there were “extraordinary psychological violence and threats of murder” inside the compound, and even quoted “former members” accusing the MEK of the “death of one of their members,” all unsubstantiated allegations based on reporting from this Iranian secret service ring of operatives.

In an article on June 9, 2019, The Intercept, falsely describing Heyrani as a “high ranking defector,” quoted him as saying that due to “the MEK’s cult-like operating principles, the leader of the organization doesn’t allow any person to use their real name because the leader is the first man in the organization, and everything should be under their shadow.”

In a piece on April 27, 2019, Sohail Jannessari and Darren Loucaides wrote, “(Heyrani) who defected in 2018 told Foreign Policy about group rituals and routines designed to completely subjugate the individual self, while forcing near-religious worship of MEK leader. Women were made to adhere to a strict dress code. Members were obliged to record the details of their daily activities and thoughts in personal notebooks and then share them in group meetings, with the risk of public shaming and punishments.”

The Independent wrote on January 7, 2019, “Heyrani, the 38-year-old former member of the MEK’s political section, says he suspected the group’s sudden riches were coming from Saudi Arabia’s coffers.”

Reality starting to be established

After visiting Ashraf-3, on August 22, 2021, a Sunday Times correspondent met with Hassan Heyrani at a café he now operates as a gathering point for his ring in Tirana. The Times quoted Heyrani as saying that “the camp is a prison,” among other allegations. Nevertheless, Heyarni admitted to the Times that the café and Heyrani’s association had been financed by an “NGO” in Iran that had obvious links to the MOIS and was a front organization for Iranian regime activities against the MEK. This café is also the address given for ASILA Association, the very association that was subject to a search warrant by the Albanian Police.

The Iranian Resistance had denounced these agents previously and maintained that they were not only involved in terrorist plots but in a well-funded propaganda campaign to vilify the MEK as the main whistleblower on the regime’s nuclear weapons program, human rights violations in Iran, and its malign activities abroad, and the major engine for its overthrow in Iran. Now, with the recent official revelations in Albania about police investigations of these agents, it should be abundantly clear that they fed the mainstream media mentioned above and others, with lies and propaganda to denigrate Tehran’s main opposition in service of the Iranian regime. It should be of concern to all reputable media and news editors how the Iranian regime is using biases against the MEK developed over a span of more than two decades to gain coverage for its disinformation campaign against its opponents.

It is high time that the mainstream media recognize the media scam run by the Iranian regime with slush funds, friendly journalists and producers, and a ring of willing “defectors” that serve as “sources” to further its soft power goals in the West.

Previous article
Iran News in Brief – August 1, 2022
Next article
Iran: Resistance Units’ Activities in 27 Cities on the Anniversary of the 1988 Massacre of 30,000 Political Prisoners