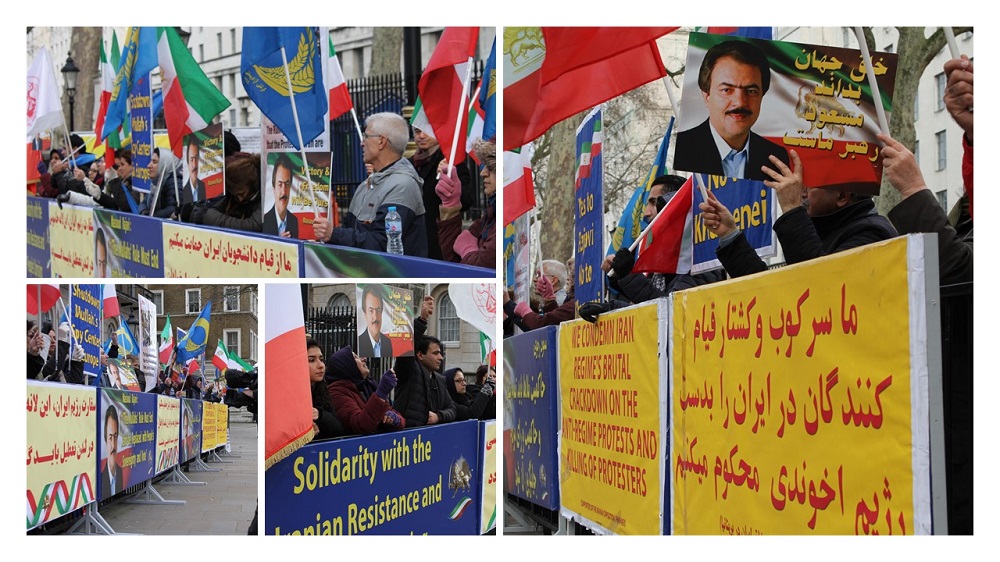 Written by Mansoureh Galestan on 14 January 2020.

Members of the Anglo Iranian communities and supporters of the People’s Mojahedin Organization of Iran (PMOI, Mujahedin-e Khalq or MEK) and the National Council of Resistance of Iran (NCRI) on Monday staged a protest outside Downing Street in London in solidarity with the nationwide Iran protests.

MEK and NCRI supporters gathered outside Number 10 Downing Street on Monday, January 13, in support of the popular protests against the regime and the Revolutionary Guards (IRGC) following IRGC’s admission this weekend that it had shot down the Ukrainian passenger plane. The participants urged the UK Government and Prime Minister to recognize and support the democratic aspirations of the Iranian people for democratic change in Iran.

Protesters also expressed their support for the call by Mrs. Maryam Rajavi, NCRI’s president-elect, on the international community to acknowledge the reality that the religious fascism ruling Iran does not represent the Iranian people and recognize the Iranian people’s right to overthrow this regime.

MEK and NCRI supporters also paid tribute to the victims of the airplane crash and over 1500 martyrs of the nationwide Iran protests in November.

Mr. Hossein Abedini, a member of the NCRI’s Foreign Affairs Committee, told the gathering: The protest by thousands of Iranians in Tehran and a number of other cities last night and today, in which people were chanting slogans like ‘Commander-in-Chief of the Armed Forces, resign, resign,’ makes it palpably clear that the Iranian people demand the mullahs’ overthrow.”

“The protests undercut the regime’s propaganda subsequent to the termination of Qassem Soleimani. Not only the protesters tore down his posters in Tehran and elsewhere, but they also chanted ‘Soleimani is a murderer, so is his leader (Ali Khamenei).’ They condemned the shooting down of the Ukrainian airliner and lashed out at the regime for lying about it,” he added.

“In the aftermath of the November anti-regime protests in 191 cities throughout Iran in which the regime killed more than 1,500 protesters, wounded 4,000 and arrested 12,000, the tide has turned against the regime,” Mr. Abedini concluded.

Protesters in London held signs which read: “Yes to Rajavi, No to Khamenei,” and “We condemn Iran regime’s brutal crackdown on the anti-regime protests and killing of protesters.”

Previous articleEDITORIAL: Message of Second Wave of Iran Protests: The Mullahs’ Regime Is Destined to Fall
Next articleLive – Iran Protests; Continue for Forth Consecutive Day