Bob Blackman MP: Iranians Are Not Rallying Behind the Regime 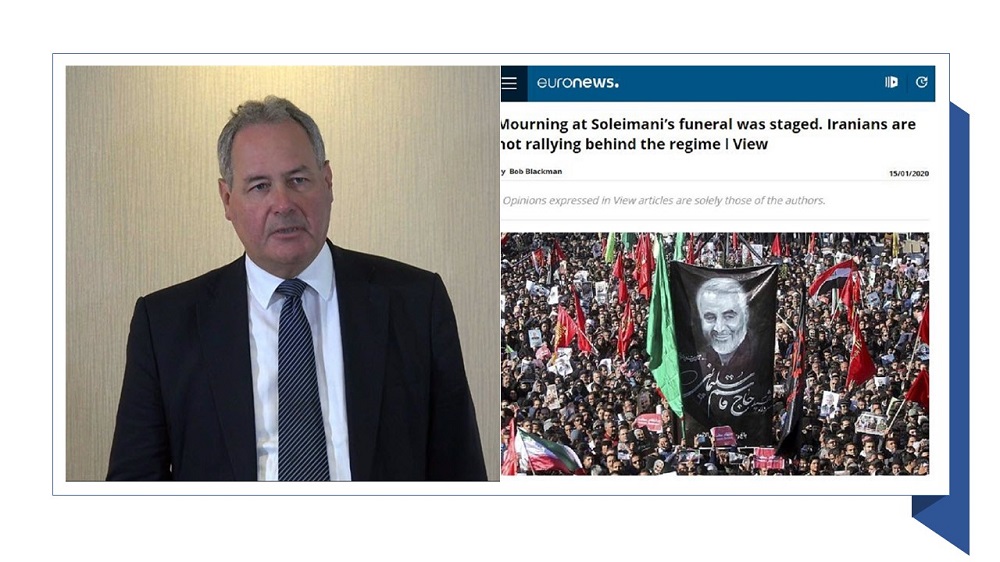 Bob Blackman MP on the Euronews website: Iranians Are Not Rallying Behind the Regime

In an article published on the Euronews website on Wednesday, Bob Blackman, a Member of Parliament from the United Kingdom’s Conservative Party, explained the Iranian regime’s failure in portraying the eliminated chief of the Revolutionary Guards (IRGC) Quds Force, Qassem Soleimani, as a national hero.

In his article, Mr. Blackman referred to the regime’s failed carnival of Soleimani’s funeral and how it had mobilized all its forces from across the country to demonstrate its power.

“But, if you logged into Twitter while the funeral was ongoing, you might have encountered a much different narrative about the Quds Force commander and the impact of his death. There, hundreds of thousands of people tweeted using the hashtag #IraniansDetestSoleimani. Many posts included descriptions of the carnage that he has wrought, both in his home country and in the broader region. And in a repeat of the outpouring of eyewitness testimony regarding recent anti-government protests, many of the verbal accounts were backed up by images,” he added.

“Despite anything you might have seen on television this week, ordinary Iranians are not mourning for Soleimani. To the extent that they were present on the streets of Tehran during his funeral, it was largely because the regime is masterful at managing public demonstrations and shaping a propaganda narrative around them,” said Mr. Blackman.

“These feigned counter-protests were seen, of course, in the midst of the uprising that began on 15 November. The first week of that uprising was virtually a blind spot in international reporting since the government and authorities in Iran had cut off all access to the internet in order to halt the spread of objective information. But once connectivity was restored, State media rushed to portray counter-protesters as overcoming the voices of ‘rioters’ and ‘thugs’,” he added.

Referring to the IRGC’s role in brutally oppressing both the nationwide Iran protests and the Iraqi people’s uprising, Mr. Blackman wrote: “Just in the last two months, more than 1,500 Iranians have been killed at the hands of the suppressive state security forces, principally the Islamic Revolutionary Guard Corps (IRGC). The tactics on display in those killings were notably similar to those utilized against Iraqi protesters from mid-October onwards. It was at that time that Soleimani was dispatched to Baghdad to assist in putting down demonstrations that had begun to plainly target Iran’s influence over the Iraqi government.”

“The truth comes through unvarnished from exiled Iranians and members of pro-democracy opposition groups, like the People’s Mojahedin Organization of Iran (PMOI-MEK) and the broader opposition coalition, the National Council of Resistance of Iran (NCRI). These people will gladly tell the world about the crimes of Qassem Soleimani and how they have harmed both Iran and the Middle East as a whole,” wrote Mr. Blackman, referring to Soleimani’s role in suppressing dissidents such as members of the People’s Mojahedin Organization of Iran (PMOI, Mujahedin-e Khalq or MEK) in Iraq.

While referring to the recent protests in Iran, triggered after the regime downed a passenger airliner last week, killing 176 passengers, Mr. Blackman wrote: “The anti-regime protests in Iran last weekend reflect the genuine attitudes of the Iranian people. These protests are a continuation of those beginning in November and proceeding through December, reforming again and again in the face of harsh repression and 1,500 deaths. Iranians may not be willing to risk their lives in order to sit out a state-mandated memorial service, but they will do so in order to gather another day and repudiate what this dead terrorist stood for.”

Bob Blackman is the Conservative Member of Parliament for Harrow East and a member of the British Committee for Iran Freedom.