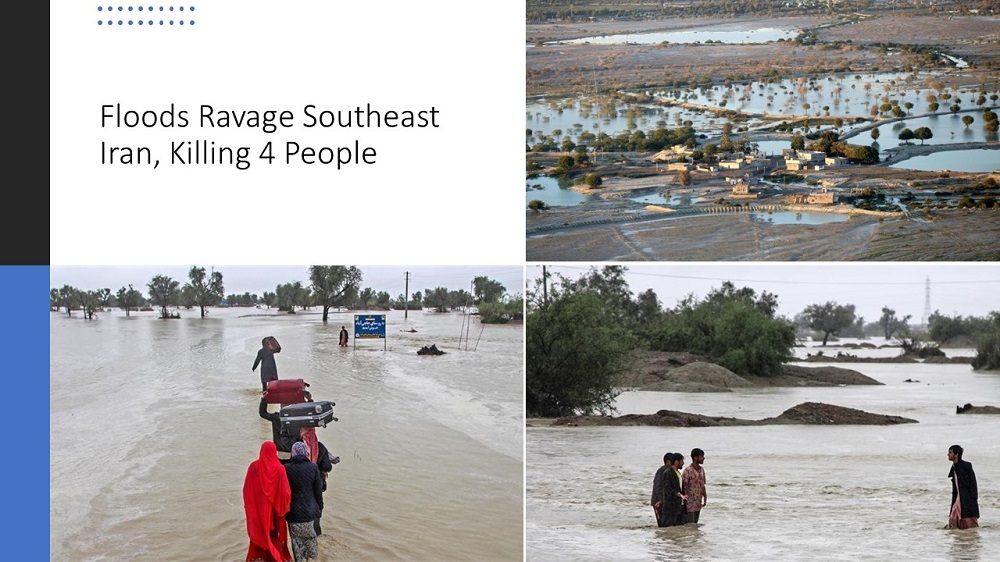 Unprecedented floods in Sistan Baluchestan, Hormozgan and Kerman provinces, south and southeast Iran have ravages cities and villages in some of the most impoverished regions of Iran.

Unprecedented floods in Sistan Baluchestan, Hormozgan and Kerman provinces, south and southeast Iran have ravages cities and villages in some of the most impoverished regions of Iran. Reports indicate at least four people have died in the floods and thousands have been displaced.

The floods have affected 500 villages and 14 towns in the province alone and 20,000 houses have been damaged or destroyed.

In Nikshahr, 200 villages have lost internet and telephone communications and there’s no news of their conditions. Many villages in Sistan-Baluchistan province have been completely submerged in water.

The displaced people are in critical condition and are in dire need of help. Pictures and videos circulated on social media show villagers climbed up into the trees to escape the rising floodwaters. Many are living on the rooftops of standing buildings. Footages also show that waterflood has pushed alligators into villages. In addition, in Bandar Abbas, floodwater has covered all the streets and many of the homes. Five days after the floods, locals continue to suffer in traumatic conditions and are in dire need of help. So far, the regime’s authorities have taken no action.

Speaking to the state-run TV, a flood victim said, “You come and take your pretty reports but censor what’s really happening”. He says the regime has not provided tangible aid after severe floods ravaged the province.

Mrs. Maryam Rajavi, the president-elect of the National Council of Resistance of Iran (NCRI) offered her condolences to the flood-stricken people who said, “I ask patriotic youth in the south to assist our flood-stricken compatriots in Hormuzgan, Sistan & Baluchestan, & Kerman. Tens of thousands are besieged by flood or have lost their homes. Basic equipment to get aid to those areas is lacking in Iran.”

The Iranian regime has plundered the wealth and assets of the people for its repressive, destructive and terrorist projects. Yet the regime’s authorities shamelessly are complaining that the flood-stricken provinces don’t have front loaders, bulldozers and other equipment to restore the pathways.

Underlining the regime’s anti-popular policies that have devastated Iran, Mrs. Rajavi said, “By destroying the environment, the mullahs have worsened the floods, doing nothing to help the victims. They squandered the nation’s wealth to pursue nuclear & missile projects & warmongering, leaving our compatriots defenseless in the face of natural disasters in Iran.”

Previous article
Iran Protests: People of Sanandaj Stage Demonstration, Chanting, “Khamenei Is a Murderer,” “Death to the Oppressor, Be It the Shah or the Leader.”
Next article
U.S. Senators Recognize The Iranian Protests And Detest Regime’s Brutal Retaliation