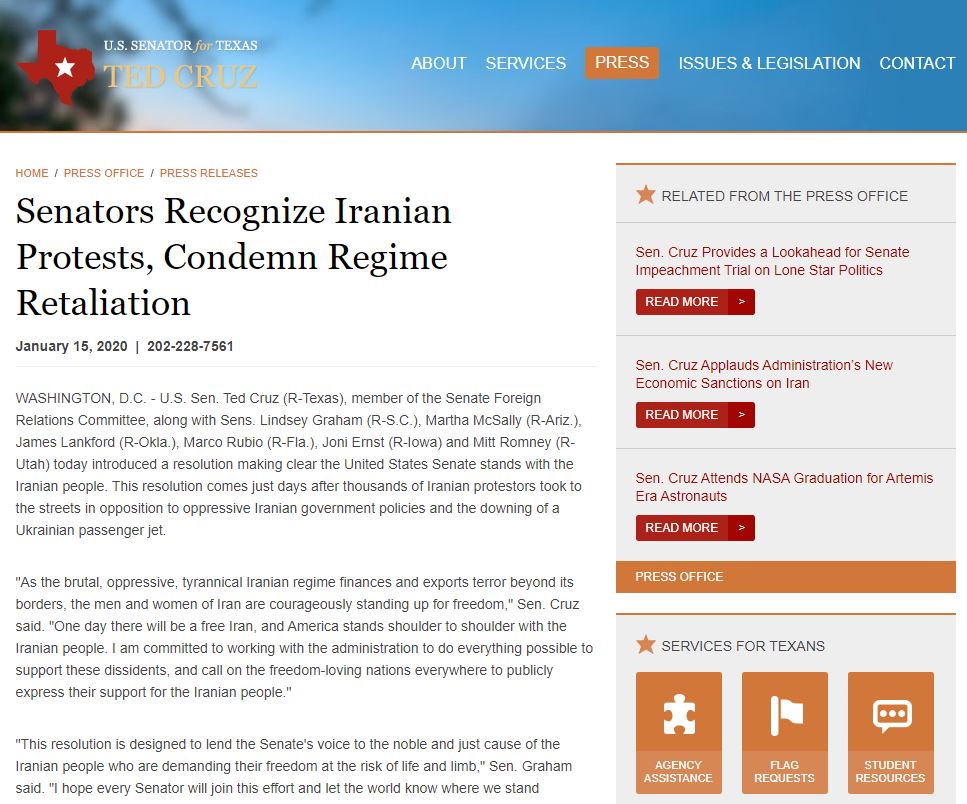 Written by Mahmoud Hakamian on 16 January 2020.

A press release, issued by Senator Cruz’s press offices, on Thursday, January 15, says: “As the brutal, oppressive, tyrannical Iranian regime finances and exports terror beyond its borders, the men and women of Iran are courageously standing up for freedom,” Sen. Cruz said. “One day there will be a free Iran, and America stands shoulder to shoulder with the Iranian people. I am committed to working with the administration to do everything possible to support these dissidents, and call on the freedom-loving nations everywhere to publicly express their support for the Iranian people.”

The U.S. Senator, Lindsey Graham said: “This resolution is designed to lend the Senate’s voice to the noble and just cause of the Iranian people who are demanding their freedom at the risk of life and limb,” the press release added. “I hope every Senator will join this effort and let the world know where we stand regarding the Iranian people’s desire to be free from the murderous regime of the Ayatollah.”

The resolution introduced to the United States Senate states:

• stands with the people of Iran as they protest their corrupt and oppressive government,

• condemns the lethal crackdown by the Iranian regime on the peaceful protestors,

• calls on all peaceful and law abiding nations to support the legitimate protests by the Iranian people, and

• demands that the Iranian leadership be held accountable for their murderous actions against their own citizens who want nothing less than to be represented by a fair and just government.