Col. Thomas Cantwell: Iran’s Top General Was an Obstacle to Both US Interests and Iranian Democracy 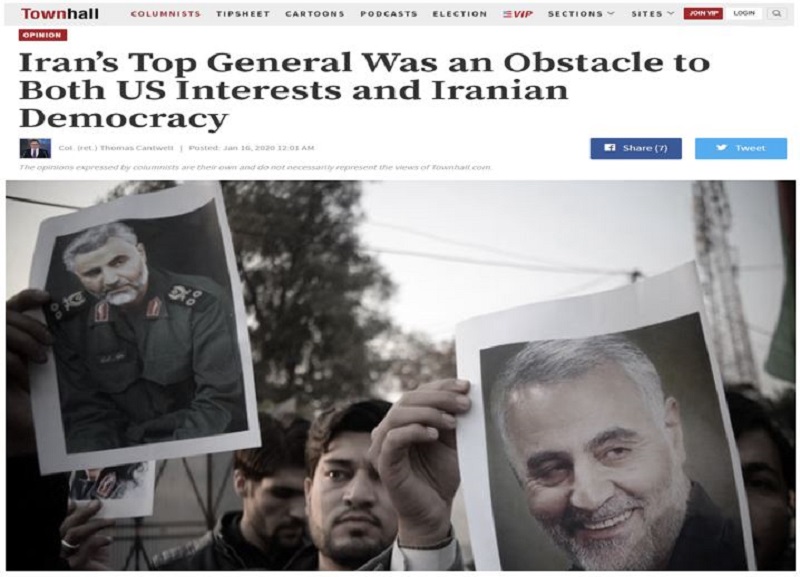 Thomas Cantwell, in an article on Townhall, said Qassem Soleimani chief of Quds Force was an Obstacle to Both US Interests and Iranian Democracy

In an article published on Townhall on Thursday, Col. (ret.) Thomas Cantwell, a former U.S. Army officer who was in charge of protection of the People’s Mojahedin Organization of Iran (PMOI, Mujahedin-e Khalq or MEK) members in  Camp Ashraf, Iraq, called eliminated Qassem Soleimani, chief of  the Revolutionary Guards (IRGC) Quds Force “an Obstacle to Both US Interests and Iranian Democracy.”

“The protests in Iran in the past four days directly targeted the regime’s Supreme Leader Ali Khamenei. Angry about the mullahs’ criminal obfuscation regarding the IRGC’s downing of a passenger plane, protesters called for a change of the entire regime. Chants of “Death to Khamenei” and “Death to the oppressor, whether the Shah or the [supreme] leader,” showed that Iran wants to be liberated from tyranny once and for all,” said  Cantwell.

While referring to the Iranian people’s abhorrence toward Soleimani as a mass murderer and tearing down his pictures Cantwell wrote, “In scores of videos, young protesters and especially women, tore down or set fire to publicly displayed portraits and pictures of Qassem Soleimani, the regime’s Quds Force commander, who was killed in Iraq by U.S. forces on January 3. These acts of bravery completely tarnished the state-orchestrated funeral ceremony.”

“Soleimani’s elimination removed one of the clearest threats to American interests and regional stability over the last 30 years,” Cantwell continued, “Soleimani was responsible for countless deaths across the Middle East. These include hundreds of American service members as well as victims of terrorist acts carried out by other Iranian regime outfits in places like Lebanon,”

“Soleimani’s orchestration of anti-American operations comprised only a small fraction of his crimes. As the leading player in Tehran’s support of Syrian dictator Bashar al-Assad, Soleimani enabled a litany of human rights abuses, leading to hundreds of thousands of deaths and millions of people displaced,” he added, referring to Soleimani’s active role in oppressing Syrian people and their uprising.

In his article, Cantwell also mentioned to the Quds Force various attacks against the MEK in Iraq, which was commanded by Soleimani. “Additionally, Iraqi militias operating at the behest of Soleimani carried out a full-scale assault on exiled Iranian dissidents residing in eastern Iraq. This city, known as Camp Ashraf, had been the home to thousands of members of the main Iranian opposition, the Mujahedin-e Khalq (MEK). In a September 2013 attack, 52 innocent residents were brutally massacred,” he said.

“The assault was one of the last in a list of 40 terrorist attacks on Camp Ashraf and the temporary MEK settlement at Camp Liberty, which were attributed to Soleimani. Between 2009 and 2016, the Quds Force was ultimately responsible for the killing in Iraq of at least 141 MEK members. Yet the overall community’s survival thwarted Tehran’s larger plan to strike a blow against the organized push for regime change in Iran,” he added.

Cantwell referred to the regime’s devastating role in Iraq which prepared the ground for the Islamic State to emerge and wrote, “It was the Iranian regime’s meddling in Iraq that crippled a pluralistic government in Iraq and paved the way for the rapid spread of the Islamic State (ISIS).”

In his article, Cantwell also spoke of the regime’s bogus claims of “taking harsh revenge” after Soleimani’s elimination, and wrote, “Tehran’s feeble reaction to the elimination of its No. 2 personality, Soleimani, further revealed its weakness, thanks to widespread popular protests. It fired 15 missiles against U.S. bases in Iraq as ‘revenge’ for Soleimani’s elimination. But compared to the 80 missiles launched against Camp Liberty dissidents in Iraq in 2015, this was an insignificant move. It was a pathetic propaganda tool meant to boost the defeated morale of IRGC personnel inside Iran.”

While referring to the regime’s institutionalized terrorism Cantwell wrote, “Still, attacks against internal protesters and on the MEK and other Iranian dissidents will certainly continue. But Soleimani’s absence creates a new opening for those whose democratic ideals had incurred his wrath in the past.”

Cantwell also referred to the second wave of the Iran protests and wrote, “Among the slogans during protests in Tehran and dozens of other cities in January were calls for the wholesale removal of the regime as well as demands for a halt to wasteful expenditures in places like Syria,” he continued, “The Iranian people have long recognized this regional force projection as a part of the clerical regime’s strategy for holding onto its power in the face of ever-growing popular dissent and diplomatic isolation. That is why they tore down pictures of Soleimani as a symbol of the regime’s expansionism.”

“For 25 years, Soleimani was the leading figure pursuing Tehran’s ominous objective at home and in the region. Although his funeral was widely televised in western media, the public rejoicing across Iran, Iraq, Lebanon, and the public displays of hatred toward his portraits during recent protests, is a more reliable signal that the ayatollahs’ demise looms on the horizon,” Cantwell concluded.