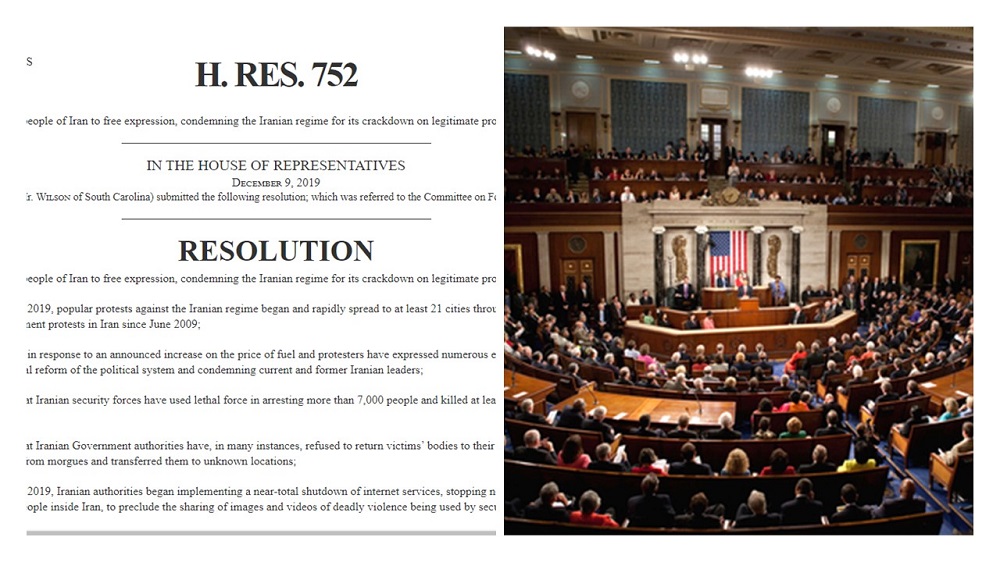 H. Res. 752 of the U.S. Congress in Support Iran Protests

The U.S. House of Representatives unanimously passed House Resolution 752 on Tuesday, entitled, “Supporting the rights of the people of Iran to free expression, condemning the Iranian regime for its crackdown on legitimate protests, and for other purposes.”

This resolution, sponsored by Congressman Ted Deutch (D- Florida), was introduced soon after the nationwide Iran protests in November and enjoyed bipartisan support.

The House Resolution highlights that “Iranian security forces have used lethal force in arresting more than 7,000 people and killed at least 208 in connection with the protests.”

Condemning the regime’s deadly crackdown on protesters, the Resolution also referred to the massacre in the southern city of Mahshahr on November 18, 2019, and wrote: “Iran’s Islamic Revolutionary Guard Corps deployed to the city of Mahshahr and engaged in mass repression, reportedly killing as many as 100 people.”

The bi-partisan House Resolution also condemned the massacre of over 30,000 political prisoners in 1988, mostly members and supporters of the People’s Mojahedin Organization of Iran (PMOI, Mujahedin-e Khalq or MEK), and wrote: “In 1988, the Iranian regime carrying out the barbaric mass executions of thousands of political prisoners by hanging and firing squad for refusing to renounce their political affiliations and in some cases for possessing political reading material, including prisoners of conscience, teenagers, and pregnant women.”

In this resolution, the U.S. House of representative called for a series of actions:

Ms. Soona Samsami, the U.S. Representative of the National Council of Resistance of Iran (NCRI-US), welcomed the unanimous passing of H.Res.752 and said: “This timely bipartisan resolution sends an unequivocal and powerful message to the people of Iran that U.S. Congress fully supports them in their nationwide uprising for a free Iran and that it strongly condemns the massacre perpetrated by the Iranian regime in November.”

Ms. Samsami added: “The NCRI’s President-elect, Mrs. Maryam Rajavi, has repeatedly underscored that the slaughter of protesters in November was a manifest case of a crime against humanity and, therefore, the United Nations Security Council must take urgent action to halt the killings and suppression and secure the release of those arrested.”

This is an uprising to end 40 years of dictatorship and terrorism in #Iran. Regime Leaders must face justice for crime against humanity #IranProtestshttps://t.co/i2TCyZsivl pic.twitter.com/GLdVnf7JBI

Previous articleIran Protests: U.S. Congress Resolution in Support of Iranian People’s Nationwide Uprising for a Free Iran
Next articleMEK and The Iranian Regime’s Culture of Lies