On June 5, the International Atomic Energy Agency’s Board of Governors was provided with the latest report on the status of the Iran nuclear deal or Joint Comprehensive Plan of Action (JCPOA). And on June 15, the Board convened to discuss the issues raised by that report.

It was already well understood that Iran had fully abandoned compliance with the agreement as part of an effort to pressure the European signatories into providing additional financial concessions. But the IAEA report also underscores some of the Iranian regime’s prior failures to live up to the spirit of the deal, which promised not only restrictions on the Iranian nuclear program but also greater transparency from the institutions behind it.

Long before the latest report and even before the US pulled out of the deal in May 2018, there had been well-established skepticism about the seriousness of Tehran’s commitment.

The new IAEA report and Board of Governors review provide brand new validation for these criticisms. They address outstanding questions about three sites where nuclear work appears to have taken place without ever being acknowledged or explained by Iranian authorities. IAEA inspectors found traces of nuclear material at each site, while satellite imagery and other intelligence pointed to those sites having been sanitized in a desperate attempt to conceal the evidence of what went on there.

The most naïve supporters of the JCPOA seem to have viewed Iran’s initial compliance as evidence that the regime had nothing left to hide, if it ever had in the first place. The latest revelations conclusively upend that notion. The failed sanitization efforts are a red flag in their own right. But the regime’s persistent refusal to discuss the true purpose of those locations should be a source of even greater alarm for those who have been tasked with keeping Iran from developing a nuclear weapon.

Since before the JCPOA went into effect, the predominant concerns about it were that limited restrictions on Iranian nuclear activity would only encourage the regime to continue its work in secrecy. While this might not strip the restrictions of all value, it would potentially allow Tehran to essentially wait out the clock, making incremental advancements in areas that were not receiving much scrutiny, then rush to enrich uranium to weapons grade as soon as “sunset provisions” of the JCPOA kicked in.

Those who dismissed this possibility must now ask themselves one vital question: If Tehran has remained mum about three nuclear sites that have since been discovered, how many other sites could still be awaiting discovery?

There is no standing requirement for Iran to provide access to undisclosed sites. And if any such sites come under suspicion as a result of separate intelligence gathering, the regime has 24 days to dispute an access request under the terms of the deal. This constitutes a significant delay on its own, even if Russia and China   – Iran’s allies on the United Nations Security Council – do not obstruct Western efforts to explore areas with potential connections to Iran’s ambition to obtain a nuclear weapon.

As should have been obvious to anyone involved in negotiating the JCPOA, there was little reason for Tehran to insist upon such a provision unless it had something rather significant to hide. As it was the case with one of the sites in IAEA report, the Lavizan-Shian site. On May 15 and 16 2003, in three separate press conferences in Washington, Paris and Berlin, the National Council of Resistance of Iran (NCRI) revealed the Lavizan-Shian site. Following these revelations, the Iranian regime cleared and destroyed the site in December 2003 by replacing the topsoil of the site down to 4 meters deep. 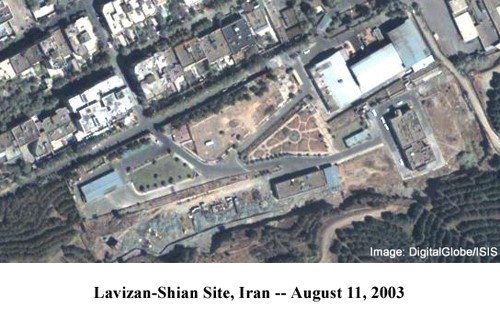 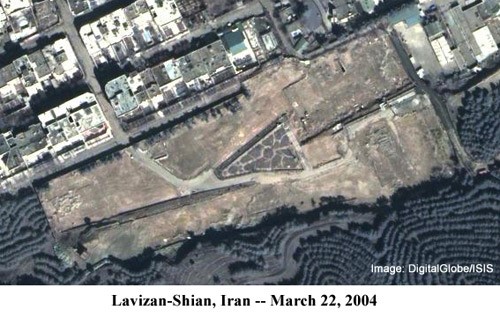 The IAEA’s new revelations all but confirm that this was the case. But the slow progress of requests for clarification prevent the international community from immediate understanding the exact nature of the regime’s secrets.

Meanwhile, Tehran’s newfound awareness of its own failures may be guiding its scientists toward a better understanding of what they will be required to do in order to conceal the evidence of any current nuclear activities that might be going on at sites that have still not been identified by satellite imagery or intelligence assets. Even though the regime cannot realistically hope to keep up its secrecy forever, the world must understand that every gap in knowledge is dangerous, as is every delay in enforcing the perceived restrictions on Iran’s nuclear development.

For more than two years, the White House has been promoting a strategy of “maximum pressure” on the Iranian regime as an alternative to the lax enforcement codified by the JCPOA. It has predictably faced stubborn opposition not only from the Iran-aligned signatories but also from Britain, France, Germany and the European Union as a whole. They generally remain committed to the 2015 nuclear deal even now that Iran has fully ceased to comply with the restrictions it imposed.

But everyone has a breaking point and it has yet to be seen whether European commitments will remain as strong now that Iran’s ongoing deceptions are being revealed. It was always obvious to many observers that Iran would neither comply with restrictions over the long-term nor provide real transparency about its activities unless it was forced to do so.

“Maximum pressure” could accomplish this via economic pressure and diplomatic isolation. Negotiations like those that led to the JCPOA will only encourage the mullahs to greet their adversaries with one hand and stab them in the back with the other.