MEK: Virtual Free Iran Conference on June 20: A Glance at Its History 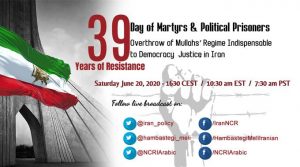 Iranians, supporters of the People’s Mojahedin Organization of Iran (PMOI/MEK), will hold an online gathering on June 20, marking 39 years of struggle for a free Iran. This conference will be attended by thousands of Iranians from different parts of world, as well as renowned political luminaries from across the globe. June 20 is the Iranian Resistance’s “Day of Martyrs and Political Prisoners.”

This conference, which will be broadcasted by the National Council of Resistance of Iran (NCRI) on Twitter, intends to echo the voice of the Iranian restive society for regime change. A regime that has only brought misery to the Iranian people by wasting their national resources on terrorism and nuclear program, oppressing them and causing natural disasters via its wrong policies, such as its mishandling of the COVID-19 outbreak.

When Ruhollah Khomeini, the Iranian regime’s founder, hijacked the anti-monarchy revolution in 1979 and tried to impose his reign of terror and oppress the people, the MEK and its leader Massoud Rajavi, as the only progressive Muslim group who had fought the monarchy regime, were the first to oppose the mullahs’ regime. The MEK used the semi-democratic situation after the 1979 revolution until 1981. Massoud Rajavi even participated in Iran’s first presidential race but was banned from participating by Khomeini for not having voted for the regime’s “Velayat-e Faqih” or absolute rule of clergy article of the constitution.

The MEK’s differences with Khomeini and his regime dated back to the 1970s and stemmed from its opposition to what is known today as Islamic extremism. Infuriated by the position taken by the MEK against his regime and worried about the MEK’s growing popularity, Khomeini secretly mobilized and ordered a brutal crackdown against the MEK and its supporters. Between 1979 and 1981, some 70 MEK members and sympathizers were killed and several thousand more were imprisoned by the Iranian regime.

On June 20, 1981, the MEK called for a nationwide demonstration. In Tehran alone, over 500,000 people participated in the MEK’s peaceful protest and marched toward the regime’s Majlis (Parliament).

Khomeini ordered the Revolutionary Guards (IRGC) to open fire on the demonstrators, killing thousands on the streets and arresting people on a large scale. Many of these prisoners were executed without being identified. June 20, 1981 marks the beginning of the Iranian Resistance movement to overthrow the religious fascism ruling Iran. A movement with over 120,000 martyrs. The Iranian regime has never ceased killing and torturing MEK members and supporters, and in return the MEK has never stopped its struggle for freedom and democracy in Iran.

Under these circumstances, on July 21, 1981, a month after the beginning of Khomeini’s reign of terror, Massoud Rajavi founded the National Council of Resistance of Iran (NCRI), a coalition of Iranian opposition forces that aspired to replace the religious fascism with a democratic, pluralist and secular state.

Since 1981, MEK activists have been the prime victims of human rights violations in Iran. Over 120,000 of its members and supporters have been executed by the Iranian regime, 30,000 of who were executed in a few months in the summer of 1988, based on a fatwa by Khomeini, which stated any prisoners who remained loyal to the MEK must be executed. That fatwa is still in effect today.

The regime used the appeasement policy and wasted Iran’s national wealth to mobilize over 13 governments to destroy the MEK and the Iranian Resistance. This began in 1997 with the United Sates designating the MEK as a Foreign Terrorist Organization (FTO), which was described then by the American media as a “goodwill gesture” toward the Iranian regime and its newly appointed so-called “moderate” President Mohammad Khatami. European countries followed the same pattern, replicating the U.S.’s move in 2002, designating the MEK as terrorist organization.  The appeasement policy not only prolonged the regime’s life but resulted in death and suffering of the Iranian Resistance’s members.  The bombing of MEK camps in Iraq during the 2003 U.S.-Iraq conflict, the attempted coup-d’état of July 17, 2003 on the NCRI headquarters in France, and the numerous raids and rocket attacks against MEK camps in Iraq were just some of the gifts that the policy of appeasement and its orchestrators delivered to the Iranian regime.

All these bogus and baseless designations were revoked by the European Courts and the U.S. Court of Appeals after legal battles that lasted more than 15 years and resulted in the victory of justice and truth.

Today, the MEK remains a strong and cohesive organization, with a broad reach both worldwide and deep within Iran, and with its growing number of “Resistance Units,” has played a leading role during the recent nationwide Iran protests. The MEK and the NCRI have played a vital role in exposing the regime’s nuclear activities.  In a nutshell, the Iranian Resistance chose to prevent an aggressive, virulently sectarian and repressive religious fascism from obtaining nuclear weapons capability, and save Iran, the region, and the world from the horrors of such a scenario.

The Iranian Resistance has and will continue this fight for freedom.