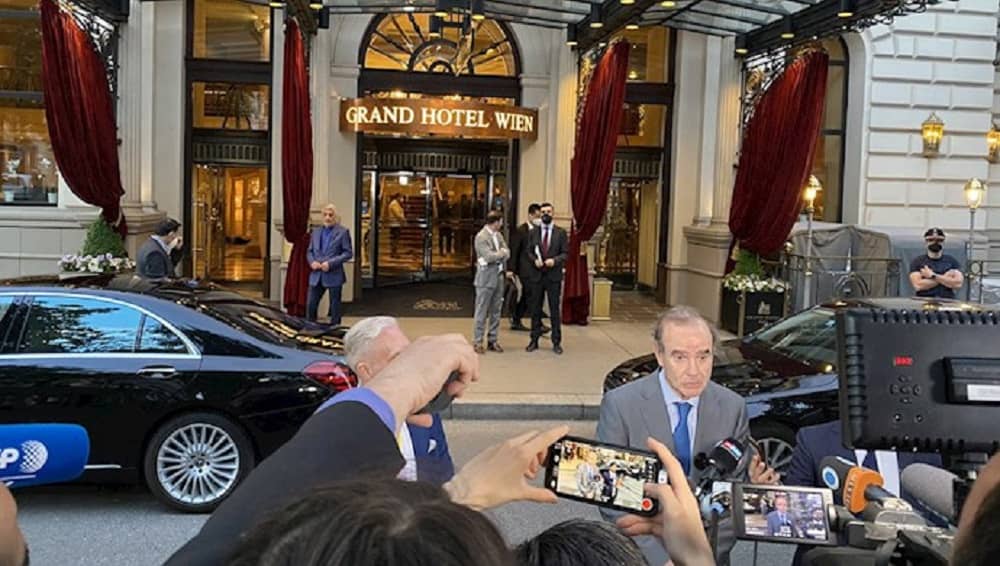 The United Kingdom, France, and Germany presented a joint statement to the International Atomic Energy Agency on Wednesday expressing deep concern over the advancement of Iran’s nuclear program and the effects of its systematic violations of the 2015 agreement known as the Joint Comprehensive Plan of Action. Although critics of Iran’s conduct should welcome any such statement from the parties most responsible for keeping the JCPOA on life support, they should also recognize that with this particular position the E3 is essentially preaching to the choir. The statement served mainly to repeat back to the IAEA the very same observations that that UN body had made in its own report earlier in the week.

The E3’s condemnation of Iran’s “escalatory steps” and “irreversible consequences for Iran’s nuclear capabilities” seems to at least indicate that European authorities are paying attention to the warnings offered by the IAEA. However, that condemnation will remain toothless for as long as the three countries refuse to specify any retaliatory measures they might undertake in order to hold the Iranian regime accountable. The language of the E3 statement is weak to the point of being non-committal, except when it comes to the question of whether the JCPOA will remain in place despite Iran’s more than two-year-long violations of its terms.

After thanking the IAEA and its Director-General Rafael Grossi for the report, Wednesday’s statement immediately declared that the UK, France, and Germany “remain fully committed” to restoring the existing agreement. But this runs contrary to the advice that Grossi offered in advance of the report’s release when he publicly criticized Tehran for a lack of credibility and declared that “it is not possible” to simply return to the JCPOA as written, now that “Iran has accumulated knowledge, has accumulated centrifuges and has accumulated material.”

Grossi recommended, instead, that ongoing talks in Vienna by JCPOA signatories should aim to address Iran’s more recent advancements via “an agreement within an agreement.” Such statements only reinforce the challenges already posed by Iran’s intransigence in the Vienna talks and in diplomatic discussions more generally.

Since before the relevant meetings began in early May, Iranian officials have been insisting that the only outcome they would accept was the immediate and comprehensive suspension of all economic sanctions that were re-imposed or newly imposed by the United States after then-President Donald Trump pulled out of the JCPOA in May 2018. Through six rounds of negotiations, there has been no sign of Iran’s position softening, even as the new American administration floated proposals for a compromise agreement.

The E3 evidently remain unwilling to take such assertive action, even as they demonstrate some awareness of the regime’s intransigence.

Thus, the demands in Wednesday’s statement fail to reflect the situation described in the IAEA report. Its authors continued to urge a simple return to the status quo despite the fact that the very same statement highlighted issues that have made that goal untenable. The E3 criticize Tehran for continuing its escalatory behavior “at a time when all JCPOA participants and the United States are engaged in substantive discussions.” But they emphasize that the goal of those discussions is merely to “restore the JCPOA” and they describe Tehran’s actions only as “regrettable.”

These relatively gentle phrases appear in the same paragraph as the reference to “irreversible consequences” and a paragraph before the E3 specify that those consequences specifically include “nuclear weapons-related knowledge gains.” By pairing such a dramatic description of Tehran’s malign activity with feckless language regarding the Western response, the E3 risk strengthening a sense of impunity that has developed among Iranian regime authorities over more than four decades of mostly permissive Western policies.

This permissiveness was arguably underscored by the fact that the E3’s response to the damning content of the IAEA report was directed back at the UN nuclear agency instead of at the Iranian regime. Although Wednesday’s statement did “urge Iran to stop and to reverse any action contrary to the JCPOA,” its conclusion implied that the main purpose was to encourage Director General Grossi and the IAEA to continue with monitoring activities that they are clearly already committed to, but that have become steadily more difficult to maintain in recent months as a result of Iranian regime obstructionism.

Unfortunately, it is still very likely that the response from the E3 will be to focus its efforts on convincing the US to lift economic sanctions and thus secure Iran’s commitment to re-implementing the JCPOA. What European officials should be doing, however, is developing contingency plans for when Iranian regime’s negotiating position remains entrenched late into this month and beyond. Instead of pressuring the US to overlook “irreversible nuclear weapons-related knowledge gains” by the Iranian regime and cease exerting pressure on it, the E3 should resolve to add to that pressure through their own sanctions and diplomatic measures.

In absence of this coordination, there are only two feasible options from the Vienna talks: either the US capitulates to Iranian intimidation and Tehran reclaims all the economic benefits of the JPOCA without facing any consequences for its “escalatory steps” or else the existing, unilateral pressure remains in place and Tehran adds to those steps in a way that further shrinks its nuclear breakout period.

It is difficult to overestimate how much that window has already shrunk during the past two years and especially during the past several weeks. According to the IAEA report, Iran has produced more than two kilograms of uranium metal since March and about 2.4 kilograms of 60-percent enriched uranium just since the start of May. The former substance is a key component for the core of a nuclear weapon and the latter is just a small step away from being further enriched into weapons-grade uranium. Furthermore, the IAEA report underscores Tehran’s ongoing refusal to explain the presence of nuclear material in at least three undisclosed sites, which raises the possibility that its stockpiles are even larger than available data suggests.

Of this latter issue, the E3 statement says that the regime has made it “harder for the international community to assure themselves that Iran’s activities remain exclusively peaceful.” This is an understatement, but a potentially significant statement nonetheless, provided that the policymakers behind it actually prepare a plan for what to do when it becomes impossible to deny that Iran’s nuclear weapons aspirations are still alive and fully active.