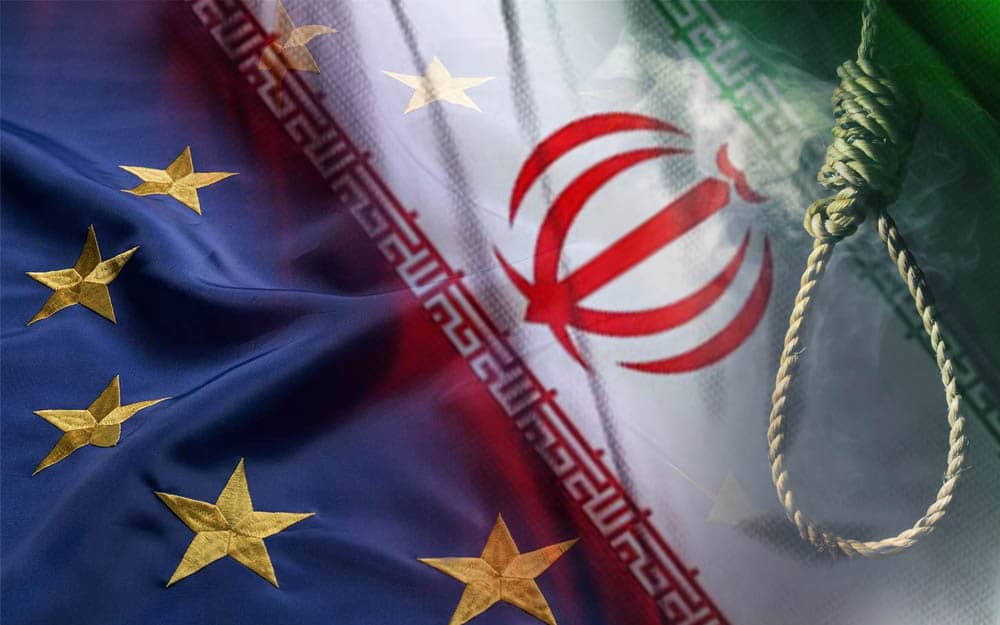 The nations of Europe share a long, shameful history of appeasing Iran’s theocratic regime. They have done so in the face of that regime’s pursuit of nuclear weapons, as by signing onto a weak agreement in 2015, which Iran was able to violate instantly and with impunity after deciding it was not accruing sufficient economic benefits from its erstwhile adversaries. They have done so in the face of rampant human rights abuses, even turning a blind eye to a massacre of some 30,000 Iranian political prisoners in the summer of 1988. And they have even done so in the face of terrorist activity that included threats to Western property, personnel, and vital interests.

There has been little change in this tendency over more than four decades of failed efforts to spur an illusory trend of moderation within the Iranian regime. Unfortunately, that fact has only emboldened Iran’s malign activity in each of the above categories. But fortunately, there is emerging evidence that Iranian authorities have pushed their luck too far, exposing themselves to ever-greater volumes of international criticism and pushing at least some Western policymakers to a breaking point wherein they can no longer tolerate the growth of Iranian threats and offenses.

In 2018, after facing no serious consequences for its provocative moves against commercial shipping in the Strait of Hormuz or for its severe crackdown on a nationwide uprising that was underway at the start of that year, the regime saw fit to accelerate its conflict with opponents both at home and abroad.

From December 2018 to January 2019, citizens of more than 100 Iranian cities and towns took part in protests that called for a wholesale government change. And after that movement was driven back underground following dozens of killings and thousands of arrests by government authorities, the Resistance leader Maryam Rajavi called for the activist community to pursue a “year full of uprisings.” Recognizing the connection between this appeal and a range of localized protests and labor strikes, the regime resolved to undermine the main source of international support for Iranian “Resistance units.”

In March, that goal inspired a plot to set off a truck bomb at the Albanian headquarters of Iran’s leading opposition group, the People’s Mojahedin Organization of Iran (PMOI-MEK). When the plot was thwarted, and two Iranian diplomats were expelled from the country, the regime simply set its sights higher, directing another high-ranking diplomat to lead a mission to bomb the annual gathering of Iranian expatriates organized in France by the MEK’s parent coalition, the National Council of Resistance of Iran.

The diplomat in question, Assadollah Assadi, was the third counselor at the Iranian embassy in Vienna when he traveled back to Tehran, acquired more than 500 grams of the high-explosive TATP, and smuggled it back into Europe using a diplomatic bag. He then handed it off to two co-conspirators in Luxembourg while a fourth operative prepared to separately infiltrate the target venue. Fortunately, the plot was thwarted through the coordination of multiple European authorities, but if it had been successful, it would have no doubt resulted in hundreds of deaths, including some of the European political dignitaries who were in attendance and were at times close to the plot’s main target, Mrs. Rajavi.

The potential severity of that attack, together with the brazenness of the regime’s use of diplomatic networks for terrorism, evidently prompted action from at least one European nation, Belgium. After Assadi was arrested in Germany, Belgium sought his extradition and initiated an investigation that lasted more than two years. Last November, he and his three co-conspirators went on trial in Antwerp, and on February 4 they were all convicted and sentenced to prison terms ranging from 15 to 20 years.

The conviction was arguably a watershed moment in Western relations with the Iranian regime, and the regime’s critics have highlighted it as a prospective marker for a broader shift in European policy. Unfortunately, any optimism they felt on this topic has been tempered because the European Union and its other member states have not exactly followed the example.

Suppose European strategies of conciliation and appeasement persist in the days and months to come. In that case, it will be difficult to underestimate how much Tehran will attempt to exploit that climate to further expand its malign activities. And in the wake of multiple nationwide uprisings by the Iranian people, that outcome would be a twofold disaster.

In the first place, the bulk of Iran’s impunity will be leveraged to accelerate domestic crackdowns on dissent, which have already reached a scale that has arguably not been seen since the time of the 1988 massacre. In November 2019, when activists staged a follow-up to the December 2017 uprising and exceeded its geographic and demographic reach, authorities responded with the utmost brutality, opening fire on crowds and killing an estimated 1,500 people. There is no telling what the next escalation might consist of, but there will be no reason for Tehran to scale back unless it faces concerted pressure from the international community.

In the second place, Western conciliation would be a disaster under these circumstances because it would represent a tremendous missed opportunity. For all that the Iranian people have suffered in their recent clashes with the theocratic system, they have not been deterred by the repression. Indeed, even the regime’s Supreme Leader Ali Khamenei has warned that there could still be more MEK-led uprisings. Those warnings come despite the fact that the Resistance movement has been all but ignored by Western governments that should be its most natural allies.

To their credit, some American and European lawmakers recognize both the inroads that the Resistance has made against the regime and the value of the secular, democratic, and non-nuclear platform that Resistance has outlined. Those lawmakers were well-represented at the 2018 Free Iran rally, and they have since been leading the way in pushing their own governments to adopt or maintain policies that prioritize pressure over negotiation. They still have much work to do, but we can only hope that the EU leadership is not foolish enough to ignore their appeals in the wake of all that has happened over the past few years.

Previous articleIran News in Brief – March 11, 2021
Next articleIran’s Massive Brain Drain and Mullahs’ Role in It