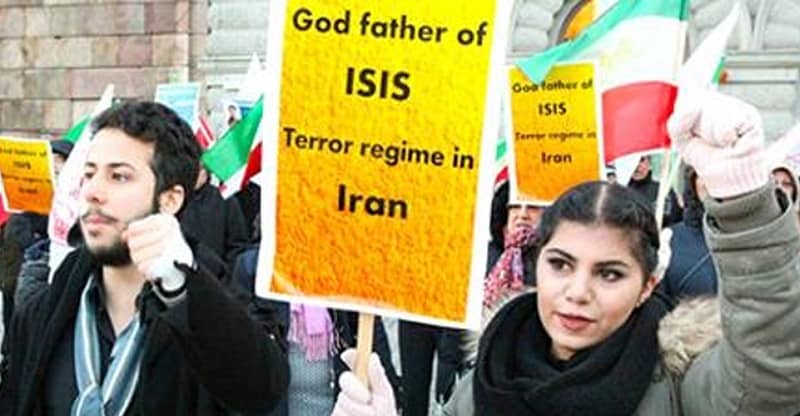 Donald Trump has called Iran “The leading state-sponsor of terror.” In July 2019, America imposed sanctions on Mohammad Javad Zarif, the Iranian foreign minister. He was identified by the US as an “illegitimate spokesperson for Iran”, which is State Department speak for declaring Zarif a terrorist. As Foreign Minister, Zarif is in charge of Iran’s army of ambassadors and diplomatic staff. In June 2018, he was therefore responsible for the orders given to Assadollah Assadi, a diplomat from the Iranian Embassy in Vienna. Assadi was instructed to hand over 500gms of high explosives and a detonator to an Iranian couple from Antwerp. He ordered them to drive to Paris and detonate the bomb at a major rally organised by the National Council for Resistance in Iran (NCRI) and attended by over 100,000 people.

The huge rally in the Paris suburb of Villepinte was attended by MPs and parliamentarians from around the world. A combined operation by the German, French and Belgian intelligence services led to the arrest of Assadi and three other conspirators, all of whom are now in prison in Belgium. Assadi’s trial will begin next month. It will be the first time one of the regime’s diplomats has been caught red-handed and brought to trial, accused of terrorism. In an outrageous development, Assadi has told Belgian authorities that if he is found guilty there will be violent reprisals against European targets. Such a high-level atrocity could only have been validated by Hassan Rouhani, the so-called ‘moderate’ President of Iran and the country’s Supreme Leader, Ali Khamenei.

A virtual conference organised by the British Committee for Iran freedom was held on 15th October. The conference was chaired by Struan Stevenson, the former Scottish Conservative MEP and attended by a large number of cross-party MPs, peers, former MEPs and dignitaries. Speaker after speaker expressed their outrage at the actions of the terrorist Iranian diplomat and called for Iran’s embassies to be closed and their agents expelled from Europe. Labour MP Steve McCabe summed up the views of all the participants when he said: “There are those who argue for appeasement and more dialogue with the regime. It will not help. Iran is the leading sponsor of state terrorism. The only approach is to exclude the regime from the world community.”

.@steve_mccabe: Iran is the leading sponsor of state terrorism. The only approach is to exclude the regime from the world community and let them know that they must either provide free and fair elections or go. #ExpelIranDiplomatTerrorists #DisbandIRGChttps://t.co/ajY7z5po0m

Struan Stevenson pointed out that the senior diplomat whom Assadi had replaced in the Vienna Embassy was Mostafa Roudaki, another trained Iranian Ministry of Intelligence & Security (MOIS) agent. Roudaki had been redeployed to Albania by Zarif, with the rank of First Secretary in the Iranian Embassy in Tirana. He was joined there by a new ambassador appointed by Zarif, Gholam Hossein Mohammadinia, a former high-ranking Iranian intelligence official. Zarif had clearly instructed his new team of ‘diplomats’ in Albania that their main mandate was to track down and eliminate the People’s Mojahedin Organisation of Iran (PMOI/MEK) who have created a new base in the country, Ashraf 3, housing over 2,500 of their members.

.@STRUANSTEVENSON: For 40 years, Iran's regime has left nothing but death in its wake. We should close all of Iran's embassies & expel all their diplomats. Regime leaders should be indicted for crimes against humanity. #ExpelIranDiplomatTerrorists https://t.co/QpTazt06LI

But once again Zarif’s plans were thwarted. Albanian intelligence officers uncovered a plot to detonate a bomb at a Nowruz (Iranian New Year) gathering of PMOI/MEK members in Tirana. Two MOIS agents, together with Ambassador Mohammadinia and his First Secretary Roudaki, were expelled from the country by the Albanian Prime Minister Edi Rama. And these were not the only terror plots that bear the fingerprints of Zarif. In October 2018, the Iranian regime sent another senior MOIS agent – to assassinate an opposition figure in Denmark. He too now awaits trial on terrorism charges. Also, in 2018 two Iranian diplomats were expelled from the Netherlands for acts of terror. In the last 41 years, dozens of assassinations have been carried out by MOIS agents in Switzerland, Italy, Germany, Austria, France and Turkey. The fact that targeted eliminations can happen virtually un-challenged on European soil should be of great concern.

For the past 4 decades the mullahs’ revolutionary creed of radicalised Islam has left nothing but death and suffering in its wake. Pursuing their constitutional objective of spreading revolution to create a fundamentalist Shi’ite caliphate, the clerical regime has vigorously backed Bashar al-Assad’s bloody civil war in Syria; it has trained, financed and commanded the brutal Shi’ia militias in Iraq; it has sponsored the Hezbollah terrorists in Lebanon and the Houthi rebels in Yemen; it has bankrolled and inspired the export of proxy-wars and terror throughout the Middle East and the wider world. This theocratic fascist dictatorship has wrecked the Iranian economy, plundered the people’s wealth, ruined the environment and turned this once great nation into an international pariah.

Deploying the Islamic Revolutionary Guards Corps (IRGC) – the regime’s Gestapo, the mullahs have unleashed a homicidal blitz on their own population, crushing dissent, wantonly murdering and maiming thousands of peaceful protesters. Iran’s jails are bursting at the seams with political prisoners, many of them young students, male and female, arrested during the nationwide uprising in November 2019. Under the mullahs Iran has achieved pole position as the world’s number one executioner on a per capita basis.

In the summer of 1988 the summary execution of more than 30,000 political prisoners in Iran took place, in an atrocity that surely must rank as one of the most horrific crimes against humanity of the late twentieth century. The vast majority of the victims were PMOI/MEK activists. The mass executions, in jails across Iran, were carried out on the basis of a fatwa by the regime’s then-Supreme Leader, Khomeini. Many of the key executioners from that time are now in positions of power in Iran. Alireza Avaie, one of the most brutal murderers of political prisoners in 1988 is now Rouhani’s Minister of Justice.

It was the common view of those attending the British Committee for Iran Freedom Conference that if the EU and UK are serious about terminating the Iranian regime’s bomb factories and eliminating their spies, we should close all of Iran’s embassies and expel their diplomatic staff. Khamenei, Rouhani, Zarif and other leaders of the regime should be indicted for genocide and crimes against humanity and brought to trial in the international courts. The time has come for these arch criminals and murderers to be held to account. The EU and the UN must stop its appeasement of this fascist regime.

Struan Stevenson is the Coordinator of the Campaign for Iran Change (CiC). He was a member of the European Parliament representing Scotland (1999-2014), president of the Parliament’s Delegation for Relations with Iraq (2009-14) and chairman of Friends of a Free Iran Intergroup (2004-14). He is an international lecturer on the Middle East and is also president of the European Iraqi Freedom Association (EIFA)