To Confront Tehran’s Terrorism Abroad, Address Its Terror at Home 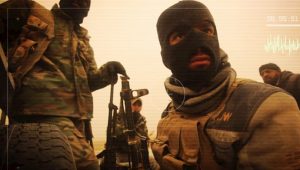 37 years ago, on October 23, 1983, at 6:22 in the morning, a truck carrying 2,000 pounds of explosives drove into an American Marine compound in Beirut, Lebanon. 241 US service personnel were killed in the terrorist attack orchestrated by the Iranian regime and executed by its proxy Hezbollah.

30 years later, the US District Court ordered the release of $1.75 billion in Iranian frozen assets to set up a fund for families of victims of the 1983 bombing. That money was never delivered to grieving families. Instead of demanding Tehran to pay up, the Obama administration astonishingly paid exactly $1.7 billion in cash to the regime in 2016. The irony, right down to the similarity of the figures (1.7), cannot be overlooked.

There are those who say that the maximum pressure campaign is the main culprit for Tehran’s unbridled terrorism. But, in fact, the US appeasement policy that cultivated the Iran nuclear deal in 2015 remains to be the main motivator for the regime’s terror.

Paying the world’s foremost state sponsor of terrorism billions of dollars in cash, even as it is found guilty of murder by American courts, is perhaps not the smartest thing to do; especially if you want to avoid enriching terrorists who kill Americans in Iraq.

This is not a partisan quibble. Historically, administrations of both parties have been fond of appeasing Tehran simply because it is the least costly option during a four-year election cycle. Long term, however, appeasing terrorist theocrats multiplies their ambition.

By 2018, the regime, killing with impunity for 40 years, graduated to a new level of terrorism. Previously, the regime used proxies. In June 2018, however, it used one of its official diplomats, Assadollah Assadi, a counselor in its embassy in Vienna, Austria, to transport a sophisticated explosive in his diplomatic pouch.

Assadi personally delivered the bomb to Luxembourg where he handed it over to a sleeper cell. The explosive was supposed to be detonated at a major international gathering of opponents of the Iranian regime, the main opposition Mujahedin-e Khalq (MEK), in a Paris suburb.

Had the plot not been foiled, the 500 grams of powerful TATP explosives would have killed and injured hundreds among the 100,000 attendants at the rally, which included senior former U.S. officials and prominent American human rights advocates.

Assadi was later arrested in Germany. He is now arraigned and will appear in court on November 27.

The regime has conducted numerous terrorist acts in Europe and every time the culprits have either successfully fled or were imprisoned for a short while only to be sent back to Iran by timid European authorities. The Assadi affair is the first time, however, that a sitting regime diplomat is being tried on terrorism charges in Europe. European authorities have, reportedly, so much evidence that even a former regime ambassador to Berlin has sounded alarm bells in Tehran.

But the debate has never been around legal technicalities. The issue is political will to stand up to a criminal enterprise.

Today, at a minimum, all the publicly reported evidence shows that the orders for the Paris bombing in 2018 were issued by the regime’s Supreme National Security Council and later approved by Khamenei, the regime’s supreme leader. The right response would be to hold the entire regime accountable for its crimes.

The policy of imposing sanctions on the regime is not one motivated by blind antagonism or rejection of diplomacy. It is a policy that sees the menace of the regime and detects that to prevent more murder a firm response to the murderer is needed. If we don’t hold the murderer accountable, they will continue to murder.

Those who oppose sanctions on Iran miss the point. Without sanctions, the murderers and terrorists in Tehran will have no incentive to back down, especially if they get $1.7B in cash.

More importantly, Tehran’s foreign terrorism is a function of its domestic terrorism. If the West wants Tehran to stop terrorist acts against its citizens, it cannot avoid forging a bond with the main victims of the regime’s terror: The Iranian people.

That is why the Iranian people welcome more sanctions on the regime. They are playing the long game and seek an end to the theocracy, not just a deal with it. The millions of people who marched in the streets in November 2019 and burned the regime’s symbols of terrorism, including offices of the Islamic Revolutionary Guard Corps (IRGC), understand the need to be firm against tyranny.

The West should condemn the regime’s human rights abuses against those people and protesters, and put the spotlight on Tehran’s crimes against humanity, especially the massacre of 30,000 political prisoners in 1988.

Tehran’s terrorism in the region and in the West cannot be stopped without simultaneously addressing its terror at home. Both have a common denominator: A desperate theocracy that bites only when others show fear of its bark.

Previous articleIran News in Brief – October 23, 2020
Next articleIran: Terrorist Plots Reveal the Iranian Regime as Both Dangerous and Vulnerable