What To Make of the Infighting Within Iran’s Theocracy 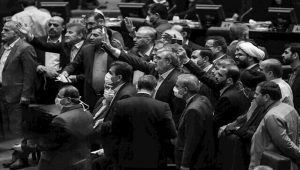 The recent escalation in factional feuds within the Iranian regime has pundits scrambling to put their spin on it. The pro-engagement crowd is highlighting Hassan Rouhani’s recent remarks about the need to revise the Constitution through a referendum. They see this as a sign that the election of Joe Biden as the new U.S. President has empowered Rouhani to openly challenge the Supreme Leader Ali Khamenei.

This reasoning has revived hopes in some western policy circles that the so-called “moderates” are on the ascent and if provided with sufficient concessions, they would be in a position to change the theocratic state’s policies.

The factual experience of the past 41 years makes it palpably clear that any euphoria over prospects for change in the behavior of the Iranian regime is unfounded. No change occurred when Khomeini died in 1989, or when the so-called pragmatist Ali Akbar Hashemi Rafsanjani became President, or when Mohammad Khatami, dubbed by some as Iran’s Gorbachev with sprinkles of Alexis de Tocqueville, assumed power in 1997.

The unvarnished truth is that regime “moderates” have been in power 33 year out of the regime’s 41-year history (80% of the time). The most brutal and widespread suppression of dissident and assassinations at home and abroad have occurred in those years.

In 1988, when “moderate” Mir Hussein Moussavi was Prime Minister, the massacre of 30,000 political prisoners, mostly from Iran’s main opposition, the Mujahedin-e Khalq (MEK), was carried out. Dozens of Iranian dissidents were assassinated in European capitals and elsewhere by Tehran’s hit-squads when Rafsanjani was president. And the infamous chain murders of intellectuals happened during Khatami’s Presidency. If that’s moderation, what’s extremism?

Last but not least, the highest number of executions occurred during Rouhani’s tenure, not to mention the bloody suppression of two major uprisings in December 2017 and November 2019.

Rouhani was Rafsanjani’s de facto deputy when the latter was in charge of the devastating eight-year war against Iraq. To this notorious record one must add the regime’s cover-up and deception regarding the nuclear weapons program, the expansion of Tehran’s ballistic missile program, the tens of billions of dollars spent on propping up the criminal Bashar al-Assad regime in Syria, funding and training the Houthis in Yemen, and the terrorist Shia militias in Iraq, as well as sending thousands of missiles to Hezbollah in Lebanon.

As if that’s not enough, under Rouhani, the regime plotted to blow up a gathering of tens of thousands of Iranians and foreign nationals, including hundreds of current and former senior US and European officials, in Paris in 2018. A senior Vienna-based diplomat of the regime, Assadollah Assadi, was caught red-handed delivering dangerous explosives from Tehran on a commercial flight and then driving 1,000 kms from Vienna to Luxembourg to personally hand it over to two terrorists who were assigned to detonate it during the event. He and his three accomplices are now in jail, awaiting sentencing by a court in Belgium.

Repression and terrorism are part of the regime’s DNA, regardless of its factions. Internal feuds are not so much about moderating behavior as they are about gaining a larger share of power at the expense of average Iranians.

When it comes to strategic issues, such as the nuclear program, the export of terrorism, and domestic crackdown, there is absolutely no difference between the regime’s factions. Ironically, one of the leading officials involved in the 1988 prison massacre, Mostafa Pour-Mohammadi, was Rouhani’s Justice Minister during his first term. And who did Rouhani replace him with during his second term? Alireza Avayie, another official directly involved in the 1988 killings.

When Rouhani’s interior minister Abdolreza Rahmani Fazli was asked why protesters were shot in the head and heart during the November 2019 uprising, he brazenly responded: “We shot them in the legs too.” No less than 1,500 protesters, mostly young people, were shot in cold blood in various cities across Iran during that unprecedented uprising.

As the regime grows weaker and more vulnerable under the weight of crippling sanctions, popular discontent over mismanagement and corruption, and the catastrophic coronavirus crisis, which has claimed the lives of nearly 200,000 Iranians, the two competing camps are more likely to squabble over how to save the entire ship from sinking.

Under the circumstances, the onus is on the international community to adopt a firm posture and demand accountability, ending nearly four decades of mischief the mullahs have been engaged in with total impunity. For once, the world needs to stand with the long-suffering Iranian people rather than with this or that faction of a murderous theocracy.

By Alejo Vidal Quadras On March 1, European diplomats and business leaders will be joining virtually with their Iranian counterparts for a three-day conference to...
Read more
Op-ed

By Alejo Vidal Quadras It has now been several days since a high-ranking Iranian diplomat was convicted of plotting to carry out a major terrorist...
Read more
Op-ed