Struan Stevenson – EU Plumbs the Depths of Appeasement With Iran 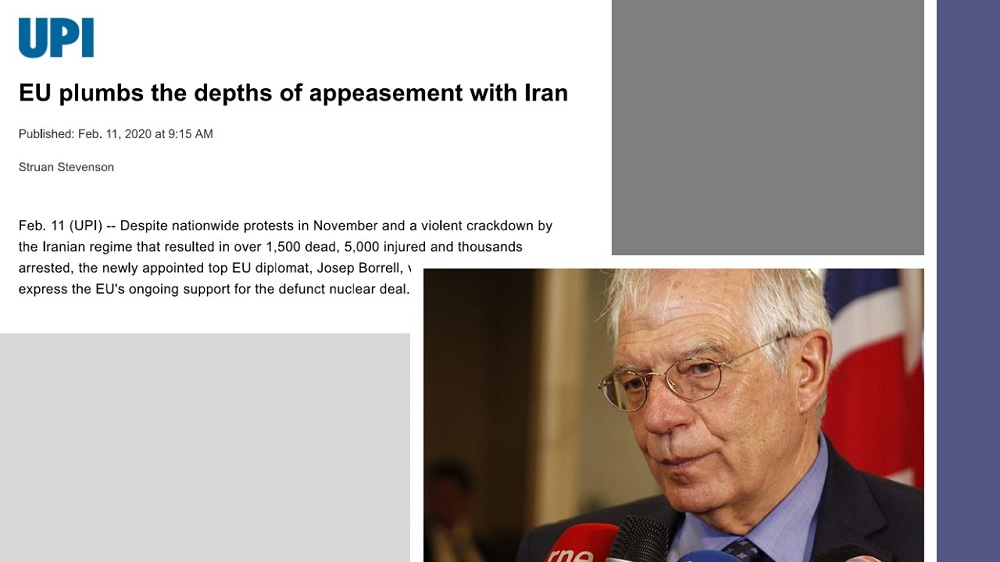 Struan Stevenson, a former member of the European Parliament representing Scotland, in an article published on the United Press International on February 11, condemned the European Union’s policy of appeasement towards the Iranian regime. He particularly criticized the recent travel of Josep Borrell, the EU’s High Representative, to Iran and urged him to side with the Iranian people in their quest for freedom.

“Despite nationwide protests in November and a violent crackdown by the Iranian regime that resulted in over 1,500 dead, 5,000 injured and thousands arrested, the newly appointed top EU diplomat, Josep Borrell, visited Tehran on Feb. 3 to express the EU’s ongoing support for the defunct nuclear deal,” wrote Mr. Stevenson.

While referring to Borrell’s visit to Iran and his failure in bringing up the issue of human rights violation Mr. Stevenson wrote: “In his press release highlighting the visit, Borrell made no mention of the regime’s downing of the Ukrainian airliner and the subsequent loss of 176 lives. Nor did he mention the murderous attack on young protesters during the November uprising by the Islamic Revolutionary Guards Corps, the regime’s Gestapo. Indeed, shamefully, he made no mention of human rights whatsoever. Instead, he claimed that his visit would allow him ‘to convey the EU’s strong commitment to preserve’ the 2015 nuclear deal and to discuss cooperation between the EU and Iran.”

Referring to the condemnation of Borrell’s visit to Iran, especially by European lawmakers and figures, Mr. Stevenson wrote: “His visit has attracted widespread condemnation across Europe. A conference involving Italian lawmakers was held in the parliament in Rome on Wednesday, where speaker after speaker attacked Borrell for his failure to uphold human rights and to condemn the theocratic regime’s policy of domestic oppression and aggressive expansionism across the Middle East”

He urged Borrell to “Break loose from the dead hand of appeasement that his predecessor Federica Mogherini blindly followed. She was a frequent visitor to Tehran and a slavish appeaser of the fascist theocratic regime, wearing the veil in deference to the misogynist mullahs and even posing for selfies with the turbaned tyrants in the Iranian parliament. She was also an arch-critic of the U.S. administration’s reimposition of tough sanctions on Iran.”

“After eight blood-soaked years in Syria, Bashar al-Assad’s civil war lurches on, backed by the Iranian regime to the tune of over $20 billion and an estimated 2,500 Iranian fatal military casualties so far. The Houthi rebels continue to foment unrest in Yemen, fighting a proxy war on behalf of their Iranian sponsors. The Iranian mullahs fund and control the brutal Shi’ia militias in Iraq, who have murdered thousands of innocent Sunnis. They provide massive financial support for the terrorist Hezbollah organization in Lebanon and for Hamas in Gaza,” he added.

“Soleimani had been sent to Baghdad by Iran’s supreme leader Sayyid Ali Khamenei to quell Iraqi protests, which had broken out across the country, with millions of students and young Iraqis demonstrating their outright opposition to Iranian meddling in their internal affairs. Soleimani had boasted publicly, “In Iran, we know how to deal with protesters.” Masked gunmen from the Tehran-controlled Popular Mobilization Forces, deployed by Soleimani, then murdered over 270 of the unarmed Iraqi protesters, in a shoot-to-kill strategy similar to the one he had ordered in Iran,” he added, referring to the eliminated chief of the Revolutionary Guards (IRGC) Quds Force, Qassem Soleimani.

In his article, Mr. Stevenson reminded Mr. Borrell and the EU that, “Every dollar spent in pursuit of their policy of aggressive Islamic revolutionary expansionism is a dollar stolen from the 80 million beleaguered Iranian citizens who are facing, domestically, a collapsing economy, disintegrating medical system, rapidly diminishing groundwater and an environmental crisis.”

“The IRGC, which controls most of the Iranian economy, brutally crushes anyone who stands in its way. It was Soleimani, as leader of the powerful paramilitary organization’s overseas arm — the Quds Force — who supervised Iran’s direct involvement in every conflict. That’s why he had been listed by the Americans as Iran’s number one terrorist and that was why Trump ordered a drone strike on his convoy at Baghdad Airport” Mr. Stevenson added, referring to the deadly crackdown imposed for years by the IRGC on the Iranian people.

“Borrell needs to open a new chapter on EU policy in the Middle East. He must accept that appeasement has failed. Europe’s desperation to placate the Iranian mullahs arose directly from the ashes of the Obama administration’s policy. But Iran’s increasing hostility in recent months, with their explosive stealth attacks on oil tankers in the Strait of Hormuz and missile strikes on Saudi oil installations, proves that they are not prepared to abandon their belligerent behavior,” read the article.

“Borrell must persuade the EU to give up trying to revive former U.S. President Barack Obama’s flawed deal, which never stopped the mullahs’ clandestine attempts to build a nuclear weapon and indeed simply released $150 billion of frozen assets that the regime rapidly used to sponsor their policy of aggressive expansion and international terror,” Mr. Stevenson added.

Calling the EU appeasement policy and its fruitless efforts to revive the already dead 2015 Iran nuclear deal with world powers “shameful,” Mr. Stevenson wrote: “It is shameful to see the EU placing more emphasis on trade and commerce than on human rights. The people of Iran expect Europe and the United Nations to be on their side. They expect their calls for democracy to be taken seriously. Human rights and women’s rights cannot be compromised or marginalized on the pretext of political considerations, trade deals or the flawed nuclear agreement. Obama’s appeasement policy, lamely followed by the EU, is dead in the water.”

“As Europe’s new high representative for foreign affairs and security, Borrell must tell the people of Iran that they have EU support and that Europeans stand shoulder to shoulder with them in their struggle to overthrow the tyrants,” Mr. Stevenson concluded.