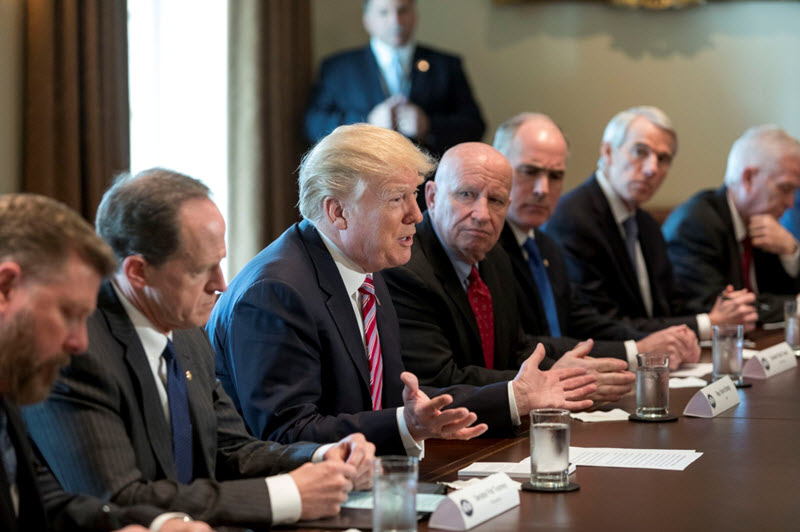 U.S. President’s “maximum pressure” campaign on the Iranian Regime appears to be effective after even Iranian President Hassan Rouhani has admitted that the country is facing “unprecedented” pressure from US sanctions and threatened a return to rationing that was last implemented during the 1980-88 Iran-Iraq war.

On Sunday, Rouhani said: “The [current] pressures by enemies are a war unprecedented in the history of our revolution.”

These comments came after tensions with the US had risen significantly with the deployment of the USS Abraham Lincoln aircraft carrier and its strike group to the Middle East following “troubling and escalatory indications and warnings” about plots by the Iranian regime.

The Lincoln, the guided-missile cruiser USS Leyte Gulf, and three destroyers – the USS Bainbridge, USS Mason and USS Nitze – arrived on Thursday. B-52s from the 20th Bomb Squadron also landed in Qatar and elsewhere in “southwest Asia” in recent days. While, on Friday, the Pentagon announced it would also send a Patriot missile battery and the USS Arlington to join the Lincoln.

The Us has not specified what the threat was, but national security adviser John Bolton warned that any attack on American interests or allies by the Iranian regime would face “unrelenting force.”

This escalation has only further put into question the future of the 2015 nuclear deal signed by six world powers and Iran. The US pulled out in May last year, but the UK, France, Germany, Russia and China remained a party to it, as did Iran regime.

However, the Iranian regime announced last week that it had suspended two commitments made under the deal and threatened to increase its uranium enrichment within 60 days if the remaining five countries did not shield the Regime from US sanctions. The European countries said that they remained committed to the nuclear deal, but rejected Iran regime’s “ultimatums”.

It is clear from all of regime’s recent actions that the US’s sanctions are having their intended effect and dealing a significant blow to the Iran regime’s economy by pushing the value of the rial to record lows, driving away investors, and increasing protests.

And the US has done all of this without a major spike in crude oil prices that could have made the move politically untenable in the US, if morally right.

The US has made it clear from the start that they don’t want war with Iran, but instead to force a change in the mullahs’ behaviour; something repeated last week by Trump. The problem is that the Regime is incapable of change; something demonstrated when a senior cleric spoke of destroying the US navy fleet headed toward the Gulf “with one missile”.

It is imperative that the rest of the world take this threat seriously and help the US increase pressure and sanctions on the Iranian regime in order to stop the Regime from posing a threat to global security.