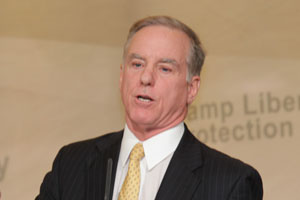 Iraqi Prime Minister Nouri al-Maliki is a murderer who slaughtered 52 residents of camp Ashraf with American weapons, former US Governor Howard Dean has told a conference in Paris.

The Iraqi leader should now be brought to justice and US aid to his country cut off, Mr Dean told delegates at the gathering on December 7 on the eve of International Human Rights Day.

He said: “There are 3,100 Iranians in Iraq that the USA disarmed and gave each one a promise, in writing, that we would protect them. When the 52 people in Ashraf were murdered in cold blood in September, each one of them had one of those cards in their possession.

“I seek to redeem the honor of my own country which has failed to stand up for its promises and has repeatedly lied to our Congress about what’s happened, lied to the Iranian Dissidents, and lied to the American public.”

“The first recommendations that I have is that the US Congress cut all military and civilian aid off the Prime Minster Maliki.

“We have to ally ourselves with the people who keep their words, who are non violent and who seek democracy, that does not include Prime Minster Maliki.

“Prime Minster Maliki murdered those 52 people and he did it with our weapons. Our State Department testified before the Congress of the United States that there was no evidence that the Iraqi Government had anything to do with the murders in Ashraf.

“That was a lie. Our State Department testified before the Congress of the United States that the people at Camp Hurriah had a significant number of T Walls and other defense administration. That was a lie. They did not have that equipment.

He added: “So I call on the United States government, I call on the administration to get serious. We should be part of a war crimes tribunal to put before the International Criminal Court all those people including Nouri al-Maliki who have committed genocide in Liberty and Ashraf with our weapons.

“I call on my country to be great again to stand for the democracy indeed and not just in word and to keep its promises to these 3,100 unarmed Iranian exiles who we promised to protect.”