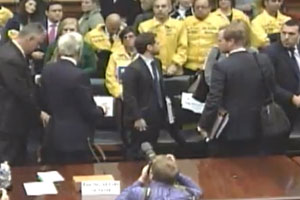 Secretary of State John F. Kerry surprised members of Congress on Tuesday by revealing that the whereabouts of seven Iranian dissidents kidnapped in a deadly raid on a refugee camp in Iraq is classified.

His comment suggests that the Obama administration knows their whereabouts and whether they are being held by Iraqi Prime Minister Nouri al-Maliki as a favor to Iran’s theocratic rulers.

The State Department has insisted it has no proof that Iraq is holding the one male and six female Iranian dissidents kidnapped Sept. 1 in a raid that left 52 other dissidents dead.

Rep. Ileana Ros-Lehtinen pressed Mr. Kerry for an answer about the hostages when he appeared before the House Committee on Foreign Affairs to discuss the Iranian nuclear deal.
“Are they in Iran or Iraq?” the Florida Republican said. Mr. Kerry said he would have to discuss that with her in a classified briefing.

Rep. Dana Rohrabacher asked Mr. Kerry if the Obama administration would support a bill he introduced that would give U.S. refugee status to more than 3,000 Iranian dissidents in Iraq.

“They are under constant threat of being murdered,” the California Republican said.

Mr. Kerry said he would have to see the bill.

The dissidents of the former armed wing of the National Council of Resistance of Iran surrendered their weapons to U.S. troops in 2003 and remained under U.S. protection until 2009, when the Obama administration turned them over to the Iraqi government.