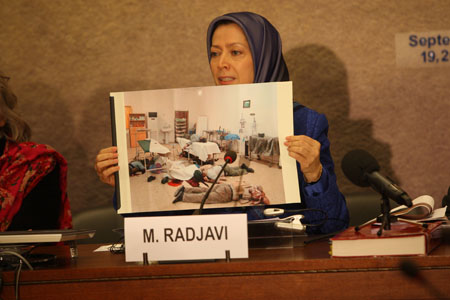 The United States and United Nations must take urgent action to secure the release of seven hostages taken captive during the massacre at Camp Ashraf, Iranian Resistance president-elect Maryam Rajavi has demanded.

The UN must also provide a permanent Blue Helmet force at Camp Liberty to protect Iranian dissidents in Iraq from further deadly attacks, Mrs Rajavi told an international symposium at the UN headquarters in Geneva on Thursday September 19.

And she also called for a full independent investigation into the Ashraf bloodbath in which 52 residents were murdered at point blank range by Iranian-backed militia on September 1. 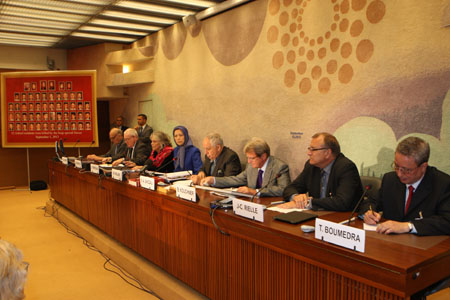 Mrs Rajavi said there was ‘no doubt’ that the Ashraf hostages were being held in a prison near Baghdad airport by forces under command of Iraqi Prime Minister Nouri al-Maliki.

And contradictory statements by Iraqi officials were simply aimed at setting the stage for handing them over to the religious fascism ruling Iran, she said.

She added: “The US government, the European Union, and the United Nations must make it clear to the government of Iraq that suppression of the Iranian dissidents in Iraq and holding the hostages will have a profound impact on economic and political relations with Iraq.”

Mrs Rajavi demanded the transfer of 17,500 T-walls and other protective equipment such as vests and helmets from Ashraf to Liberty, and allowing the double-layering of trailers’ ceilings as necessary steps for providing minimum protection for the residents.

She also called for guaranteeing the residents’ rights of ownership of their moveable and non-moveable property at Ashraf and permitting the sale of their property under the supervision of the American Senator Robert Toriccelli, their legal representative.

Other participants also condemned inaction by the US and UN regarding the seven Ashraf hostages, and demanded they stand by their promises to protect all Iranian dissidents in Iraq.