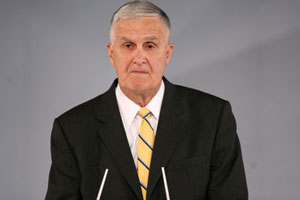 By: General Hugh Shelton, Source: The Washington Times
While the world awaits a United Nations decision regarding Syria, another humanitarian tragedy has
taken place in Iraq’s Camp Ashraf. It was an outright massacre and must not be ignored. On Sept. 1,
at least 52 Iranian dissidents, including seven women, were executed — shot in the head and face,
several with their hands tied — according to a U.N.

defenseless civilians. In both Syria and Iraq, Iran’s fingerprints are clearly visible. While the mullahs
decry the use of poison gas, they have done nothing to prevent its use by their client state, Bashar
Assad’s Syria. That’s talking out of both sides of one’s mouth. They also threaten reprisals against
the United States and its friends, notably Israel, if the U.S. launches a punishing attack on Syria.

Meanwhile, with all eyes turned elsewhere, Iran’s mullahs ordered an attack by another of its puppets,
Iraqi Prime Minister Nouri al-Maliki, against the Iranian dissidents living in Iraq. These were individuals
who assisted the United States in the 2003 invasion of Iraq and who were subsequently offered
American protection, in writing. Today, the U.S. State Department insists that the Iraqis promised to
provide protection, and the U.N. is on the scene, but the guarantee for that protection has become a
joke, culminating in a ruthless massacre of the dissidents in Camp Ashraf.

This month’s attack was not the first time that Iraqi forces have attacked the camp and another haven
for the dissidents, who are members of the Mujahedeen-e-Khalq, the principal Iranian opposition
movement. It will not be the last attack if the United States allows Iraq to continue to deny its
responsibility for protection of this group or dodge blame its direct involvement in the massacre.
Washington must not allow Iraq to continue to behave act in this manner with impunity.

The most recent victims were among the 100 residents allowed to remain at Camp Ashraf until the
final disposition of their property. The State Department forced the rest of the 3,200 residents to
move to Camp Liberty, near Baghdad, while the U.N. “debates” their final destination. At Camp Liberty
— a disgrace to the name — residents have been rocketed, humiliated, abused and denied basic
human needs. Prisoners at Guantanamo Bay, Cuba, and Fort Leavenworth, Kan., live in better and
safer conditions.

The United Nations has issued another protest. Secretary-General Ban Ki-moon condemned the
attack and urged the Iraqi government to launch an investigation into what happened. Having the
Iraqis investigate the incident is like having Mr. Assad investigate the gassing of his own citizens. Iraq
knows what happened and why: because the Iranian regime told Mr. al-Maliki to have his troops
perpetrate this atrocity. The secretary-general went on to express “his sorrow and extends his
deepest condolences to the families of the victims.” Nice words, but that won’t bring back the 52
victims.

making the point to “call on Iraqi authorities to act with
urgency to immediately ensure medical assistance to the wounded and to secure the camp against
any further violence or harm to the residents . Those found to be responsible must be held fully
accountable.”

However, this is not the first occurrence. It’s time for the United States to remind Iraq that these
residents were promised U.S. protection and that another incident of this nature will result in severe
repercussions — no more warnings. Either these loyal residents should be evacuated or a plan
should be in place to bring Mr. al-Maliki to his knees if the recent attack is repeated. It is time for
President Obama and his team to use language that Mr. al-Maliki understands.

While the world is debating the tragic events in Syria — and it surely should do so — this is a case
where the United States had a direct commitment to every individual at Camp Ashraf. That pledge was
ignored. The tragedy could have been avoided if Washington had heeded the warnings. Camp
Liberty will suffer liquidation unless we hold Mr. al-Maliki and his Iranian sponsors to account now.
As Maryam Rajavi, president-elect of the Iranian resistance, said, “The atrocious massacre in Ashraf
demonstrated the ruthlessness and brutality of the religious fascism ruling Iran and its puppets in Iraq.
Machine-gunning the wounded in Ashraf clinic and delivering coups de grace to victims on hospital
beds is not far from poisoning.”

There can be no dispute with her contention that the United Nations and the U.S. government bear
“direct responsibility” for the security of residents of Ashraf and Liberty. In particular, protection of the
camps, which was illegally handed over to Iraqi killers in 2009, should be given to U.N. blue helmets,
according to international law.

In addition to a plan for reprisal should attacks recur, the United States should push for an
international fact-finding committee to conduct an independent and thorough investigation into the
Sept. 1 massacre, with input from representatives and lawyers of residents and victims. Findings
should be referred to the U.N. Security Council for prosecution and punishment of the perpetrators.
The United States made commitments to the residents of Camps Ashraf and Liberty. We should honor
them. That is the American way.

Retired Army Gen. Hugh Shelton is a former chairman of the Joint Chiefs of Staff.