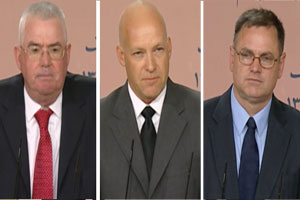 NCRI – Three U.S. military commanders who served in Ashraf have paid tribute to the victims of the massacre at Camp Ashraf on September 1 and blamed the United Nations for failing to protect the 52 Iranian dissidents who were killed.

The savage onslaught was branded a ‘crime against humanity’ by terrorist gunmen paid by the Iranian regime, and the international community must act now to defend the Camp from further attacks, the army chiefs said.

US Lieutenant Colonel Leo McCloskey told a ceremony on September 6 to commemorate the dead that he had promised the people of Ashraf in 2009 that they would be protected and now he ‘had been lied to’.

He said: “We have not given them the protection. We have made them commitment and these people dying today and tomorrow.

“This has got to stop. We as Americans have to help. These crimes against humanity cannot be tolerated. People need to be brought to justice. We need an international tribunal to try these people for these crimes.

“We need the UN to put people on the ground now, not next week or the week later. We need it now. We need more heroes like these people.

“I have not slept since the day in 2009 when I turned the responsibility over to the Iraqi army. They promised to protect these people and they haven’t. We have to stand up. We have to fight this injustice. Pray to God these people rest in peace.”

US Colonel Barry Johnson added: “The needless slaughter of 52 of your comrades in the latest attack and murder of residents both sickens and angers me. I assure you that it angers anybody who is in uniform and has been a part of mission to protect the people of Ashraf and Liberty.

“It angers me because we who believed in the promises of the US mean something and promise of protection to people in these camps mean something, the US utterly failing our commitment to you.

“We received a promise as well, a promise from the government of Iraq that they would hold the commitment of protection, but instead the people of Camp Ashraf and Liberty have received nothing but harassment and death.

“The time for more words and more promises has long past. The latest attack and murders must be seen as an immediate call to the US and the UN to take action. The actions have been spoken before I state them again.”

US Colonel Johnson said the first urgent priority was to protect the camps’ residents, and next a ‘real and impartial investigation’ must be conducted into the murders, and those responsible brought to justice under
international law.

He added: “The Iraqi government cannot be allowed to hide under their words in their own investigation.

“As a responsible citizen, I believe I must do everything in my power through these actions to help regain our honor and protect the people in the camps Ashraf and Liberty.”

And Colonel Cantwell told the ceremony: “As a military commander I was responsible for the security of Camp Ashraf 10 years ago in 2003.

“I have been responsible for security in Ashraf. Ashraf is a large compound surrounded by miles of desert. I find it very difficult and in fact beyond belief that the security forces at Ashraf did not know that the camp was under attack, especially if it was attack from three different directions.

“I echo the calls for an impartial investigation by a third party. I would also say that the third party has to be outside UNAMI as well because it appears that UNAMI was partially complicit in a sense that they are apparently denying protective equipment to the people at camp Liberty.”

Thomas Cantwell said he wanted to remind US Secretary of State John Kerry that it was the third attack on the camps, and added: “We are still waiting for the investigation on the first two attacks and his own department, the US State Department made promises and yet they are unwilling to lead the US mission during this attack.

“So, I call upon the US State Department to investigate this attack and to commit to the security that they signed up to do.

“The security situation must be enforced by a trusted party form outside the government of Iraq. That is clear. Today we need an exhaustive criminal investigation at Camp Ashraf and we need to protect the 40 people that remain at Camp Ashraf.

“We need to protect those people. Every day that goes where we by and ignores them makes our government more responsible for the resolve.”

Previous articleIran: Three prisoners hanged in Kermanshah and Ilam
Next articleAfghanistan: At least 1 killed in protest at Iranian regime consulate