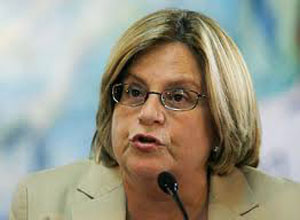 NCRI – Ileana Ros-Lehtinen, the chairwoman of the sub-committee on the Middle East and North Africa in the House Foreign Affairs Committee expressed her grave concern for the fate of seven hostages taken captive by Iraqi forces during the Camp Ashraf massacre on Sept 1.

Ms Ros-Lehtinen said in a letter to US Secretary of ate John Kerry: ” am writing to you to express my strongest condemnation of the kidnapping and killing of dozens of unarmed residents in Camp Ashraf.

“I am concerned that seven residents are still missing, and possibly kidnapped, and now other Ashraf residents fear that these seven may be in jeopardy of being extradited to Iran where they could face execution”

Many of those killed – who were ‘protected persons under the 4th Geneva Convention – had been handcuffed before being shot, and reports now indicated the atrocity was committed by the same Iraqi forces meant to be protecting the camp, she said.

The chairwoman of the sub-committee on the Middle East and North Africa added: “The Iraqi government has committed itself to providing the safety and security of these residents but it has not lived up to its obligations.

“I respectfully urge you to demand that the government of Iraq immediately investigate this horrendous attack and use all measures to prevent any further attacks on these defenseless residents until it can ensure the safety that these residents were clearly guaranteed in the memorandum of Understanding of 2011.”