Howard Dean: US must keep promise to protect Iranian dissidents in Iraq 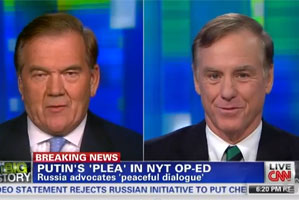 NCRI – The United States failed in its promise to protect the 52 victims of the camp Ashraf massacre and must act now to ensure the safety of all remaining Iranian dissidents in Iraq, a US governor has demanded.

Howard Dean said the ‘cold blooded’ killings were carried out on the orders of Iraqi prime minister Nouri al-Malaki, who must now be held to account for his crimes.

He told CNN’s Piers Morgan Live news show: “We have to stand up for people who can’t defend themselves, especially when every single one of them has a written promise from the United States.

“Seven of them were kidnapped and are probably going to be extradited to Iran where they’re going to be tortured and murdered. And we owe these people.

“When we disarmed them, we promised them in writing that each one of them has a piece of paper that says that the United States would protect them. We have not done that.

Governor Tom Ridge told the same show: “The 52 people that we’re basing a report of assassinations on were shot with their hands tied behind their back.

“At the end of the day, everyone of them may as well have been buried with the written guarantee from the Department of Defense that they received when they surrendered their means of self defense some time ago.

“We also are concerned about the remaining of 3200. And here’s where the UN could finally do something. Put some blue helmets there until the United States and the rest of the world figures out how to get these defenseless Iranian dissidents out of Iraq, because again suddenly and tragically, Iran now has more influence in Iraq than United States of America.”