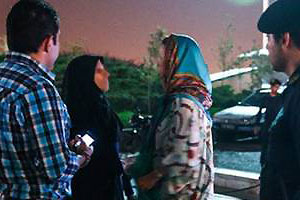 NCRI – The head of the Iranian regime’s police force, Brigadier General Esmael Ahmadi Moghadam, has ordered its forces to “intensify dealing with women who do have dressed improperly.”

State-run Mehr news agency reported that “the police have taken special measures including increasing vigor and crackdown in busy centers of Tehran to implement this command.”

On September 8th, a number of those who attended a concert in Milad Tower were arrested due to the way they were dressed.

The street arrests and interrogations targeting women and youth is a known tactic of intensifying repression by the mullahs’ regime.

In 2007, a plan called “promotion of social security” was implemented in Iran. In this plan, the police control the dress and social relations of citizens. This plan is an intimidation operation which is a reaction to the regime’s instability. The commander of security forces reiterated in June 2nd that arrival of mullah Rouhani government would not change the social security scheme.