Written by The Editorial Board
29th September 2013 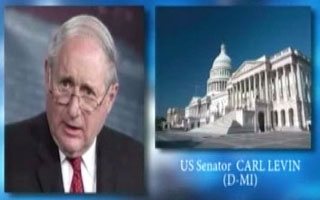 NCRI – In a letter to the U.S. Secretary of State John Kerry, Senator Carl Levin, the Chairman of the U.S. Senate Armed Services Committee expressed his deep concern about the seven Iranian dissidents abducted during attack on Camp Ashraf, Iraq.

Senator Levin called on the U.S. State Department to take action to secure the release of seven Camp Ashraf residents.

Below is the text of the letter by Senator Levin on September 24, 2013:

I remain deeply concerned about the horrific attack on the Mujahedin-e-Khalq (MEK)
residents of Camp Ashraf on September 1, The failure to prevent this attack needs to be
investigated thoroughly, and I urge you to press the Government of lraq (Gol) to cooperate fully
with the United Nations Assistance Mission in Iraq in investigating these events. The
perpetrators of this cowardly attack need to be brought to justice.

The fate of the seven Camp Ashraf residents missing since the attack is also of great
concern, In a 19 September 2013 letter, Catherine Ashton, the European Commission’s High
Representative of the Union for Foreign Affairs and Security, alleged that there was reason to
believe that these individuals were being detained near Baghdad and were at risk of being
transferred to Iran.

Over the weekend, the U.S. Embassy in Iraq released a statement saying that the United
States has no credible evidence of Gol involvement in “any activities regarding the abduction or
detention” of the missing MEK individuals. Please provide me the State Department’s
assessment regarding the whereabouts of the missing individuals and whether they are being held
in Baghdad. If so, I urge you to press Prime Minister Maliki to make every effort to secure these
individuals’ release.

At the same time, all sides must work urgently to ensure the security of the MEK
residents at Camp Hurriya. The sooner these individuals can be resettled to safety outside of Iraq
the better, and I hope the Department will redouble its efforts in this regard.