EDITORIAL: Continued Sanctions Against Iran’s Regime Is a National Demand 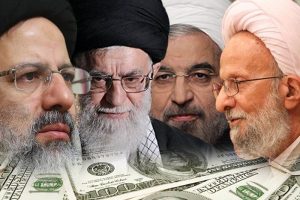 Last week, the Iranian regime’s Judiciary sentenced four men to have their fingers amputated for alleged theft. Meanwhile, the regime’s officials, including Supreme Leader Ali Khamenei, have plundered hundreds of billions of dollars of the people’s assets, at the cost of starvation of tens of millions of Iranians and the destruction of Iran.

Yet, the regime’s officials identify the international sanctions as the main reason for the country’s critical economic situation. The regime’s president, Hassan Rouhani, on September 12 claimed: “They do not allow us to use our money to purchase medications,” trying to connect all the country’s problem to sanctions.

All the while, the next day, Rouhani’s rival faction reacted in Parliament. They started attacking Rouhani, saying he was pining blame on the wrong place; and adding that the root to all problems goes back to Pasteur Avenue, where the presidential palace is located.

Regardless of the regime’s infightings over their ultimate survival, the Iranian people have concluded that Rouhani’s claims are basically lies and deceptions. Because there are no sanctions on food, medications, medical equipment, and agricultural goods, yet the regime tries to blame all the economic problems of people on sanctions.

A good indicator of Iran’s public atmosphere is that during the last two years all the protests over the economic situation have been against the regime in its entirety; not one has been against the sanctions.

In reality, economic problems, such as the high prices and people’s disastrous livelihood, are the result of corruption, plundering and embezzlements in the mullahs’ regime.

A glance at some examples of the Iranian officials’ plundering and embezzlements, reported by the state media, sheds light on this issue.

The official ILNA news agency reported on November 29, 2018: “$30 billion has been lost in the banking network in the last 10 months.”

Eshagh Jahangiri, the regime’s vice-president, on October23, 2019 acknowledged: “[They] took $22 billion of foreign exchange resources to Dubai and Istanbul to reduce the price of foreign exchange, but the fate of this money is unknown.”

The state-run Aftab-e Yazd daily in an article on November 11, 2019, wrote that around $18 billion had vanished. “The government allocated most of this $18 billion worth of currency to some individuals. They sold the received currency in the open market without importing goods and made huge profits.”

The state-run Bahar website, quoting Hossain Raghfar, one of the regime’s economists on April 17, 2020, wrote: “While $20 billion disappeared from the country during a major corruption scandal, today we ask the World Bank to give us $5 billion. Yet, no one is accountable for this.”

The state-run Sharq daily on May 2, 2020, reported that Mohammad Javad Zarif, the regime’s foreign minister, said: “We had to give $35 billion to some individuals. But it is not clear how they wasted this money and where they took it.”

The state-run Mehr news agency, on June 2, 2020, quoting Javad Karimi Qodosi, a member of the regime’s parliament, reported that on the order of Rouhani, “more than $36 billion was given to the bank of goods, currency, and drug trafficking.”

The state-run Tabnak news agency on July 14, while quoting Abdolnaser Hemati, the regime’s Central Bank chief, wrote: “In the last two years, $27 billion in foreign exchange has been provided to exporters, and we have not imported goods and currency in return for that.”

The state-run Khabar Online on July 21, 2020, reported that family members of Mohamad-Reza Nematzadeh, former Iranian minister of Industry, Mine and Trade, have embezzled 6 million euros from Iran’s petrochemical.

The state-run 90-e Eghtesadi website, on August 26, 2020, quoting another regime economist, Saeed Leylaz, wrote: “The distribution of dollars at the 420,000 rial rate and gold has caused the loss of $30 billion and 80 tons of gold.”

These are just a few of the many facts that have been reported in the state media. Only by summing up these figures can we conclude that at least $ 50-60 billion has been looted by the regime’s officials in the last two or three years. With the same amount of money, the meat consumed for seven years in Iran could have been provided. With this money, 18 years of wheat consumption in Iran could have been provided and two million sustainable jobs, according to standard international norms, could have been created. With this money, more than two million standard hospital beds and five million standard classrooms could have been built, and this money is equivalent to the national budget of a country with a population of 30 to 40 million people.

Currently, Iran’s economy is controlled by the state mafias. Thus, the so-called “kings” of coin, currency, mines, oilseeds, meat, game, asphalt, and graves are controlling Iran’s economy and people’s livelihood in their claws. And of course, all of these “kings” are connected to the godfather of plundering and mafia, Khamenei, the regime’s supreme leader.

As a result, the sanctions against this regime, which plunders the property of the people and cuts off the hands of the deprived people for stealing a piece of bread, must continue. This criminal regime would use every dollar they get against the Iranian people to preserve its survival.