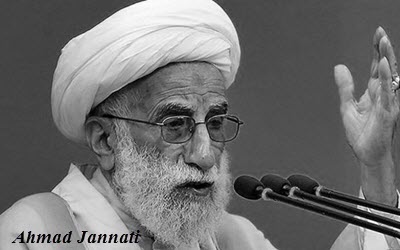 NCRI – The Head of the Assembly of Experts and the Secretary of the Guardian Council, Ahmad Jannati stated: “there are people in our society who do not earn enough to afford living, while we call our government Islamic.”

He also slammed Rouhani’s government and added: “meanwhile, the cabinet holds a ceremony in Karaj which costs 500 million Tomans ($155,500).”

Jannati attacked Rouhani’s government on March 7th in a formal meeting of the Assembly of Expert held on the eve of the presidential election. He asked Rouhani to apologize since the economic strength which Khamenei spoke of has not been implemented.

Jannati said: “we cannot rely on the words and statistics. The gentlemen have to say what measure they have adopted in order to make the people happy. If the economic strength is not implemented effectively, the authorities have to apologize.”

As the officials claimed the term “economic strength” stresses on the economic independence; when the government resists against possible sanctions. However, due to the corrupt structure of organs and institutions, this term has just become an empty slogan to tricks people.”

Following Jannati’s electoral remarks against the rivals, the Vice-President of the Parliament of Iran stated: “some people are more royalist than the king and they intend to idolize the Guardianship of the Islamic Jurist. I believe the Assembly of Experts does not carry out its duty well since the Constitution expressly states that the Assembly of Experts should constantly observe the Supreme Leader. Nevertheless, some think that it is an insult to use the word “observe” for the Supreme Leader.”

In response to a student who asked about Ali Motahari’s views on the Guardianship of the Islamic Jurist, he said:”the Supreme Leader could not arbitrarily take measures. So if he does anything at will then he should be automatically disregarded as the Supreme Leader.”

In response to Jannati’s remarks, Hassan Rouhani claimed that his government is “definitely winning in the economic strength”; saying that this question could not be worse than this.”

Rouhani responded Jannati in a speech on March 8th during his trip to Mashhad. He reiterated that it is irrelevant to ask questions regarding government’s success in the economic strength.

The Member of the Board of Directors of the Assembly of Experts, Ebrahim Raeesi in an interview with the journalists confessed to the economic problems; stating that the government shall submit a report about its doings since the Supreme Leader believes that the economic problems could be only eliminated by implementing economic strength.

Reuter in a report wrote about the reactionary Assembly of Experts:”while the presidential election is coming ahead, Rouhani does not speak of people’s salary. However, (the opponents) slammed him in the economic field.”

Reuter referred to Jannati’s speech and wrote: “he sharply criticizes the policy of negotiation with the world powers and he talks about Rouhani’s failure in improving the economic situation. He said that Rouhani has to apologize if the economic conditions fail to prosper.”

Previous articleIran: Thousands of Teachers Protest Demanding Release of Jailed Colleagues, Decent Living Conditions
Next articleThe Message of Maryam Rajavi to a Meeting at the U.S. House of Representatives