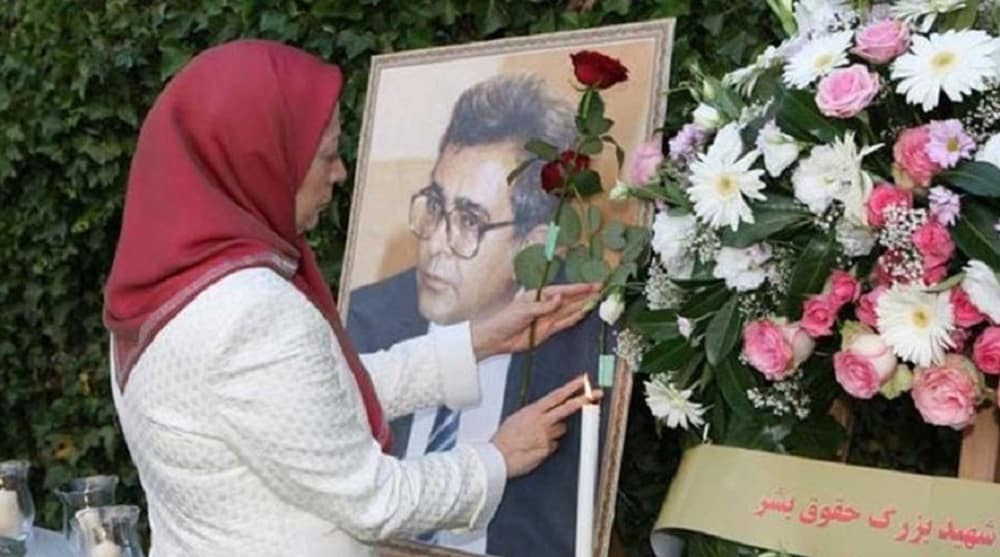 On Wednesday, Mrs. Maryam Rajavi, the president-elect of NCRI, welcomed a “historic turning point” in Western understanding of crimes committed by the Iranian regime. Mrs. Rajavi was commenting on the prior week’s ruling by the Swedish Federal Criminal Court, which upheld an appeal filed by the Iranian opposition.

Last year, the Iranian Resistance challenged a decision that was announced by a public prosecutor for the canton of Vaud, regarding the 1990 assassination of Dr. Kazem Rajavi, then a representative to Switzerland of the National Council of Resistance of Iran. Dr. Rajavi was ambushed and shot dead near his Geneva home in an operation that took place under the direction of Iran’s Intelligence Ministry. Members of the hit squad were soon identified, but all 13 soon fled back to Tehran.

Although arrest warrants remain outstanding for all 13, as well as for the regime’s former Intelligence Minister Ali Fallahian, Swiss authorities were prepared to close the case and vacate those warrants based on a statute of limitations, prior to the challenge. In fact, the crime in question should not be subject to any statute of limitations on account of being part of a larger phenomenon whereby the Iranian regime sought to eliminate organized opposition to its theocratic dictatorship.

Mrs. Rajavi reiterated this fact on Wednesday while commenting upon its ultimate success. The assassination of Dr. Rajavi was the continuation of the execution and massacre of the steadfast [MEK], based on Khomeini’s fatwa,” she said. Ruhollah Khomeini, the founder and first supreme leader of the Iranian regime, issued the fatwa in question in 1988 near the end of the Iran-Iraq war and explicitly called for the systematic execution of the Mojahedin-e Khalq (MEK) supporters on the charge of “enmity against God.”

The religious motives on display in that fatwa were highlighted in August by legal scholars who took part in an international conference that applied the context of “genocide” to the ensuing massacre of political prisoners. In the summer of 1988, “death commissions” throughout Iran oversaw the systematic interrogation and execution of over 30,000 prisoners, many of whom were buried secretly in mass graves after being denied contact with loved ones for several weeks. The August conference repeated longstanding calls for an international investigation into the killings and placed special emphasis on the role of Ebrahim Raisi, who is now the Iranian regime’s president.

Survivors of that massacre have extensively reported upon their interactions with and second-hand stories about Raisi, one of four officials who served on the Tehran death commission. Raisi was the most enthusiastic of those tasked to implement Khomeini’s fatwa – an assessment that is supported by the fact that the supreme leader personally granted Raisi an expanded jurisdiction during the massacre, apparently as a reward for his efficiency in handing down and then implementing death sentences in Tehran and the surrounding area.

Raisi’s recent appointment as president is a part of a larger phenomenon whereby participants in the 1988 massacre have been promoted through the ranks of the regime. Raisi had personally benefited from that pattern in 2019 when he took over as head of the judiciary, and it was in that capacity that he confirmed his ongoing commitment to violent repression by playing a lead role in the regime’s crackdown on a nationwide anti-regime uprising. About 1,500 peaceful protesters were killed as part of that crackdown during just a few days in November 2019, and authorities then began to systematically torture surviving participants over the course of several months.

Mrs. Rajavi highlighted this bloody crackdown in her statement on Wednesday, alongside a 2018 bomb plot that targeted an international gathering organized near Paris by the NCRI. These things, she said, “clearly showed that terrorism and repression are inherent and indispensable to the ruling religious tyranny.” These features of the regime should also serve as warnings about the persistent danger of that regime perpetrating crimes against humanity, including the crime of genocide.

Geoffrey Robertson, a UK human rights barrister, said in the August conference that there was “very strong evidence” in favor of that label, and Eric David, a Belgian professor of international law, said there would be “no legal difficulty” if any nation sought to claim “universal jurisdiction” and prosecute that crime. In fact, Robertson intimated that efforts to do so were essentially required of any nation that has ratified the Genocide Convention.
Pressure in favor of that outcome is sure to increase in the wake of the Swiss Federal Criminal Court’s ruling.

Neither the 1988 massacre itself nor the subsequent killings of pro-democracy activists should be ignored nor swept under the rug simply on account of the amount of time that has passed. The Swiss court has affirmed the need for those incidents to be formally investigated as examples of genocide and crimes against humanity. And the international community has thus been reminded of its prior failure to treat those crimes with the gravity they deserve.

In September 2020, seven UN human rights experts wrote an open letter to the Iranian regime officials in which they demanded transparency over the 1988 massacre and an end to the harassment of victims’ families and advocates. The letter noted that the United Nations had been aware of the killings at the time and had mentioned them in a general resolution on the regime’s human rights record at the end of that year. It then added that relevant bodies failed to follow up on the resolution and that this had had a “devastating impact” on the situation of human rights in Iran from that point forward.

The letter underscores the longstanding need for the sort of “historic turning point” that Mrs. Rajavi sees as having been achieved through the Swiss court’s ruling. Of course, much remains to be done in order to realize the potential significance of that turning point. But in the wake of more than 30 years of relative silence over the massacre of 30,000 political prisoners and the systematic assassination of dozens of expatriate activists, it is difficult to overstate the significance of any Western court or Western government acknowledging that Iranian officials such as Ali Fallahian and Ebrahim Raisi are guilty of genocide and other crimes against humanity. That, of course, is the first step toward them being held accountable at the International Criminal Court or by any Western authority with the courage to assert universal jurisdiction over these crimes.