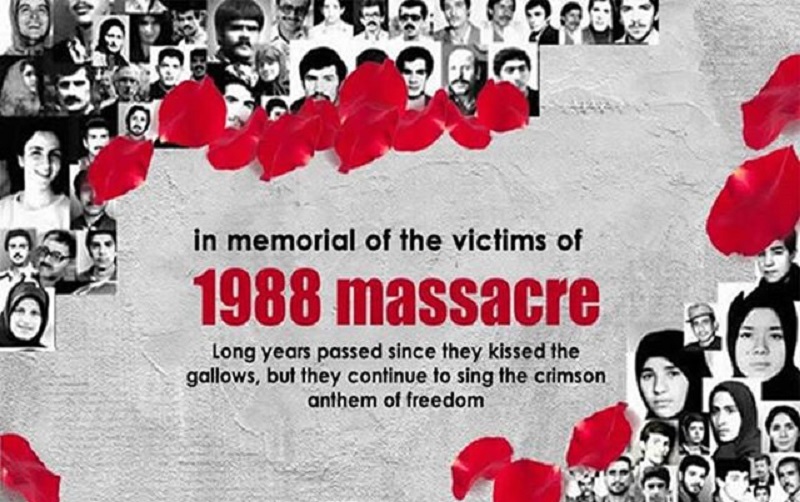 In some of the notes and assessments regarding the 1988 massacre, the period of the mass executions has been acknowledged as late July to September. Yet, according to reports and many eye witness accounts, the executions continued until early 1989.
The accuracy of this view, however, is on one hand-verified by the testimonies of eyewitnesses and the reports of the opposition Mujahedin-e Khalq (PMOI/MEK) in those months and on the other hand by the confidential orders and public speeches of the regime’s officials during that time.

Since early 1989, Khomeini issued repeated verdicts regarding the new missions of the most important officials of the massacre (Nayeri and Raeisi). He expressed concern about not doing enough to “fulfill God’s rule”.
In the verdict dated 14 January 1989, which was addressed to Nayeri and Raeisi, Khomeini gives them a mandate to deal with judicial cases in the cities of Semnan, Sirjan, Islam Abad, and Dorood. He orders them that “regardless of the official obstacles, [they must] perform with accuracy and urgency the divine decree”. (order to Messer Nayeri and Raeisi to deal with the judicial situation in cities Semnan etc. 1 January 1989, Sahifeye Nour, volume 21)
Two weeks later, another order was written and addressed to the main perpetrators of the massacre, Nayeri, and Raeisi, in which the subject was again set as “dealing with the judicial problems of Sirjan and Dorood”. This time Khomeini’s anger was clearly targeted at “the failure of God’s rule being carried out”:
“In the Name of God the Merciful. Since the top officials of the country’s judiciary have no sensitivity towards the above serious matters, a mission has been given to clerics Messer Nayeri and Raeisi to proceed in regards to the referenced issues according to what they distinguish and in the framework of the dear Islam. Surprisingly, such events occur under the rule of Islam; but the rules of God are not carried out in a very careless manner and other works become a priority to judicial matters.
Ruhollah Mousavi Khomeini – 14 January 1989”. (“warning the judicial officials and handling operation to the judicial problems of cities Sirjan and Doroud”, 14 January 1989, Sahifeye Nour, volume 21)
Three days later, Khomeini wrote a very blunt and critical letter to the members of the Judicial Supreme Council, saying that the most important sentence was regarding execution procedures: “I cannot bear the cancellation of God’s rule”… “I like you all very much, but I cannot be ignorant of the religious duty”. (“letter to the Judicial Supreme Council (some reminders to the members of that council)”, 17 January 2017, Sahifeye Nour, volume 21)
On 21 January 1989, Khomeini issued a more significant decree and gave Nayeri and Raeisi a dominant role over the whole judicial system. However, his main expressed goal was “to implement God’s rule”: “All the files that have unfortunately been resting in that council, and that has delayed the implementation of God’s rule, will be in the hands of clerics of Islam, Nayeri and Raeisi, so that they can complete God’s rule as soon as possible for which no hesitation is acceptable.” (“orders to Messer Nayeri and Raeisi (deal with resting cases in the Judicial Supreme Council)”, 21 January 1989, Sahifeye Nour, volume 21)
This verdict was later faced with many questions and interpretations in the judicial system. Two of the perpetrators of the massacre asked Khomeini in a letter that is his rule “referring to the execution of the divine or the issued verdicts regarding retaliation of oneself?” Khomeini’s response is short and firm: “The mission that I have given you… is divine and consists of retaliation”. (“letters to Messer Nayeri and Raeisi (carry out the “divine” and “retribution”)”, 22 January 1989, Sahifeye Nour, volume 21)
In regards to what “God’s rule” actually means, Khomeini clarified in his message on 23 February 1989 that it consists of the execution of political opponents: “We shouldn’t advertise in such a way to underestimate the rules of God and the divine rule under the influence of unnecessary and useless pity for the enemies of God and the dissidents and offenders towards the system”. (Ruhollah Khomeini, “Sahifeye Nour”, volume 21, pg. 286)
Even if we disregard this message, the political nature of the orders issued consistently by Khomeini to Nayeri and Raeisi cannot be ignored. These orders were not meant for the execution of “drug smugglers.” The execution of these people is considered “retribution”. These orders are also not meant for ordinary crimes; otherwise, there was no need for Khomeini to do so in secret. Another sign that verifies the political nature of these verdicts is that reports regarding these sentences were not published in the regime’s newspapers but were carried out in secret. These verdicts were unveiled many years later in Khomeini’s collection of messages and edits.

As a result, these verdicts are in all likelihood among the most important political projects of the regime during the massacre of political prisoners.

Some of the reports regarding the public hangings of members of the MEK have been published in state-run newspapers, including:

Islamic Revolutionary newspaper, 30 January 1989: “12 members of the Ayaran group were executed in Karaj. The names of these corrupt individuals are Safi Gholi Ashrafi…. Leader of the group, Ahmad Zangi, Yahya Taimouri, Heidar Ali Taimouri, Bahram Ali Taimouri, Sadrollah Siyah Mansouri, Seyed Haidar Nouri with the alias Vahid, Gholamali Taimouri with the alias Daryoush, Ruhollah Ashrafian, Aman ollah Siyah Mansouri, Ghorban-Ali Darvishi and Darvish Ali Taimouri. It is worth mentioning that 3 of those named above were publicly executed in Qods and Shahriyar towns and the rest were hanged in prison”.