Key Events of 1988 Massacre of Political Prisoners in Iran 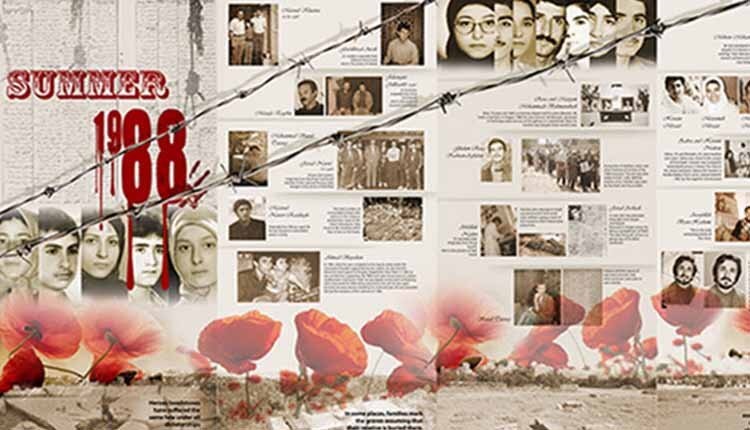 A study of the political situation in Iran in 1988, particularly the cease-fire of the Iran-Iraq war, Khomeini’s severe illness, the critical situation of his heir, and the threat imposed by the people and Resistance, all verify that Khomeini intended to annihilate the MEK. Montazeri’s letter to Khomeini in August of the same year, emphasizing that “the Mujahedin-e Khalq are a kind of ideology; killing them (is not the solution), rather they will spread,” was actually a rebuttal to a specific mandate from Khomeini. When this objective became a political policy, Khomeini’s quest to achieve his goal knew no bounds. He broke every moral, human, religious, and even the regime’s own rules – doing whatever it took, including executions of people who had already served their sentences, appalling verdicts for MEK supporters, and the rapid arrest and execution of former prisoners. To understand the big picture, a review of the various events that formed the different levels of the massacre is necessary.

Massacre in Evin and Gohardasht prisons

The most concentrated wave of killings began in Evin (northern Tehran) and Gohardasht (Karaj, near Tehran) prisons, essentially targeting members of the MEK. The executions were carried out after hasty question-and-answer exchanges between the death committee and each prisoner, and in just a few weeks the wards of both prisons were emptied of PMOI/MEK members.
In a meeting in Montazeri’s house on 15 August 1988, with four of those responsible for the massacre in Tehran and Karaj, Montazeri refers to the executions in Evin and Gohardasht as “butchery… unprecedented anywhere in the world.” One of the members of the death committee explains that every day the committee starts the interrogations in the morning and goes until 10 or 10:30 at night. Another member of the committee says that among those in line for execution, “we have some 20 plus prisoners that were imprisoned at the age of 16-17, who are now 23-24 years old.” Montazeri asks them to at least halt the executions in the month of Muharram (the month the Prophet’s grandson was martyred). They not only reject the request but also ask Montazeri to approve the execution of 200 prisoners removed from their cells for interrogation.

In a telegram to UN Secretary-General Javier Pérez de Cuéllar on 25 August 1988, the President of the National Council of Resistance of Iran (NCRI), Massoud Rajavi, revealed that “just on the 14, 15 and 16 of August, 860 bodies of executed political prisoners from Evin Prison in Tehran were taken to Behesht Zahra Cemetery. Before that, on 28 July, 200 political prisoners who supported the MEK were massacred in the central hall of Evin Prison”.
The head of the regime’s Supreme Court, Mousavi Ardebili, explained during his sermon for the Friday prayer in Tehran on 5 August 1988:
“The Judiciary is being pressured to sentence them. The Judiciary is being pressured to explain why they have not been executed… People say all of them must be executed.” He added that due to regulations, they were forced to “trail the (MEK) in groups and go back and forth with the cases,” but that now trials were no longer needed. (The state-run Jomhori Eslamin newspaper – 6 August 1988)
The death committees issued verdicts for all MEK and other dissidents after dialogues lasting 2 to 3 minutes. According to witnesses, the life or death of a MEK supporter was determined by only one criterion: how he or she declared his or her identity, as a “Mojahed” (MEK) or a “Munafeq.” (Hypoctare). This was how their death verdict was issued in unimaginable cruelty. Even though all of those being interrogated were prisoners who had already been sentenced to specific terms or rearrested after serving their sentences, death sentences were issued in contradiction to the regime’s own legal system.

Mass murder in other cities

The massacre was also carried out widely in the prisons of provincial capitals and other cities. Basically, Khomeini’s second decree focused on the “urgent” need to get the killings done, and ordered the judges not to waste any time sending the cases to the provincial capitals; the MEK were to be executed in any prison.
The most recent document in this regard is Montazeri’s exchange in an audiotape revealed in August 2016. In a meeting with four of those responsible for the massacre, he said, “They have done everything in the other cities… They say it was very brutal in Ahvaz … There was a pregnant woman among the executed in Isfahan.”
In his book, Montazeri also mentions the rushed mass executions: “Right here in Qom, one of the judiciary officials came to me and was complaining about intelligence officials who kept on saying let’s kill them fast and get rid of them all…One of the judges in the province of Khuzestan, Mr. Mohammad Hossein Ahmadi… told me they were executing them very quickly there. … Mr. Islami, the prosecutor of Fars province, brought me a file on a girl they wanted to execute. He said he had rejected executing her, but the death sentence was issued with a majority of votes.” (Hossein Ali Montazeri, memoirs, chapter 10)
Fewer documents are available regarding the wave of executions in cities other than Tehran and Karaj. Virtually no one survived the massacre in those prisons to tell the story. The list of 5,049 victims published in this report includes the names of 110 cities where killings took place. As seen in this list, the names of only a few victims have been reported. Clear information on members of the death committees, etc., are also not available to clarify the extent of the killings.

One of the most important confessions of widespread executions in Khuzestan Province is an interview by Ahmadi Shahroudi, who was the religious leader at the time. Speaking with the state-run Tasnim News Agency in 2017, he emphasized that he handled 100 cases every day, from the start of the executions until March 1989: “I continued issuing religious verdicts until early 1989. During that time, I used to visit the cities in Khuzestan, including Ahvaz, Dezfool, Masjid Soleiman, Behbahan, Shush, and Abadan. I was single then, and I used to work full-time and took care of maybe 100 cases each day… For those who maintained their views, their sentence was execution and we carried it out. Of course, we did not pass judgment, we just evaluated the situation and presented our ruling. The essential judgment was passed by the Imam (Khomeini) and we definitely defend his decree.” ( Tasnim newsagency – 8 August 2017)

Statements by former political prisoners and survivors of the massacre usually entail descriptions of their personal experiences in the cell or stories heard from others. Another important event that occurred simultaneously with the massacre was the mass arrest of political prisoners previously set free, as well as supporters of the MEK. All were rounded up and taken for execution in the prisons.
On 25 August 1988, shortly after the massacre began, NCRI President Massoud Rajavi, sent a telegram to the UN Secretary-General, revealing that simultaneous with the mass executions of prisoners, “a wave of political arrests has begun in cities across the country, which involved more than 10,000 people.” The telegram was also sent to the head of the International Committee of the Red Cross, the head of the European Parliament, and the Secretary-General of Amnesty International. Subsequently, NCRI Representative Kazem Rajavi spoke at an official meeting of the UN Working Group on Enforced or Involuntary Disappearances, held in Geneva on 15 September 1988. He said: “Concurrent with the acceptance of the Security Council Resolution, the start of the negotiations in Geneva and the beginning of the cease-fire, Khomeini’s regime focused all its wrath on the supporters of the Resistance inside Iran, in such a manner that from the day the cease-fire was announced until today, every day hundreds of people in different cities across Iran have been and are being abducted and secretly sent to the gallows or imprisoned.” (The Muslims Student Association Union newspaper – copy 147, 7 Oct. 1988)
A few months later, the PMOI/MEK obtained a classified report that revealed that “Khomeini has personally issued a decree to his judicial leaders, ordering them to arrest and execute all the supporters of the MEK released from prison after 1981”.

This aspect of the massacre has been generally covered up and except for a few references, not much has been published about it. The Montazeri audiotape mentions the case of one PMOI/MEK member in prison, whose “sister has also been convicted. They went and brought his sister. They executed him and questioned his sister (about her relationship with the MEK). She had been in prison for only a couple of days. This is a 15-16-year-old girl whose brother has just been executed. She said I am interested in them (the MEK). They said, execute her too, and they did”.
Montazeri also writes in a memo to the members of the death committee on 15 August 1988 that “we are after the former prisoners.”
Shortly thereafter, Amnesty International acknowledged the wave of arrests: “An increasing number of prisoners has been reported in the prisons in the second half of 1988. Prisoners who are claimed to have connections to opposition groups are being held without charges or sentencing. It has been reported that youths, in particular, are targets of the revolutionary guard’s street patrols, who arrest anyone considered suspicious for further investigation. These widespread arrests are carried out without any judicial supervision.” (Amnesty International, Statement 28 Jan. 1989)
In another report provided by Amnesty International to the 45th UN Human Rights Commission meeting in Geneva in early 1989: “In some cases, former political prisoners who had not engaged in illegal political activities after their release from prison, were rearrested and executed. The reports obtained by Amnesty International are from all over Iran and have been provided by families and several political groups.”

From late August, the mass killings focused on Marxist prisoners in Evin and Gohardasht prisons. To launch this wave, as also mentioned by Montazeri in his memoirs, Khomeini issued a separate fatwa.
However, this decree, like dozens of other documents related to this crime, has not yet been made public.
According to prisoners in Evin and Gohardasht prisons who witnessed the massacre, the killings started on 27 August 1988. Some also reported the start as the third week of August. The death committee asked each prisoner: Are you a Muslim? Do you pray? Do you fast? Do your parents have faith in the pillars of Islam? If the responses to these questions were seen as apostasy in the eyes of the death committee, he or she was sent to the gallows.
Some were also asked, what is your opinion about the MEK? Others were asked, are you willing to participate in the execution of a MEK member?
Prisoners not sent to the gallows were flogged brutally and forced to pray. Those who refused compulsory prayers were flogged daily. This torture was more severe for female prisoners.
The majority of killings were in Evin and Gohardasht prisons. According to prisoners in other large prisons like in Mashhad and Shiraz, fortunately, the plan to exterminate the Marxist prisoners did not take place. In other prisons such as Ahvaz or Rasht, the execution of several Marxist prisoners took place simultaneously with the MEK beginning in late July.