The People’s Mojahedin Organization of Iran (PMOI/MEK) published a report about four hidden mass graves of martyrs fallen for freedom in the city of Masjed Soleiman, southwest Iran. This new revelation once again highlights the need to hold the regime to account for its crime against humanity in 1988.

The Known Sites in Masjed Soleyman

So far, four of the suspected eight grave sites in Masjed Soleyman have been discovered. Buried in these areas are supporters of the MEK who advocated for democracy in the 1980s as well as sympathizers of other opposition groups.

These secret graves are situated in the following areas: 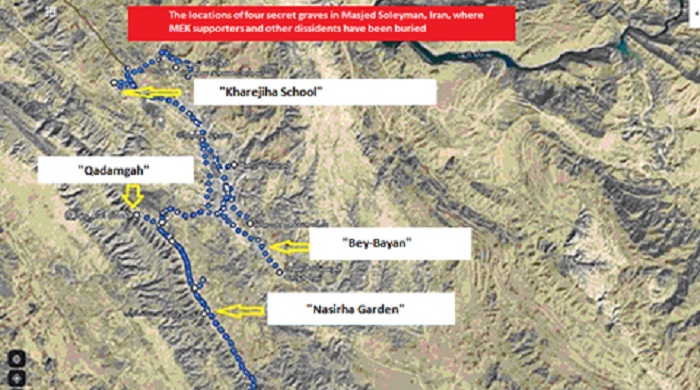 Below are more details about each of these sites:

The Grave Site of MEK Martyrs in “Kharejiha School”

The cemetery of “Kharejiha” (literally, foreigners) School, also known as the Armenian Cemetery, is situated near the Bavarsad village. The secret grave site is located in northern Masjed Soleyman after the entrance into Shooshtar near the Azad University of Masjed Soleyman. 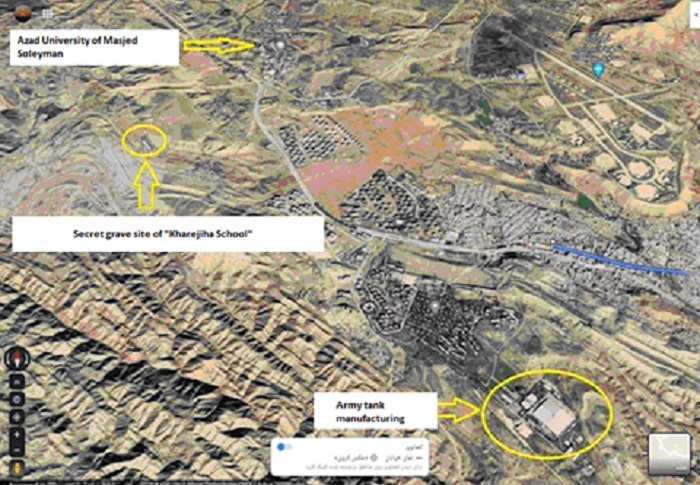 Prior to 1979, during the monarchical dictatorship, British employees of the oil industry in Masjed Soleyman, had an independent school for their children in this area. During the clerical dictatorship, this place turned into a location for executing and burying MEK supporters and other political prisoners.

Among the victims buried in this location are:

The perpetrators buried a number of people massacred in 1988 near the Armenian Cemetery in Masjed Soleyman as well. Among them is MEK supporter Ali Soltani. The regime’s agents had dug a hole in the ground that was less than a meter deep. They told his family that they had buried Ali at the Armenian Cemetery and that the family is prohibited from marking the grave with his name. Despite the regime’s pressures, Ali’s family marked the grave using cement on a number of occasions but the regime’s agents viciously destroyed them.

The Grave Site of 1988 Massacre Martyrs in Bey-Bayan

The Bey-Bayan secret graves are located in a region near the Bey-Bayan neighborhood south of Masjed Soleyman. According to families of the victims, this area is outside the Bey-Bayan Cemetery and south of the Golf Road. 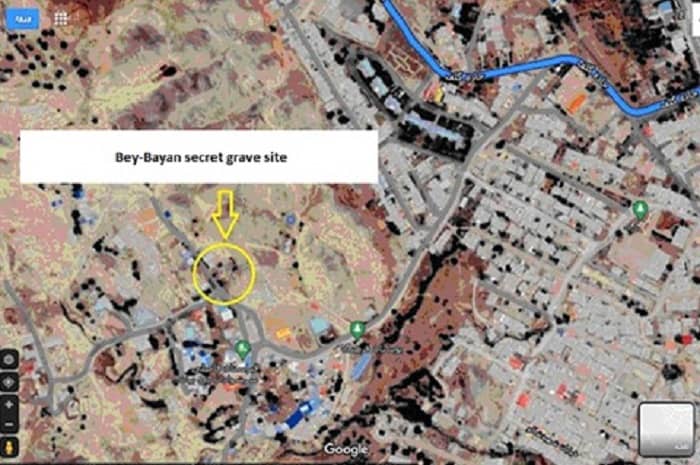 The Grave Site of MEK Martyrs in “Qadamgah” Imam Reza

The “Qadamgah” grave site is suspected to hold at least one mass grave for the victims of the 1988 massacre. The maps indicate that this location does not have access to major roads. Several trees have been planted by the Fardipour family near the site. A building indicated with a red roof in satellite imagery shows the official burial locations at the Imam Reza Cemetery. 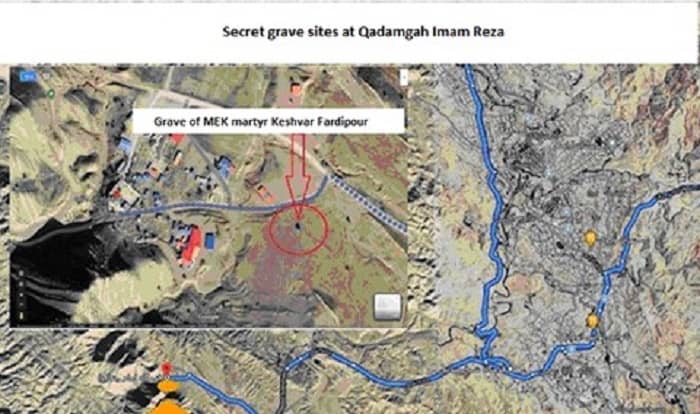 A former political prisoner who has visited the site says: The regime has buried a female MEK supporter, Keshvar Fardipour, in this location. But the families had to increase the depth of the grave themselves. The grave site is on a slope. The family were prohibited from marking the grave in anyway. The family has planted so many trees on this grave site that it stands out from every other grave in the area.

The Grave Site of Martyrs in Nasirha Garden at Ney-Nardeban 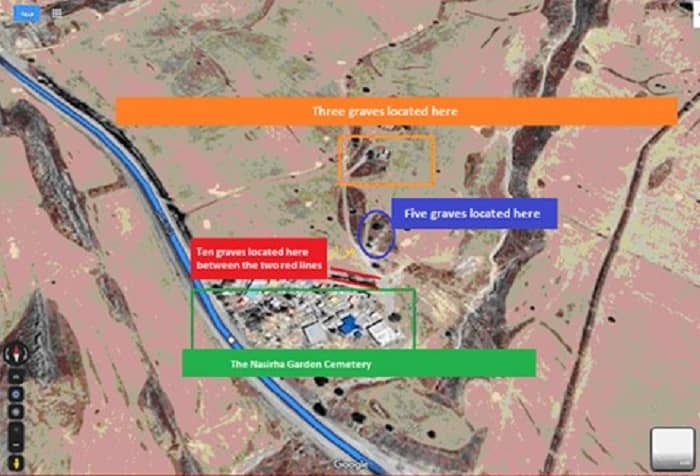 At the Ney-nardeban region and Nasirha Garden, there is a 200 m2 site that holds 18 martyrs in three separate locations. In the location of the first five graves, the following people have been buried: Shahrokh Namdari, Sabzevar Monjezi, Vahid Valivand, an individual from Lali, and Dariush Seyfi.

In the third area, three people are buried: Teymour Qanbari, Moussavi, and another person from Lali.

Some families and locals say that these three sites were located on a slope and outside the public cemetery because the regime hopes the evidence would be destroyed gradually as a result of soil erosion and rain.

In 2015, the President-elect of the National Council of Resistance of Iran (NCRI), Mrs. Maryam Rajavi, issued an international call for justice for the victims of the 1988 massacre in Iran. As part of the extensive investigations that were intensified after Mrs. Rajavi’s call, the Iranian Resistance has discovered many secret grave sites, particularly those belonging to the victims of the 1988 massacre. The relevant information has been reported to the United Nations and human rights organizations around the world.

The 1988 massacre represented a great crime against humanity perpetrated by the clerical regime in Iran. The evidence of that crime lies in the many mass graves around the country. The regime’s efforts to attempt to systematically destroy this evidence constitutes an ongoing crime against humanity. The Iranian regime and the perpetrators of this heinous massacre must be held accountable for committing the 1988 massacre. The international community should refer the case and evidence compiled to the UN Security Council for further investigation and international action.

In the summer of 1988, the Iranian authorities massacred over 30,000 political prisoners in a matter of few months. The majority of the martyrs were MEK supporters. The authorities carried out this massacre based on a fatwa by the regime’s founder Ruhollah Khomeini. Khomeini had tasked so-called “Death Commissions” with implementing his criminal decision of eliminating all political prisoners. Now many of the members of the Death Commissions, like the regime’s current head of the Judiciary, Ebrahim Raisi, hold top positions in the regime.

Iran: Who is Ebrahim Raisi?
Previous article
Iran: Coronavirus Update, Over 141,700 Deaths, November 3, 2020, 6:00 PM CET
Next article
As a Revolution Emerges in Iran, It Is Imperative for Intl Community To Support People