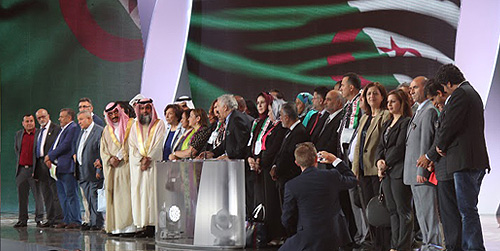 The annual Iran Freedom rally in Paris last week was host to numerous Arab delegations who were there to show their solidarity with Iran’s main opposition group, the Mujahedin-e-Khalq (MEK), in its efforts to oust the theocratic regime from power.

At the rally on June 13, Iranian opposition leader Maryam Rajavi of the National Council of Resistance of Iran (NCRI), the main opposition coalition, called for the eviction of Iran’s regime from the Middle East as the sole means to bring peace in the region and prevent the spread of nuclear proliferation.

“Today, Western policy-makers stress that ISIS and Bashar Assad are two sides of the same coin. I add that the caliph in Tehran is the godfather of both of them,” Rajavi said at the international event.

A large Arab delegation, comprising dozens of lawmakers and political dignitaries from Algeria, Bahrain, Egypt, Iraq, Jordan, Morocco, Palestine, Tunisia and Yemen, and a senior delegation from Syria’s moderate opposition were in attendance in the largest-ever gathering in support of democracy in Iran.

Rabiha Diab, a former Minister of Women’s Affairs from Palestine, called for international recognition of the Iranian Resistance under Maryam Rajavi’s leadership.

One Western analyst at the rally said the Arab delegates present were the “true representatives” of the Arab Spring.

It was announced at the meeting that a majority of lawmakers from the Parliaments of Bahrain and Jordan had signed statements in support of the platform of the Iranian Resistance and calling for international protection for MEK members under threat of Iranian-led attacks in Camp Liberty, Iraq,.

“The fact is that ISIS emerged out of the atrocities perpetrated by Bashar Assad and [former Iraqi Prime Minister Nuri] Maliki, committed on orders from the clerical regime,” Rajavi said. “I therefore call upon Western governments to refrain from taking sides with the Tehran regime.”

“In Iraq, do not collaborate with the regime’s Revolutionary Guards Corps and the so-called Shiite militias who are a hundred times more dangerous than the other henchmen.

Rajavi said the solution in Iraq and Syria is to evict Iranian forces and to support and empower local moderate Sunni groups. In Yemen, Rajavi said, the solution is for the Arab coalition to stand up to Tehran. “This must be pursued until the regime is uprooted all across the region.”

“Indeed, the solution is to evict the Iranian regime from the entire region and to topple the caliph of regression and terrorism in Iran,” she said.