Maryam Rajavi makes the tyrants in Iran tremble – US Congressman 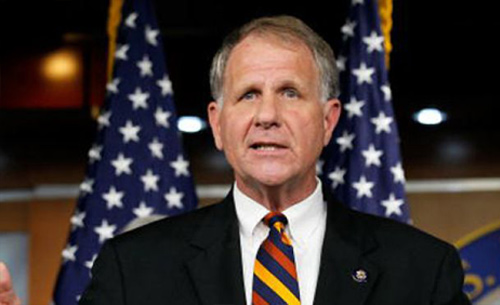 NCRI – Iranian opposition leader Mrs. Maryam Rajavi is an “inspiration” for believers of freedom, and her leadership of the Iranian Resistance “makes the tyrants in Iran tremble at night”, Rep. Ted Poe, Chairman of the US House Subcommittee on Terrorism, Nonproliferation, and Trade, has said.

Judge Ted Poe, a senior member of the House Foreign Affairs Committee, told a huge Iran Freedom rally in Paris on June 13 by video-recorded message that he supports “regime change” in Iran by the Iranian people and Resistance.

The Republican Congressman from Texas said Iran’s main opposition group the Mujahedin-e-Khalq (PMOI/MEK) was “courageous” to withstand imprisonment, exile and execution in its struggle for freedom, peace and democracy in Iran.

Text of remarks by Rep. Ted Poe (R-TX), Chairman of the US House Subcommittee on Terrorism, Nonproliferation, and Trade, June 13, 2015:

Hi, I’m Congressman Ted Poe from Texas. I bring you warm greetings from your friends and freedom loving allies in America but I’m sorry I could not be there with you all today. I want to thank the Organization of Iranian-American Communities for the work it does in promoting freedom for the good people of Iran that are held hostage by radicals. Your organization is a pillar for democratic change in a time of turmoil. The threat of Iran is nothing to be taken lightly. The conniving supreme leader says he wants peace but that’s just not the truth.

Iran is a state sponsor of terrorism. In fact the government is leading the world in sponsoring terror throughout other nations. It uses radical Islam to try to conquer the Middle East letting nothing stand in its way and those who don’t agree are imprisoned or executed or they just disappear. Human rights are nonexistent in Iran and there’s no such thing as freedom of the press, freedom of speech or freedom of religion. Iran is not a land of freedom; it’s a land of oppression. Groups like the MEK who have risen up in opposition have seen this first hand. You have been jailed, exiled and some members have been executed for protesting a dictatorship. Nothing about Iran is peaceful. The fact that you have all come together here to stand for freedom, peace and democracy is important but also courageous.

The United States is in nuclear weapons talk trying to make a deal with Iran. A nuclear Iran is not only a threat to the Middle East but to America as well. But in my opinion, any deal with Iran is going to be a bad deal. On all fronts Iran is a ticking time bomb that must be disassembled. I serve as Chairman of the subcommittee on terrorism and recently my subcommittee had a hearing on ISIS and its radical Islamic beliefs. Madam Rajavi testified and told the world how ISIS and Iran have a lot in common, and I want to thank her for outlining to the world the threat of ISIS. She is a true inspiration for all who believe in freedom, and her leadership makes the tyrants in Iran tremble at night. To counter Iran’s Islamic extremism, she said, the ultimate solution is regime change, and I agree. Change must happen by the Iranian people and the Resistance.

One day I believe we will not be talking about making sure Iranian freedom fighters have a safe place to live. One day, and I hope this day is soon, the supreme leader will supremely fall. Democracy and freedom will once again flourish in Iran, and the freedom fighters can finally return home to join their families and their countrymen in building a new and peaceful nation. So thank you to OIAC for being a voice of hope, a voice of freedom and a voice for all people who live in tyranny and want to be free, and that’s just the way it is.