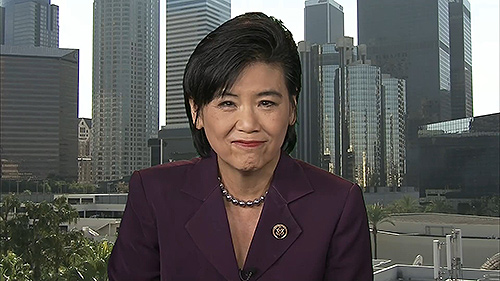 United States Congresswoman Judy Chu has said that she is working in Congress to ensure the security or members of the main Iranian opposition group, the Mujahedin-e-Khalq (PMOI/MEK), in Camp Liberty, Iraq, who are currently in danger due to their opposition to the Iranian regime.

Rep. Judy Chu, a member of the House Judiciary Committee, told a huge Iran Freedom rally in Paris on June 13 by video-recorded message that human rights abuses in Iran continue to worsen and that Congress has condemned the high frequency and increase in the death penalty.

Attacks on the MEK in Iraq by proxies of the mullahs’ regime in Iran since 2009 have led to 116 deaths. A further 26 MEK members have died of lack of timely medical treatment due to the medical siege imposed by the Iraqi authorities. In 2004, the US government recognized Camp Liberty residents as “Protected Person” under the Fourth Geneva Convention. In 2011, the UN High Commissioner for Refugees (UNHCR) recognized the residents as asylum seekers with protections under international law.

Hello, I’m Congresswoman Judy Chu from California, I’m sorry I could not join you today in Paris but I’m proud to stand with you here in Washington, DC in your fight for human rights and freedom in Iran and the Middle East. The world has watched as human rights abuses in Iran continue to worsen. Basic liberties are still denied, and those who speak out are locked away or worse. Iran’s human rights abuses extend beyond just imprisonment; they are a global leader in executions, second only to China in the world.Contrary to our hopes for change, executions are actually on the rise in Iran. What crimes merit this most cruel and severe punishment? Among the top five reasons for receiving the death penalty in Iran are heresy, homosexuality and drug offenses. In fact of the over 300 executions carried out in Iran in just the first five months of 2015 almost 250 of them were for drug offenses alone. This is truly alarming. Not only that, but Iran is trying to export this brand of justice by extending its influence in the region.But Iran’s leaders are not able to abuse their citizens unnoticed. The UN has noted the high frequency and increase in the death penalty, the US Congress has condemned it and today you are making sure that all eyes are on the human rights abuses there.

We must remember that the fight is not over. Iranians throughout the country are arrested and even killed simply because they disagree with the ruling party, and in Iraq the residents of Camp Liberty are targets. The threat to Liberty residents is real. That is why I am working in Congress to ensure the security and safety of residents of Camp Liberty by allowing them to be relocated outside of Iraq as refugees. We must do all we can to ensure that no more innocent lives are lost. Thank you for your tireless advocacy on behalf of human rights in Iran today and every day.