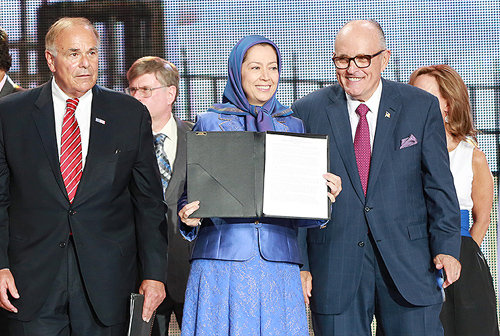 Attending the June 13 rally of the Iranian Resistance in Paris, Ambassador Kenneth Blackwell, one of the many American delegates to the event, in an article published on Investors.com shared his thoughts about the conference.
He noted how the crowd coming from different political viewpoints had gathered together for one worthy cause- to support the Iranian Resistance.

Delegates of the conference participated in the event to listen to several speeches “on a variety of topics related to Iran’s repressive and aggressive behavior, its nuclear program and the insufficient international response to all of these misdeeds.”

Blackwell quoted one of the speakers: “In his speech to the crowd at Saturday’s rally, former New York City Mayor Rudy Giuliani glanced at the members of the American delegation standing on the stage with him and declared, “I can’t think of anything else these people behind me agree on.”

“In his speech at the event, Richardson pointed out that he had been attending the annual event for five years and that it had gotten bigger with each successive year. But Richardson also emphasized the growth in diversity both on the stage and in the crowd, noting that the massive assemblage of Iranian expatriates from across the globe was joined by activist supporters holding a wide variety of other ethnicities.”

“The evidence for this is clear: Although the MEK and the NCRI do not have nearly as many advocates in the West as they deserve, those who have shown their support at each year’s Iran freedom rally represent an astonishingly diverse range of political viewpoints.”

Blackwell acknowledged how the U.S. failed to do its responsibility in sufficiently responding to the call of the Iranian resistance “leaving behind members of the People’s Mojahedin Organization of Iran (MEK), who had been offered promises of protection during the Iraq War.”