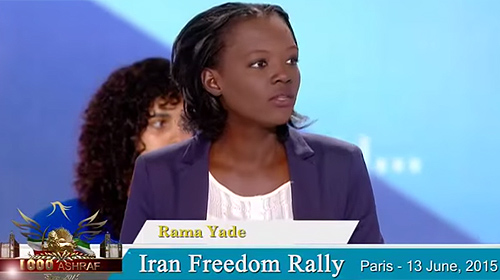 Rama Yade, a member of Nicolas Sarkozy’s government until 2010, made the remarks on June 13 in Iran Freedom rally organized by the Iranian opposition in Paris (Villepinte).

The huge rally brought together more than 600 political dignitaries and international lawmakers in support of the opposition’s call for “regime change” and Maryam Rajavi’s 10-point plan for a future free Iran.

Rama Yade described participants at the convention as the “voice of the Iranian people” and “defenders of freedom” rallying for “democratic change”.

“You are rallying behind President Rajavi who tirelessly shows you the way to freedom,” Ms. Yade said.

She said the pro-democracy supporters at the Iran Freedom rally represent the people inside Iran “who are under the oppression of this regime and whose rights are being violated.”

“Your presence here is a sign of the Iranian people’s desire for change.”

Ms. Yade congratulated the Iranian Resistance for the decision of the French Judiciary last September to clear it of all allegations of terrorism. “This is a big victory”, she said, pointing out that the original allegation had been unjust.

Ms. Yade also warned that a possible upcoming nuclear agreement between world powers and the Iranian regime over its nuclear proliferation allowing it to continue uranium enrichment in violation of UN Security Council sanctions was “dangerous.”

“The Iranian regime has remained a dangerous threat for human rights in Iran and beyond its borders.

“This [agreement] will affect everyone in the region. It is unacceptable to remain silent in the face of this dangerous policy mistake,” she said.