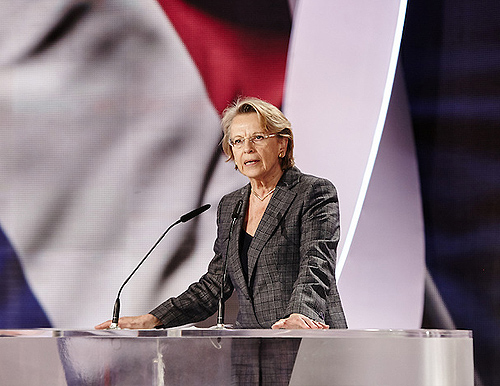 Michèle Alliot-Marie, a Member of the European Parliament and former French Minister of Foreign Affairs, Defense, Interior and Justice (2002-2011), participated in the annual Iran Freedom rally in Paris on June 13, entitled: “United against Islamic fundamentalism and for democratic change in Iran.” The following is the full text of her speech:

Dear Maryam Rajavi, if so many of us are gathered here today – both our Iranian friends and we who have come from so many other countries – it is because in our eyes you are a woman of courage and conviction, and the issues you raise and the values that you carry are also ours.

Much of these tensions and risks are arising in the Middle East, which are costing us dearly. Unfortunately, for years Iran has contributed to the destabilization of the region and the world. Not your Iran, with its history, its grandeur, and the intellect of its people. But a regime that represents a real danger to the world.

Its first danger is the threat of nuclear proliferation which inevitably will encourage other countries into acquiring nuclear weapons as well. And worse, it is a regime that supports movements which destabilize its neighbors.

If we want to escape a fatal spiral that will lead to the destruction of this region and our whole world, we must act. I say to all those who have come from all the countries, we must act quickly. We must act clearly and unambiguously.

Iran must also end its destabilizing activities in other countries through its support of armed groups and terrorist groups. The coalition of Arab countries against Daech and in Yemen was a first. This is an important signal, especially considering the disagreements that exist between the governments of these countries. It must be seen as a strong signal. It is a symbol of a desire not to let things unravel.

Yes, Iran is a great country whose history reveals its richness, a strong country full of the intellect of its men and its women. We need Iran to establish more progress and stability in the region and the world. But Iran will only succeed in this mission if it renounces actions today that marginalize it in the international community.

It will only do so if it implements the values of freedom, equality between men and women, respect, tolerance, secularism and democracy. These are the values, Madam President, that you carry and which we approve.”